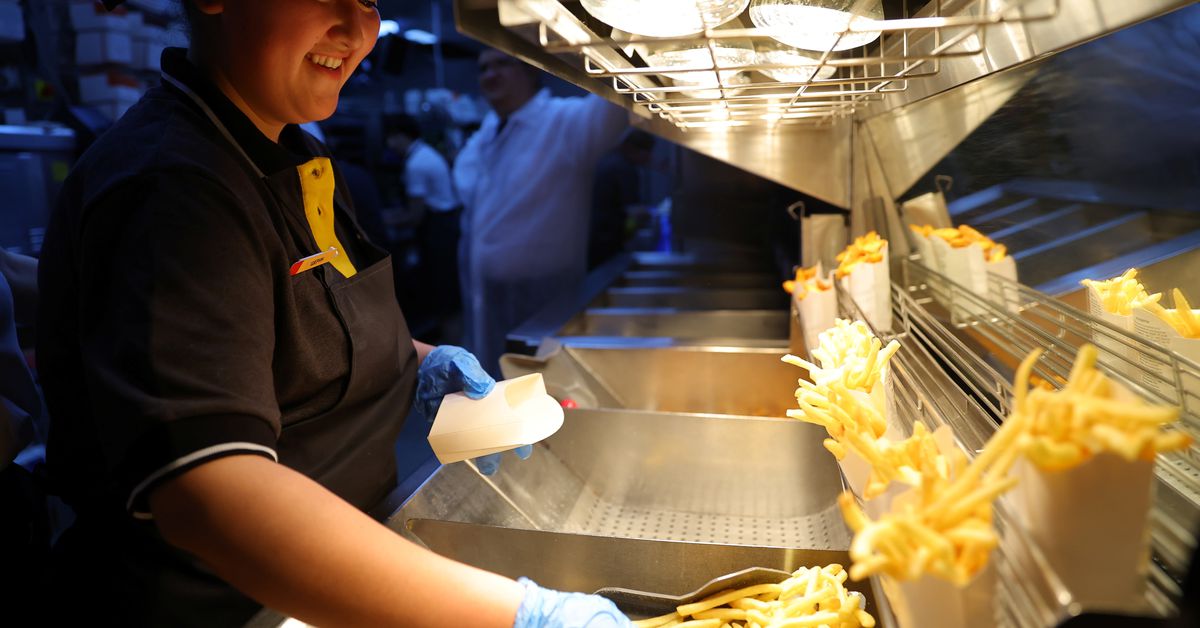 MOSCOW, July 15 (Reuters) – The head of the company now running the former McDonald’s Corp chain of restaurants in Russia told RBC TV that producers of French fries are refusing to supply to the country and warned that attempts to increase domestic processing are fraught with difficulties.

McDonald’s quit Russia after a Western backlash against Moscow’s military campaign in Ukraine, which included a barrage of economic sanctions, and sold all the restaurants it owned to a local licensee in May.

Restaurants began opening under the new name Vkusno & tochka, or “Tasty and that’s it”, on June 12. CEO Oleg Paroev told Reuters the chain had sold almost 120,000 burgers on opening day.

The new ownership was keen to stress that high quality standards would be maintained or even bettered, and that consumers would not notice much difference. It has since been forced to admit that it is facing a shortage of French fries until autumn, blaming a poor harvest in Russia and supply chain woes. read more

“What has happened now is that due to well known events many foreign companies, I would even say all major producers of fries, have refused to deliver this product to Russia,” Paroev told RBC TV, a business channel, late on Thursday.

Paroev said that factories in both “friendly” and “unfriendly” countries that produce fries belong to five or six major companies, whose headquarters are based in unfriendly nations and which have therefore refused to supply to Russia.

Moscow deems countries that have imposed sanctions against Russia over its actions in Ukraine as “unfriendly”.

Paroev said there was a shortage in Russia’s harvest this year of the specific potatoes needed for French fries and that other issues could arise, with only a few enterprises capable of processing potatoes for French fries in Russia.

MIAMI--(BUSINESS WIRE)--Intelli Smart Homes, the leading smart home technology company, has been recognized as one of America’s fastest-growing … END_OF_DOCUMENT_TOKEN_TO_BE_REPLACED

Customers outside a Walmart store in Torrance, California, US, on Sunday, May 15, 2022. Walmart Inc. is scheduled to release earnings figures on May … END_OF_DOCUMENT_TOKEN_TO_BE_REPLACED

The past few years have been brutal on homebuyers' budgets. Would-be buyers have been priced out of some of the most desirable neighborhoods thanks to … END_OF_DOCUMENT_TOKEN_TO_BE_REPLACED