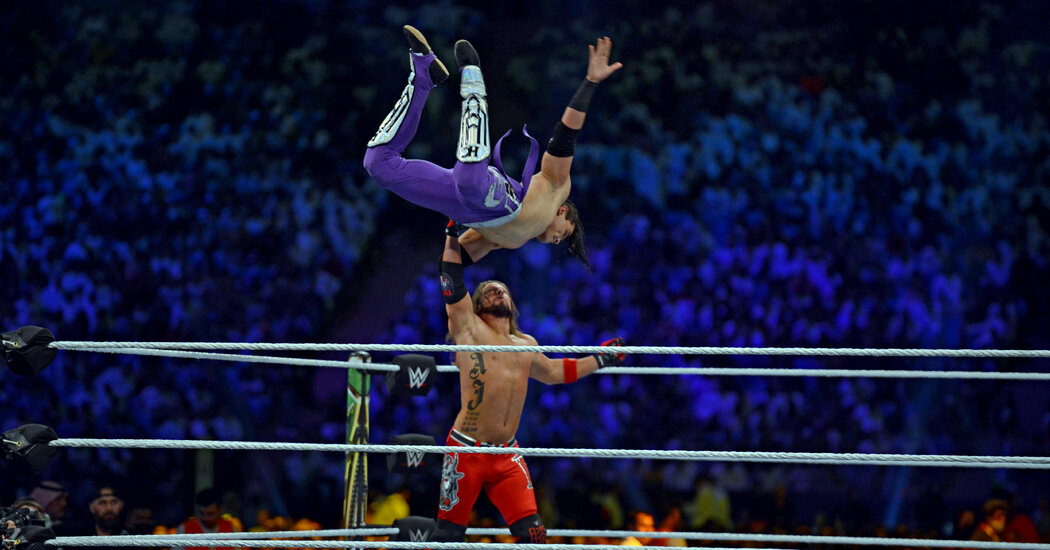 Fans of the WWE Network have seen and heard racist tropes in the ring for years.

In 1990, during a showdown between Roddy Piper and Bad News Brown, a Black wrestler, Mr. Piper, who is white, showed up to the match with half his face painted black.

In 2005, Vince McMahon, the chief executive of WWE, used a racial slur repeatedly in a prepared skit.

Until recently, those segments were available to watch on the WWE Network, which allowed subscribers to revisit old episodes and seasons of WrestleMania going back to the 1980s. But this month, after WWE episodes began moving to Peacock, NBCUniversal’s fledgling streaming service, longtime viewers of wrestling noticed they could not find either segment.

“The whole match is gone,” said Christopher Jeter, 30, who has watched professional wrestling since he was 10 and now writes about it for Daily DDT, a news and opinion site about WWE. “I wouldn’t say it’s a big loss.”

NBCUniversal said that Peacock was “reviewing WWE content to ensure it aligns with Peacock’s standards and practices,” as it does other shows and films on the platform.

said in January that Peacock had acquired exclusive streaming rights to WWE Network content through a multiyear agreement.

In March, the company announced that Peacock would feature WWE “fan-favorite content at launch, including all past WrestleManias leading up to WrestleMania 37.”

The company said that Peacock would continue to add WWE Network content to its library, making the entire archive available to fans.

The removal of the segments come as other streaming services and entertainment companies have sought to give audiences context for older films and television shows that feature offensive content.

Disney’s streaming service includes a 12-second disclaimer that cannot be skipped before films like “Dumbo” and “Peter Pan” that tells viewers they will see “negative depictions” and “mistreatment of people or cultures.”

Turner Classic Movies showed 18 classic films, including “The Jazz Singer” and “Breakfast at Tiffany’s,” that were preceded by commentary from film experts who prepared viewers for scenes they could find jarring or upsetting.

HBO Max initially removed “Gone With the Wind” from its streaming service, then added it again with a four-minute introduction by the TCM host Jacqueline Stewart, who explains the enduring cultural importance of the film even as it “denies the horrors of slavery as well as its legacies of racial inequality.”

Last June, an NBC spokesman said four episodes of “30 Rock” that featured blackface were being removed from circulation at the request of Tina Fey, the show’s creator, and Robert Carlock, an executive producer and showrunner.

Mr. Jeter, the WWE fan who writes about wrestling, said that racist and sexist depictions of women, Black people and other people of color have long been a part of professional wrestling.

“It became such a part of watching the product that it became expected,” he said. “But it’s not why I watch wrestling.”

Most fans, he said, watch wrestling because they enjoy the combination of athleticism and dramatic storytelling. The racist tropes were often a distraction from that, Mr. Jeter said.

“I’m sure there are fans who are saying, ‘Why are you censoring?’” he said. “But it really isn’t a big deal that they’re getting rid of these stories and segments that haven’t really aged well, and weren’t really good at the time.”

MIAMI--(BUSINESS WIRE)--Intelli Smart Homes, the leading smart home technology company, has been recognized as one of America’s fastest-growing … END_OF_DOCUMENT_TOKEN_TO_BE_REPLACED

Customers outside a Walmart store in Torrance, California, US, on Sunday, May 15, 2022. Walmart Inc. is scheduled to release earnings figures on May … END_OF_DOCUMENT_TOKEN_TO_BE_REPLACED

The past few years have been brutal on homebuyers' budgets. Would-be buyers have been priced out of some of the most desirable neighborhoods thanks to … END_OF_DOCUMENT_TOKEN_TO_BE_REPLACED