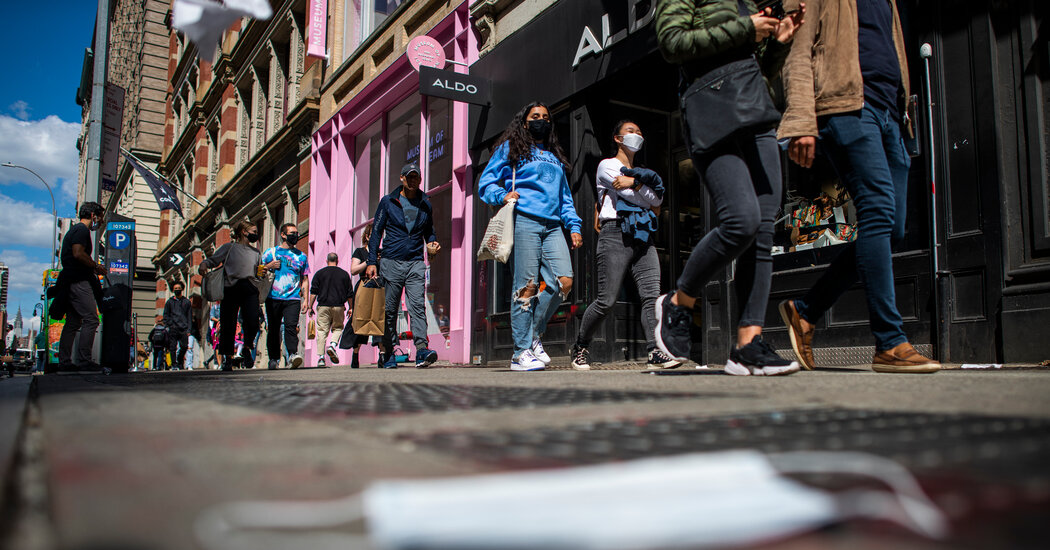 Retail sales were flat last month after a buoyant March, the Commerce Department said on Friday, as Americans continued spending their latest round of government stimulus checks.

The pace for April was a slowdown from the prior month, when retail sales rose by 10.7 percent, as vaccinations increased and people became more comfortable outside their homes, spending more money on clothing, restaurants, bars and sporting goods. Retail sales, which experienced record drops just over a year ago at the onset of the pandemic, have been closely watched as monthly gauges of the health of the economy and the mind-set of consumers.

job growth slowed in April, a surprise to many economists, while the jobless rate rose slightly to 6.1 percent. The data served as a reminder of the fitful economic recovery and that stimulus money can only go so far.

“Labor market income will become increasingly important in sustaining consumer confidence and spending over the coming months,” the Morgan Stanley economists wrote in a May 7 note.

Retail sales increased in April in categories including restaurants and bars, which posted a 3 percent gain, as well as electronics and appliance stores and grocery stores. Declines were seen in a broad array of categories, including apparel, gas stations, sporting goods and book stores and department stores.

Still, the broader picture is sunny compared with April 2020. Spending at clothing and accessories stores was up more than 700 percent last month, compared with a year earlier, while furniture and home furnishing stores had gone up nearly 200 percent — staggering figures that were a reminder of just how devastating the pandemic was to many parts of the retail industry.

“What we need to remember is retail sales went up a crazy amount in March because of the stimulus, and it’s kind of like they’re stuck up there, so that’s good,” Mr. Frick said. “That means people have continued spending at that high rate.”

AUSTIN, Texas--(BUSINESS WIRE)--As the first multifamily management company to be recognized in the Public Relations and Marketing Excellence Awards, … END_OF_DOCUMENT_TOKEN_TO_BE_REPLACED

There have been whispers of cooling housing and rental prices in the San Francisco Bay Area, but that hasn't yet translated into practical, noticeable … END_OF_DOCUMENT_TOKEN_TO_BE_REPLACED

Cars pass in Independence Square at twilight in Kyiv, Ukraine, Monday, Oct. 31, 2022. Rolling ... [+] blackouts are increasing across Ukraine as the … END_OF_DOCUMENT_TOKEN_TO_BE_REPLACED