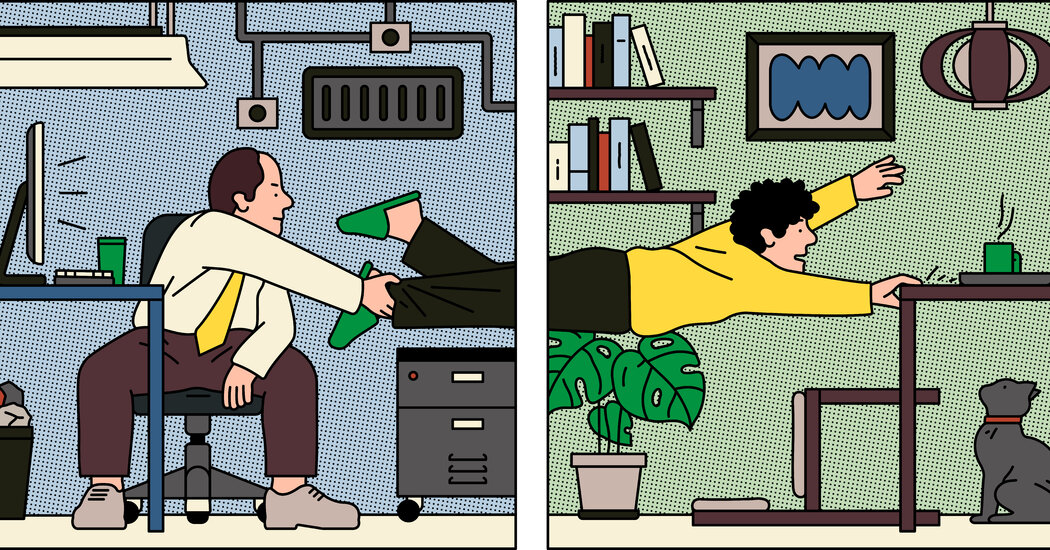 David Gross, an executive at a New York-based advertising agency, convened the troops over Zoom this month to deliver a message he and his fellow partners were eager to share: It was time to think about coming back to the office.

Mr. Gross, 40, wasn’t sure how employees, many in their 20s and early 30s, would take it. The initial response — dead silence — wasn’t encouraging. Then one young man signaled he had a question. “Is the policy mandatory?” he wanted to know.

Yes, it is mandatory, for three days a week, he was told.

Thus began a tricky conversation at Anchor Worldwide, Mr. Gross’s firm, that is being replicated this summer at businesses big and small across the country. While workers of all ages have become accustomed to dialing in and skipping the wearying commute, younger ones have grown especially attached to the new way of doing business.

And in many cases, the decision to return pits older managers who view working in the office as the natural order of things against younger employees who’ve come to see operating remotely as completely normal in the 16 months since the pandemic hit. Some new hires have never gone into their employers’ workplace at all.

banking and finance, are taking a harder line and insisting workers young and old return. The chief executives of Wall Street giants like Morgan Stanley, Goldman Sachs and JPMorgan Chase have signaled they expect employees to go back to their cubicles and offices in the months ahead.

Other companies, most notably those in technology and media, are being more flexible. As much as Mr. Gross wants people back at his ad agency, he is worried about retaining young talent at a time when churn is increasing, so he has been making clear there is room for accommodation.

“We’re in a really progressive industry, and some companies have gone fully remote,” he explained. “You have to frame it in terms of flexibility.”

In a recent survey by the Conference Board, 55 percent of millennials, defined as people born between 1981 and 1996, questioned the wisdom of returning to the office. Among members of Generation X, born between 1965 and 1980, 45 percent had doubts about going back, while only 36 percent of baby boomers, born between 1946 and 1964, felt that way.

most concerned about their health and psychological well-being,” said Rebecca L. Ray, executive vice president for human capital at the Conference Board. “Companies would be well served to be as flexible as possible.”

Matthew Yeager, 33, quit his job as a web developer at an insurance company in May after it told him he needed to return to the office as vaccination rates in his city, Columbus, Ohio, were rising. He limited his job hunting to opportunities that offered fully remote work and, in June, started at a hiring and human resources company based in New York.

“It was tough because I really liked my job and the people I worked with, but I didn’t want to lose that flexibility of being able to work remotely,” Mr. Yeager said. “The office has all these distractions that are removed when you’re working from home.”

Mr. Yeager said he would also like the option to work remotely in any positions he considered in the future. “More companies should give the opportunity for people to work and be productive in the best way that they can,” he said.

Even as the age split has managers looking for ways to persuade younger hires to venture back, there are other divides. Many parents and other caregivers are concerned about leaving home when school plans are still up in the air, a consideration that has disproportionately affected women during the pandemic.

At the same time, more than a few older workers welcome the flexibility of working from home after years in a cubicle, even as some in their 20s yearn for the camaraderie of the office or the dynamism of an urban setting.

I get to exercise in the morning, have breakfast with my kids, and coach little league in the evenings. Instead of sitting in an office building I get to wear shorts, walk our dog, and have lunch in my own kitchen.” Chad, Evanston, Ill.

“With the leverage that employees have, and the proof that they can work from home, it’s hard to put the toothpaste back in the tube,” he said.

Fearful of losing one more junior employee in what has become a tight job market, Mr. Singer has allowed a young colleague to work from home one day a week with an understanding that they would revisit the issue in the future.

doctrinaire view that folks need to be in the office.”

Amanda Diaz, 28, feels relieved she doesn’t have to go back to the office, at least for now. She works for the health insurance company Humana in San Juan, P.R., but has been getting the job done in her home in Trujillo Alto, which is about a 40-minute drive from the office.

Humana offers its employees the option to work from the office or their home, and Ms. Diaz said she would continue to work remotely as long as she had the option.

“Think about all the time you spend getting ready and commuting to work,” she said. “Instead I’m using those two or so hours to prepare a healthy lunch, exercising or rest.”

Alexander Fleiss, 38, chief executive of the investment management firm Rebellion Research, said some employees had resisted going back into the office. He hopes peer pressure and the fear of missing out on a promotion for lack of face-to-face interactions entices people back.

“Those people might lose their jobs because of natural selection,” Mr. Fleiss said. He said he wouldn’t be surprised if workers began suing companies because they felt they had been laid off for refusing to go back to the office.

Mr. Fleiss also tries to persuade his staff members who are working on projects to come back by focusing on the benefits of face-to-face collaborations, but many employees would still rather stick to Zoom calls.

The Seattle Seahawks are very much still in the running for Baker Mayfield. (Photo by Stacy ... [+] Revere/Getty Images) Getty Images The Seattle … END_OF_DOCUMENT_TOKEN_TO_BE_REPLACED

(CNN) — Kim Kyung-seop recalls going to cheap bars after class with his friends, where they binged on as much makgeolli as possible. "You know the … END_OF_DOCUMENT_TOKEN_TO_BE_REPLACED