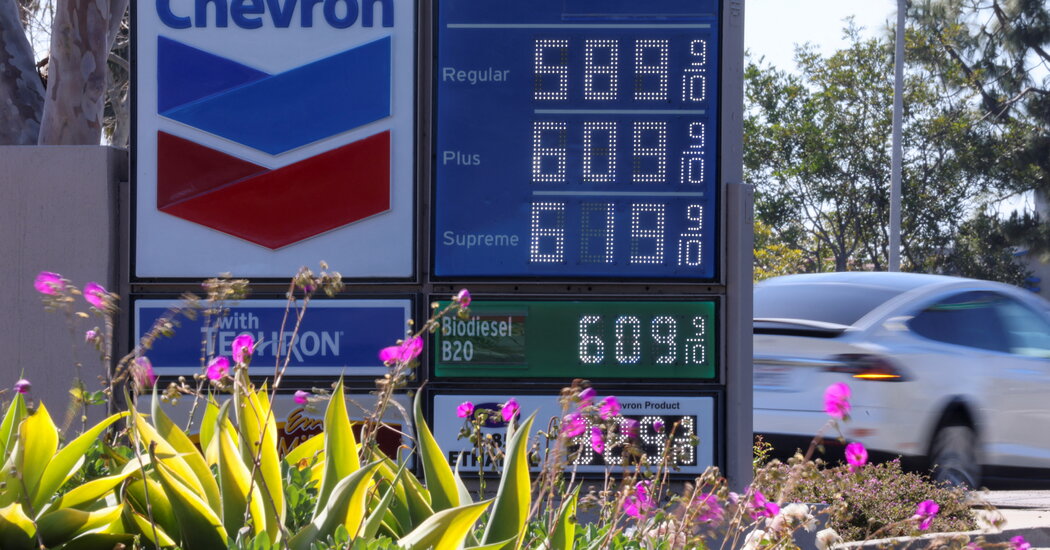 After months of working from home, Caroline McNaney, 29, was excited about going back to work in an office, even if her new job in Trenton, N.J., meant commuting an hour each way.

But when she spent $68 filling the tank of her blue Nissan Maxima this week, she felt a surge of regret about switching jobs.

“Is this for real?” Ms. McNaney recalled thinking. “I took a job further from home to make more money, and now I feel like I didn’t do anything for myself because gas is so high.”

The recent rise in gas prices — which the war in Ukraine has pushed even higher — has contributed to her sense of disappointment with President Biden. “I feel like he wants us to go out and spend money into the economy, but at the same time everything is being inflated,” she said.

While oil prices worldwide have shot up since the Russian invasion of Ukraine, President Biden and Democrats, who hold control of Congress, have faced consumers’ ire.

Cat Abad, 37, who lives in the San Francisco area, where prices have hit nearly $6 for the highest-grade gas, said she saw stickers on the pumps at one local station saying that Mr. Biden was responsible for the rise. She took the stickers off, she said, believing that he was not at fault.

Still, she said, “It’s a good time to have a Prius,” as she filled up for her commute down the peninsula to Foster City.

Inflation is already proving a perilous issue for Mr. Biden and fellow Democrats as the midterm elections approach, with many voters blaming them for failing to control the rising cost of living. The higher gas prices add further political complexity for Mr. Biden, who has vowed to curb the nation’s dependence on fossil fuels.

In light of the war in Ukraine, the energy industry is pushing the Biden administration to support more domestic oil production by opening up drilling in federal lands and restarting pipeline projects.

“This moment is a reminder that oil and natural gas are strategic assets and we need to continue to make investments in them,” said Frank Macchiarola, a senior vice president at the American Petroleum Institute, a trade group.

There is a chance that the strain on consumers may be temporary as global oil supply and demand are rebalanced. And, in the near term, lower consumer spending may have some benefits. Reduced spending could help constrain inflation, but at the expense of slower economic growth.

Even before Russia invaded Ukraine, rapidly rising energy prices were contributing to the fastest inflation in 40 years. Energy prices — including not just gasoline but home heating and electricity as well — accounted for more than a sixth of the total increase in the Consumer Price Index over the 12 months ending in January.

The recent jump in energy prices will only make the problem worse. Forecasters surveyed by FactSet expect the February inflation report, which the Labor Department will release on Thursday, to show that consumer prices rose 0.7 percent last month, and are up 7.9 percent over the past year. The continued run-up in gasoline prices over the past week suggests overall inflation in March will top 8 percent for the first time since 1982.

Some drivers said the higher gas prices were a necessary result of taking a hard line on Mr. Putin.

Alan Zweig, 62, a window contractor in San Francisco, said: “I don’t care if it goes to $10 a gallon. It’s costing me dearly, but not what it’s costing those poor people in Ukraine.”

Destiny Harrell, 26, drives her silver Kia Niro hybrid about 15 minutes each day from her home in Santa Barbara to her job at a public library. She is now considering asking her boss if she can spend some days working from home.

She said the rise in prices has contributed to her anger at Mr. Putin and his decision to invade Ukraine.

“It’s super frustrating that a war that shouldn’t even really affect us has global reach.”

AUSTIN, Texas--(BUSINESS WIRE)--As the first multifamily management company to be recognized in the Public Relations and Marketing Excellence Awards, … END_OF_DOCUMENT_TOKEN_TO_BE_REPLACED

There have been whispers of cooling housing and rental prices in the San Francisco Bay Area, but that hasn't yet translated into practical, noticeable … END_OF_DOCUMENT_TOKEN_TO_BE_REPLACED

Cars pass in Independence Square at twilight in Kyiv, Ukraine, Monday, Oct. 31, 2022. Rolling ... [+] blackouts are increasing across Ukraine as the … END_OF_DOCUMENT_TOKEN_TO_BE_REPLACED