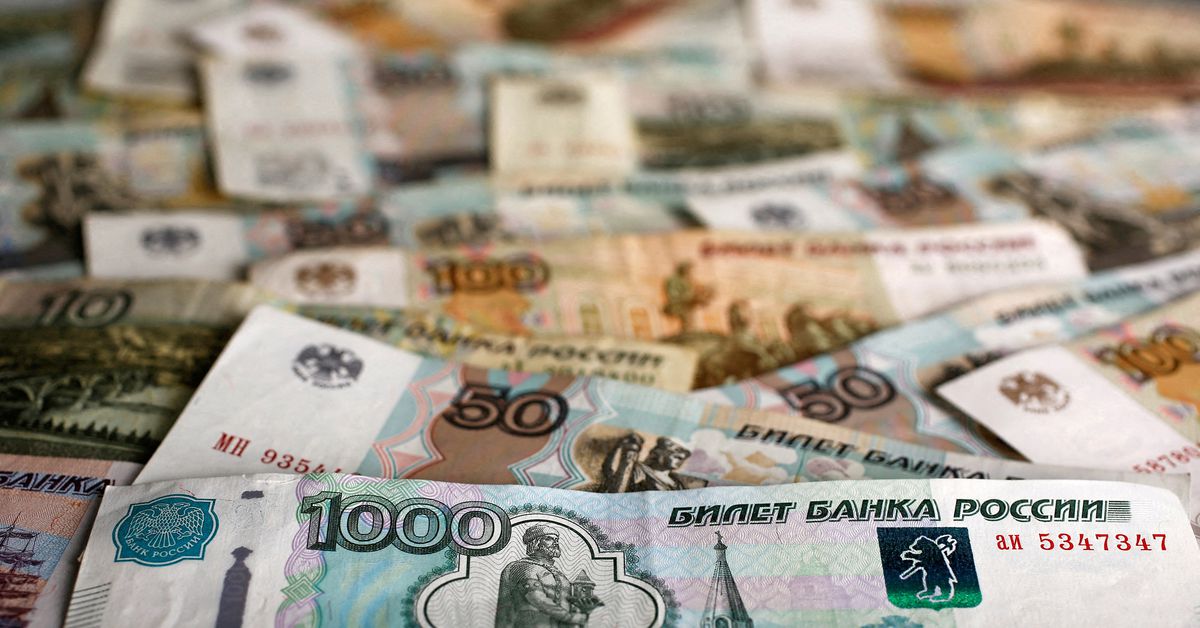 May 27 (Reuters) – The Russian rouble extended its losses on Friday after plunging in the previous session as the country’s central bank slashed interest rates, signalling more cuts, and the prospect of easing capital controls and a possible sovereign default hammered the currency.

The rouble slumped around 10% to the dollar and euro on Thursday after the central bank lowered its key rate to 11%, the third 300-basis-point cut in a row, as inflation slows from more than 20-year highs. read more

As the rouble continued swinging this way and that on Friday, Prime Minister Mikhail Mishustin said the government wanted to avoid currency volatility, a sign that Moscow is not entirely comfortable with the rouble’s seemingly uncontrollable moves.

Propped up by capital controls, the rouble had artificially risen to become the world’s best-performing currency so far this year until this week’s slide. New gas payment terms requiring conversion of foreign currency into roubles and a fall in imports have also helped.

But it has now lost the support of the month-end tax period that usually sees export-focused companies convert foreign currency into roubles to pay local liabilities.

“The rouble has to be within some reasonable limits,” he said.

Reshetnikov, who also praised the central bank’s rate cut hoping it will spur lending activity, has said he expects the mandatory proportion of foreign currency revenue that exporters must convert into roubles to be cut further from 50%.

Market eyes are focused on Russia’s National Settlement Depository (NSD), which has promised to make interest payments on Friday worth $71.25 million and 26.5 million euros ($28.5 million) on two Eurobonds , . read more

That is in spite of Washington deciding against extending a key licence that had allowed Moscow to keep paying bondholders despite the sanctions imposed over its actions in Ukraine, putting Russia on the cusp of a unique kind of debt crisis. read more

Reporting by Reuters; Editing by Nick Macfie and Maju Samuel

The poshest place in California's Coachella Valley is The Madison Club. This exclusive gated community in La Quinta is where A-listers and tycoons … END_OF_DOCUMENT_TOKEN_TO_BE_REPLACED

KOROPY, Ukraine — Four men tugged at long strips of fabric to lift a coffin out of the gaping hole in the backyard of a small house. They flung the … END_OF_DOCUMENT_TOKEN_TO_BE_REPLACED