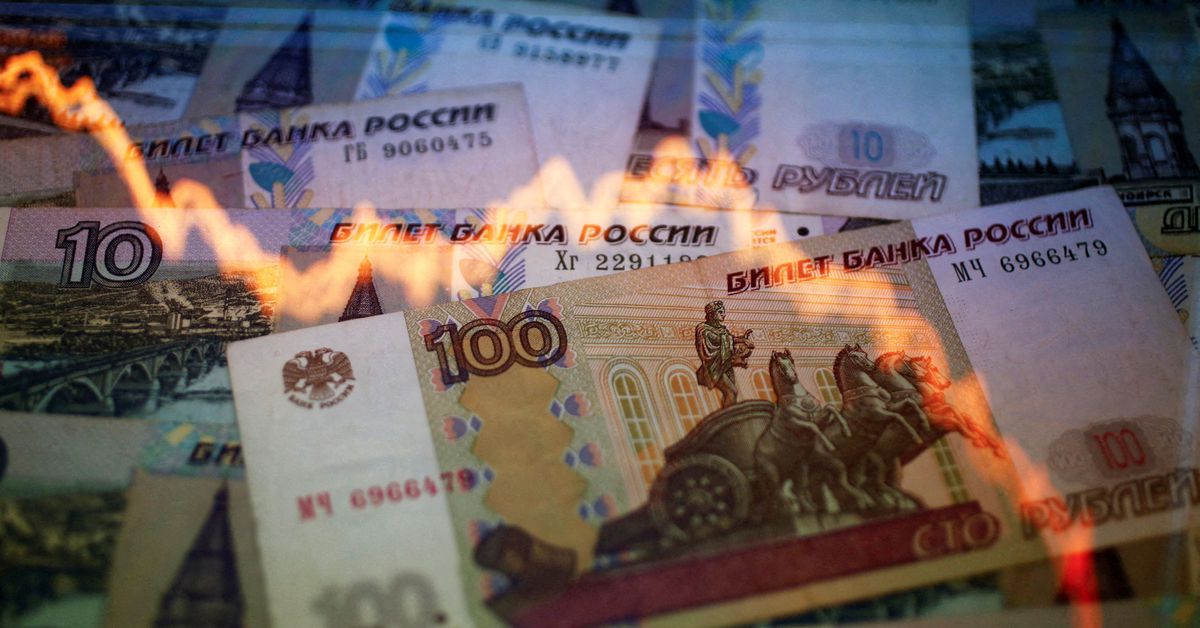 A reflection of a yearly chart of U.S. dollars and Russian roubles are seen on rouble notes in this photo illustration taken in Warsaw November 7, 2014. REUTERS/Kacper Pempel

May 17 (Reuters) – The Russian rouble weakened on Tuesday, stepping away from near five-year highs against the euro, after the central bank eased some capital controls that were the main driver of its strength in the past few weeks.

The rouble has become the world’s best-performing currency this year despite a full-scale economic crisis, although this is because of artificial support from controls that Russia imposed to shield its financial sector in late February after it sent tens of thousands of troops into Ukraine.

The rouble pared gains after the central bank raised the ceiling for cross-border transactions, allowing Russian residents and non-residents from friendly states to channel foreign currency abroad at an amount equivalent to up to $50,000 a month, from the previous limit of $10,000.

The bank’s decision is unlikely to immediately change the balance of power in the market, where export-focused companies are obliged to convert 80% of their revenues as the central bank can not intervene itself after the West froze about half of its gold and foreign exchange reserves.

But the latest move from the central bank can be seen as an indication that the recent phase of the rouble rally could be over soon, BCS Brokerage said.

Promsvyazbnk analysts said the MOEX index may climb above 2,400 during the day.

An affordable center-chimney Colonial in Glastonbury, CT, is the oldest property to hit the market this week on Realtor.com®.Offered at a steep … END_OF_DOCUMENT_TOKEN_TO_BE_REPLACED

Nissan was one of the early pioneers of the electric car. The Leaf has now sold over 600,000 units worldwide since its launch in 2011 and is still … END_OF_DOCUMENT_TOKEN_TO_BE_REPLACED

RUDNE, Ukraine — Yurii Brukhal, an electrician by trade, didn’t have a very dangerous role when he volunteered for Ukraine’s territorial defense … END_OF_DOCUMENT_TOKEN_TO_BE_REPLACED