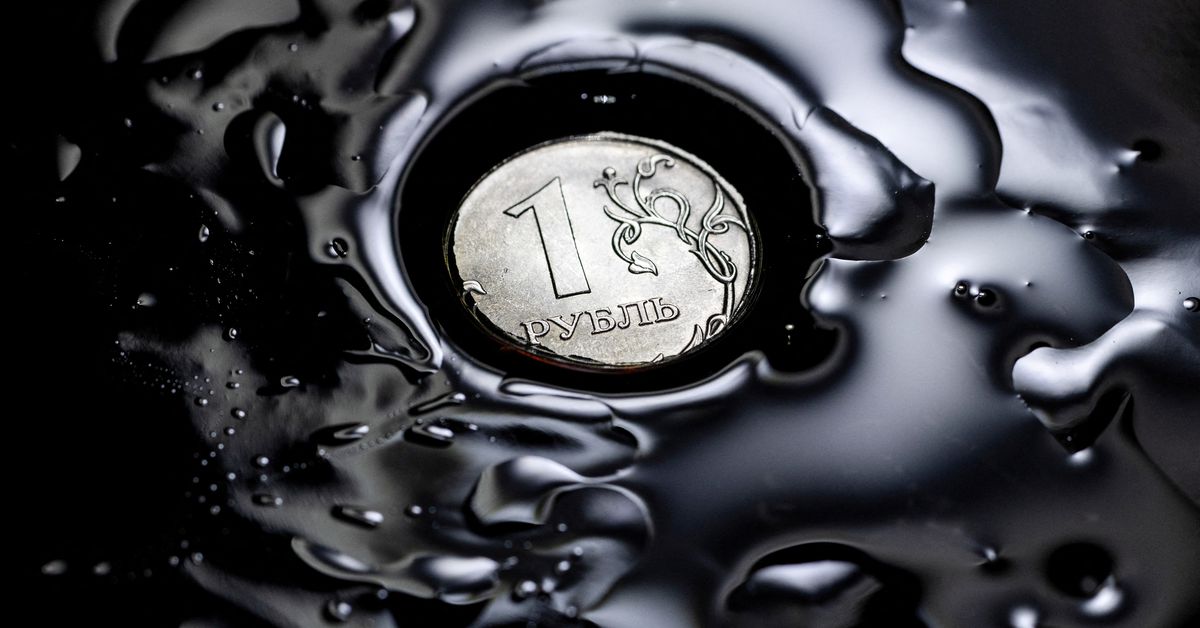 A Russian one rouble coin is seen in this picture illustration taken April 5, 2022. REUTERS/Maxim Shemetov/Illustration/File Photo

April 27 (Reuters) – The rouble soared to a more than two-year high against the euro in Moscow trade on Wednesday, supported by existing capital controls and upcoming income tax payments, after Russia upped the ante in a gas dispute with Europe.

Russia halted gas supplies to Bulgaria and Poland for rejecting its demand for payment in roubles, taking direct aim at European economies in its toughest retaliation so far against international sanctions over Moscow’s actions in Ukraine. read more

The suspension of gas supplies to a number of European countries could exacerbate geopolitical tensions and further worsen relations with Europe, negatively impacting sentiment, Veles Capital said in a note.

However, Promsvyazbank analysts said corporate income taxes due on Thursday could deter the greenback from strengthening significantly against the rouble.

The market is also looking ahead to Friday’s rate decision. The central bank is widely expected to cut its key interest rate by 200 basis points to 15% as it tries to stimulate more lending in the economy in the face of high inflation, a Reuters poll showed.

Lower rates support the economy through cheaper lending but can also fan inflation and make the rouble more vulnerable to external shocks.

Trading activity remains subdued and somewhat erratic compared with levels seen before Feb. 24, when Moscow sent tens of thousands of troops into Ukraine. On the interbank market, the rouble was weaker: banks offered to buy dollars for 74.15 roubles and were selling them for 74.57 .

Movements in the rouble are artificially limited by capital controls imposed by the central bank, and the economy faces soaring inflation, capital flight and the risk of a possible debt default after the West imposed tough sanctions.

President Vladimir Putin said Russia had withstood the impact of sanctions, but an economy ministry document seen by Reuters on Wednesday showed it expects gross domestic product to shrink by 12.4% in its most conservative scenario, suggesting that sanctions pressure is taking its toll. read more

Nasdaq-listed Yandex’s Moscow shares outperformed, jumping around 8.5% on the day after the company reported a strong year-on-year increase in quarterly revenues but flagged an adverse impact of “geopolitical developments” on some operations since Feb. 24. read more

AUSTIN, Texas--(BUSINESS WIRE)--As the first multifamily management company to be recognized in the Public Relations and Marketing Excellence Awards, … END_OF_DOCUMENT_TOKEN_TO_BE_REPLACED

There have been whispers of cooling housing and rental prices in the San Francisco Bay Area, but that hasn't yet translated into practical, noticeable … END_OF_DOCUMENT_TOKEN_TO_BE_REPLACED

Cars pass in Independence Square at twilight in Kyiv, Ukraine, Monday, Oct. 31, 2022. Rolling ... [+] blackouts are increasing across Ukraine as the … END_OF_DOCUMENT_TOKEN_TO_BE_REPLACED