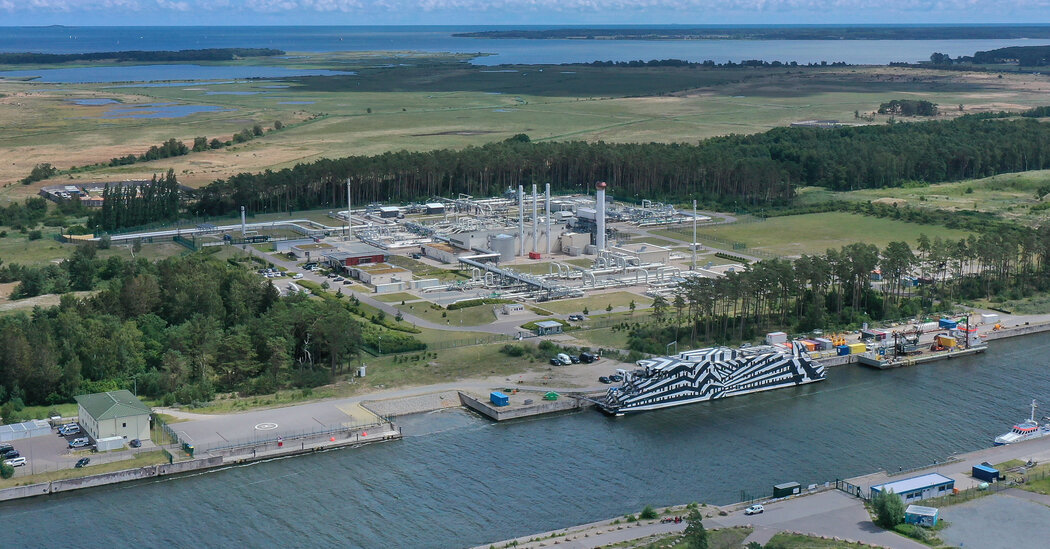 Gazprom said on Friday that it would postpone restarting the flow of natural gas through a closely watched pipeline that connects Russia and Germany, an unexpected delay that appeared to be part of a larger struggle between Moscow and the West over energy and the war in Ukraine.

The Russian-owned energy giant had been expected to resume the flow of gas through the Nord Stream 1 pipeline on Saturday after three days of maintenance. But hours before the pipeline was set to reopen, Gazprom said that problems had been found during inspections, and that the pipeline would be closed until they were eliminated. It did not give a timeline for restarting.

The announcement had the hallmarks of a tit-for-tat move. Earlier on Friday, finance ministers for the Group of 7 countries said that they had agreed to impose a price cap mechanism on Russian oil in a bid to choke off some of the energy revenue Moscow is still collecting from Europe.

Eric Mamer, a spokesman for the European Commission, said that the “fallacious pretenses” for the latest delay were “proof of Russia’s cynicism.”

Russia has, during Mr. Putin’s long tenure, used energy for geopolitical ends, often with the goal of gaining leverage over European policies toward Ukraine. Mr. Putin has taken a keen interest in the oil and natural gas industries, often negotiating deals personally with energy giants in ways that barely hide the political subtext. The Nord Stream pipelines, which are designed to bypass Ukraine by sending gas directly to Germany under the Baltic Sea, have been central to the Kremlin’s political use of energy.

In its statement Friday, Gazprom said it found oil leaks around a turbine used to pressurize the pipeline, forcing it to call off the restart. The German company Siemens Energy, the maker of the turbine, cast doubt on that account. “As the manufacturer of the turbines, we can only state that such a finding is not a technical reason for stopping operation,” the company said late Friday. Siemens also said there were additional turbines available that could be used to keep the pipeline operating.

OPEC Plus group of oil producing countries, headed by Saudi Arabia and Russia, have been hinting that they might pivot away from their gradual post-pandemic production increases and cut output to bolster falling prices. The group is expected to meet on Monday to set oil production levels.

“Putin will endeavor to demonstrate that he has not played his last card and that there are many open windows in his energy war with the West,” Helima Croft, head of commodities at RBC Capital Markets, wrote in a note to clients on Friday.

The latest action by Gazprom will raise fears of a permanent shutdown of the pipeline, which had been the key conduit for gas to Germany, a country heavily dependent on Russian natural gas. Like other European Union nations, Germany has been rushing to fill storage facilities before winter as insurance against Russian cutoffs.

since late July. Well after Russia invaded Ukraine in late February, the pipeline was typically transporting around five times that level.

Britain’s energy regulator said that fuel bills for 24 million households would rise by 80 percent beginning in October, putting pressure on the next prime minister, expected to be Liz Truss, to turn immediate attention to coming up with a massive aid package to head off a catastrophic winter.

Britain’s government is not the only one working to mitigate the energy crisis in Europe. Facing dire circumstances, lawmakers and regulators across the continent are increasingly intervening in the energy markets to protect consumers.

At the same time, the European natural gas market has changed substantially over the last year as Russia crimped supplies and Europe turned to other sources. Flows from Russia to Europe have declined sharply.

imports of liquefied natural gas shipped by sea from the United States and elsewhere, and increased pipeline flows from producers including Norway and Azerbaijan. The problem is that the shifts have forced gas prices higher, as Europe vies with Asia for limited supplies of liquefied gas.

Until Friday’s announcement there was increasing optimism about the prospect for navigating the winter with less Russian gas, leading to the fall in natural gas prices in recent days. Wood Mackenzie, an energy research firm, has projected that Russian pipeline gas imports will steadily decline from supplying more than a third of European demand in recent years to around 9 percent in 2023.

Even the importance of Nord Stream has diminished. Analysts say that Gazprom has so constrained Nord Stream volumes this summer that the pipeline’s performance is no longer crucial to the overall fundamentals of the market. But news about the conduit still has a psychological impact, and some analysts expect gas prices to jump when markets open on Monday.

“A complete shutdown will obviously have implications on market sentiment given how tight the market is,” said Massimo Di Odoardo, vice president for global gas at Wood Mackenzie. Such an event, he added, would “increase the risk of further cuts via other pipelines bringing Russian gas to the E.U. via Ukraine and Turkey.”

Soon after Herschel Walker, the former football star, announced he would run for U.S. Senate in Georgia as a Republican, his son Christian appeared … END_OF_DOCUMENT_TOKEN_TO_BE_REPLACED

SpaceX launched four people to the International Space Station from Florida on Wednesday, as Elon Musk's company keeps up a steady pace of crewed … END_OF_DOCUMENT_TOKEN_TO_BE_REPLACED