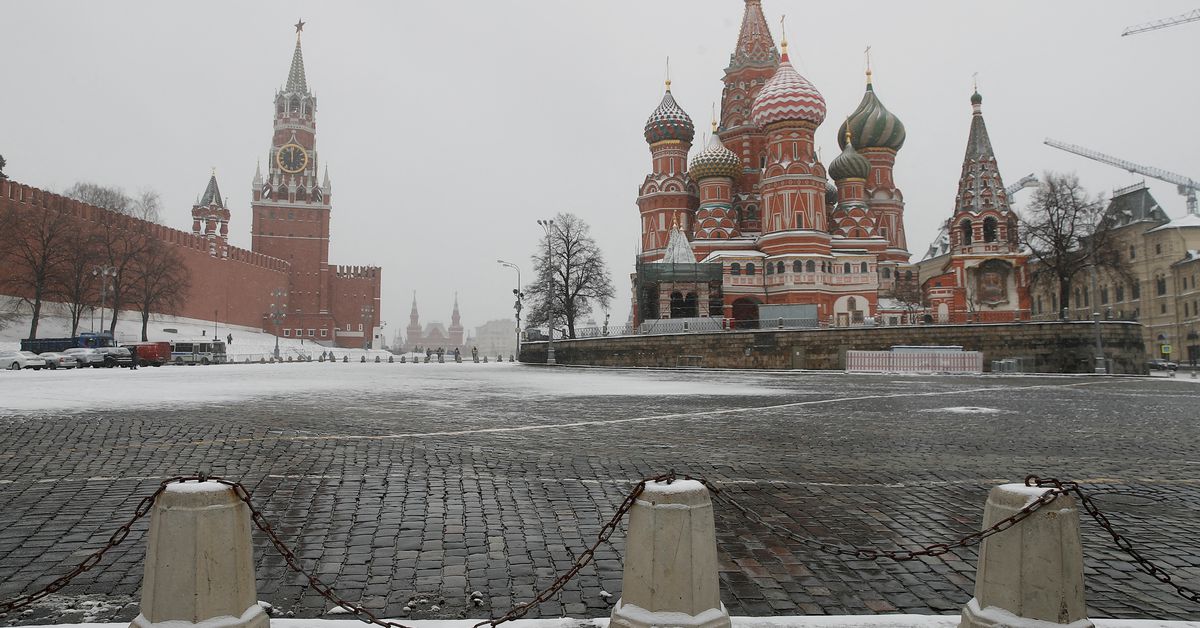 The clock on Spasskaya tower showing the time at noon, is pictured next to Moscow?s Kremlin, and St. Basil?s Cathedral, March 31, 2020. REUTERS/Maxim Shemetov

LONDON, June 27 (Reuters) – Russia looked set for its first sovereign default in decades as some bondholders said they had not received overdue interest on Monday following the expiry of a key payment deadline a day earlier.

Russia has struggled to keep up payments on $40 billion of outstanding bonds since its invasion of Ukraine on Feb. 24, as sweeping sanctions have effectively cut the country off from the global financial system and rendered its assets untouchable to many investors.

The Kremlin has repeatedly said there are no grounds for Russia to default but it is unable to send money to bondholders because of sanctions, accusing the West of trying to drive it into an artificial default.

Russia’s efforts to avoid what would be its first major default on international bonds since the Bolshevik revolution more than a century ago hit a insurmountable roadblock in late May when the U.S. Treasury Department’s Office of Foreign Assets Control (OFAC) effectively blocked Moscow from making payments.

“Since March we thought that a Russian default is probably inevitable, and the question was just when,” Dennis Hranitzky, head of sovereign litigation at law firm Quinn Emanuel, told Reuters. “OFAC has intervened to answer that question for us, and the default is now upon us.”

While a formal default would be largely symbolic given Russia cannot borrow internationally at the moment and doesn’t need to thanks to plentiful oil and gas export revenues, the stigma would probably raise its borrowing costs in future.

The payments in question are $100 million in interest on two bonds, one denominated in U.S. dollars and another in euros , Russia was due to pay on May 27. The payments had a grace period of 30 days, which expired on Sunday.

Russia’s finance ministry said it made the payments to its onshore National Settlement Depository (NSD) in euros and dollars, adding it has fulfilled obligations.

Some Taiwanese holders of the bonds had not received payments on Monday, sources told Reuters. read more

For many bondholders, not receiving the money owed in time into their accounts constitutes a default.

With no exact deadline specified in the prospectus, lawyers say Russia might have until the end of the following business day to pay the bondholders.

Russia’s bonds have been issued with an unusual variety of terms, and an increasing level of ambiguities for those sold more recently, when Moscow was already facing sanctions over its annexation of Crimea in 2014 and a poisoning incident in Britain in 2018.

Rodrigo Olivares-Caminal, chair in banking and finance law at Queen Mary University in London, said clarity was needed on what constituted a discharge for Russia on its obligation, or the difference between receiving and recovering payments.

“All these issues are subject to interpretation by a court of law, but Russia has not waived any of its sovereign immunity and has not submitted to the jurisdiction of any court in any of the two prospectuses,” Olivares-Caminal told Reuters.

In some ways, Russia is in default already.

A committee on derivatives has ruled a “credit event” had occurred on some of its securities, which triggered a payout on some of Russia’s credit default swaps – instruments used by investors to insure exposure to debt against default. This was triggered by Russia failing to make a $1.9 million payment in accrued interest on a payment that had been due in early April. read more

Until the Ukraine invasion, a sovereign default had seemed unthinkable, with Russia being rated investment grade up to shortly before that point. A default would also be unusual as Moscow has the funds to service its debt.

The OFAC had issued a temporary waiver, known as a general licence 9A, in early March to allow Moscow to keep paying investors. It let it expire on May 25 as Washington tightened sanctions on Russia, effectively cutting off payments to U.S. investors and entities.

The lapsed OFAC licence is not the only obstacle Russia faces as in early June the European Union imposed sanctions on the NSD, Russia’s appointed agent for its Eurobonds. read more

Moscow has scrambled in recent days to find ways of dealing with upcoming payments and avoid a default.

President Vladimir Putin signed a decree last Wednesday to launch temporary procedures and give the government 10 days to choose banks to handle payments under a new scheme, suggesting Russia will consider its debt obligations fulfilled when it pays bondholders in roubles.

“Russia saying it’s complying with obligations under the terms of the bond is not the whole story,” Zia Ullah, partner and head of corporate crime and investigations at law firm Eversheds Sutherland told Reuters.

“If you as an investor are not satisfied, for instance, if you know the money is stuck in an escrow account, which effectively would be the practical impact of what Russia is saying, the answer would be, until you discharge the obligation, you have not satisfied the conditions of the bond.”

AUSTIN, Texas--(BUSINESS WIRE)--As the first multifamily management company to be recognized in the Public Relations and Marketing Excellence Awards, … END_OF_DOCUMENT_TOKEN_TO_BE_REPLACED

There have been whispers of cooling housing and rental prices in the San Francisco Bay Area, but that hasn't yet translated into practical, noticeable … END_OF_DOCUMENT_TOKEN_TO_BE_REPLACED

Cars pass in Independence Square at twilight in Kyiv, Ukraine, Monday, Oct. 31, 2022. Rolling ... [+] blackouts are increasing across Ukraine as the … END_OF_DOCUMENT_TOKEN_TO_BE_REPLACED