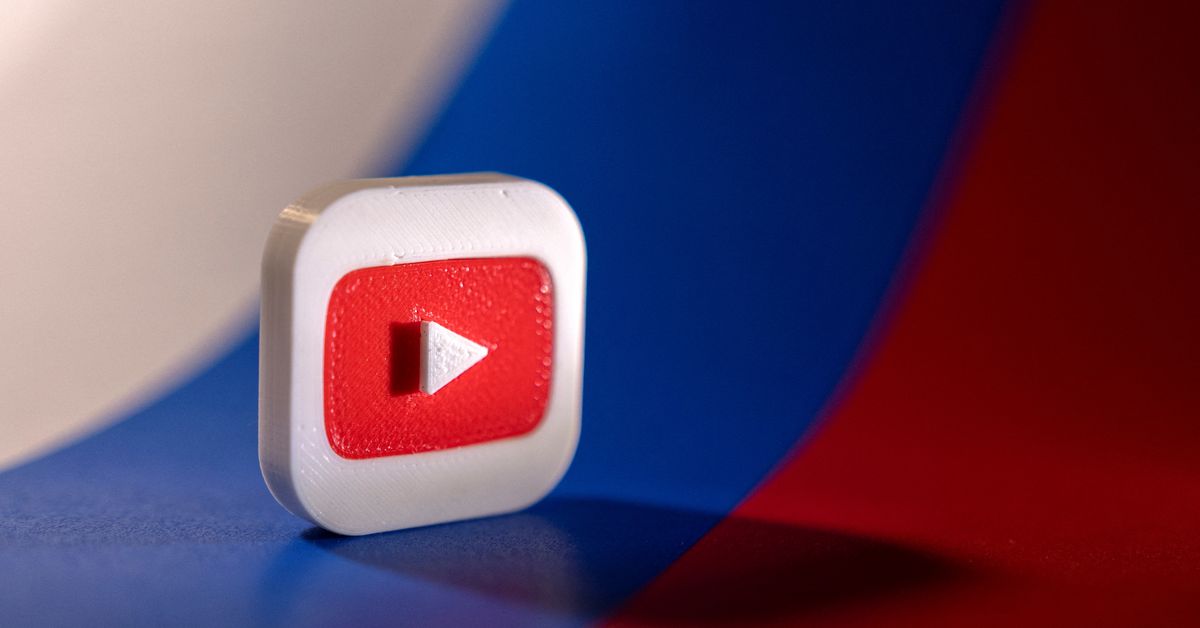 Youtube logo is placed on a Russian flag in this illustration picture taken February 26, 2022. REUTERS/Dado Ruvic/Illustration

March 18 (Reuters) – Russia on Friday demanded that Alphabet Inc’s (GOOGL.O) Google stop spreading what it called threats against Russian citizens on its YouTube video-sharing platform, a move that could presage an outright block of the service on Russian territory.

The regulator, Roskomnadzor, said adverts on the platform were calling for the communications systems of Russia and Belarus’ railway networks to be suspended and that their dissemination was evidence of the U.S. company’s anti-Russian position. It did not say which accounts were publishing the adverts.

“The actions of YouTube’s administration are of a terrorist nature and threaten the life and health of Russian citizens,” the regulator said.

Google removed an advertisement that was flagged by the Russian government, according to a source familiar with the matter who declined to describe it.

The dispute was the latest in a series between Moscow and foreign tech firms over Ukraine.

YouTube, which has blocked Russian state-funded media globally, is under heavy pressure from Russia’s communications regulator and politicians.

Outraged that Meta Platforms (FB.O) was allowing social media users in Ukraine to post messages such as “Death to the Russian invaders”, Moscow blocked Instagram this week, having already stopped access to Facebook because of what it said were restrictions by the platform on Russian media. read more

Russian news media including RIA and Sputnik quoted an unnamed source as saying YouTube could be blocked next week or as early as Friday.

Former Russian President Dmitry Medvedev on Friday wrote a fierce criticism of foreign social media firms, mentioning by name both Meta and YouTube, but he hinted that the door leading to their possible return to the Russian market would be left ajar.

“The ‘guardians’ of free speech have in all seriousness allowed users of their social media to wish death upon the Russian military,” Medvedev, who served as president from 2008 to 2012 and is now deputy secretary of Russia’s Security Council, wrote on the messaging app Telegram.

Medvedev said Russia has the necessary tools and experience to develop its own social media, saying the “one-way game” of Western firms controlling information flows could not continue.

“In order to return, they will have to prove their independence and good attitude to Russia and its citizens,” he wrote. “However, it is not a fact that they will be able to dip their toes in the same water twice.”

VKontakte, Russia’s answer to Facebook, has been breaking records for activity on its platform since Russia sent troops into Ukraine on Feb. 24.

The site attracted 300,000 new users in the two weeks after Russia began what it calls a “special operation” to demilitarise and “de-Nazify” its neighbour.

On the day Instagram was blocked in Russia, VKontakte said its daily domestic audience grew by 8.7% to more than 50 million people, a new record.

Anton Gorelkin, a member of Russia’s State Duma committee on information and communications, pointed Russians to services that would help them move videos from YouTube to the domestic equivalent, RuTube.

“It’s not that I’m calling for everyone to immediately leave YouTube,” he said on his Telegram channel. “But, probably, in light of recent events it is worth following the principle of not keeping all your eggs in one basket.”

He said earlier this week that YouTube may face the same fate as Instagram if it continues “to act as a weapon in the information war”.

Russian tech entrepreneurs said this week they would launch picture-sharing application Rossgram on the domestic market to help fill the void left by Instagram. read more

SEATTLE--(BUSINESS WIRE)--(NASDAQ: RDFN) —The housing market turned a corner in April as the inventory crunch showed signs of easing, according to a … END_OF_DOCUMENT_TOKEN_TO_BE_REPLACED

We present a chance to live like Rocky Mountain royalty right in the heart of Denver. “You don't see a lot of castles in the middle of Denver—and this … END_OF_DOCUMENT_TOKEN_TO_BE_REPLACED