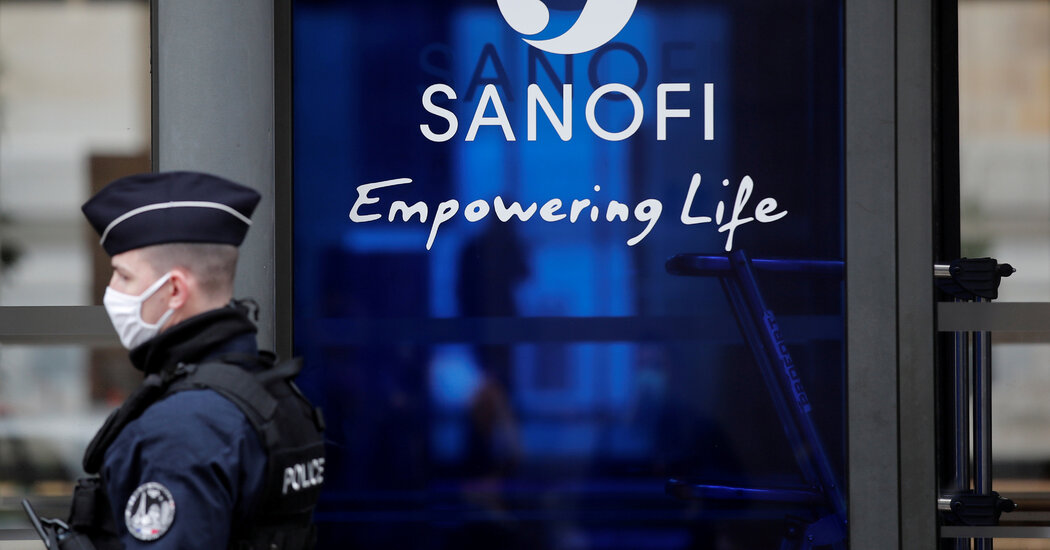 Sanofi, the French pharmaceutical company, said on Monday that it would move the experimental Covid-19 vaccine it is developing with GlaxoSmithKline into a late-stage trial after the shot produced strong immune responses in volunteers in a mid-stage study.

The findings are encouraging news for a vaccine that has fallen behind in development and has so far disappointed those expecting that it would be crucial in combating the pandemic. If the vaccine can become available in the last three months of this year, as its developers hope, it could still play a central role as a booster shot as well as an initial inoculation in the developing world, where the pace of vaccination is lagging.

The vaccine hit a major setback in December, when its developers announced that it did not appear to work well in older adults and that they would have to delay plans to test it in a Phase 3 trial, the crucial test that will assess the vaccine’s effectiveness.

But the companies modified the vaccine and in February began testing it in a Phase 2 study that included more than 700 volunteers in the United States and Honduras between 18 and 95 years old. Sanofi said the vaccine did not raise any safety concerns and produced a strong immune response across age groups, a finding suggesting it has been successfully tweaked.

Sanofi announced the findings in a statement and said it plans to soon publish the results in a medical journal.

Sanofi and GSK are much more experienced in vaccine development than a number of their rivals that have already won authorization. The two companies used a more established approach than those deployed in other, more swiftly developed Covid vaccines. Their shot is based on viral proteins produced with engineered viruses that grow inside insect cells. GSK is supplying the Sanofi vaccine with an adjuvant, an ingredient used in many vaccines meant to boost the immune response.

Sanofi and GSK’s vaccine was one of six selected for funding from Operation Warp Speed, the Trump administration’s effort to accelerate vaccine development. Last summer, the federal government agreed to give the companies $2.1 billion to develop and manufacture the vaccine, in exchange for 100 million doses once the shot was ready.

Sanofi also has supply deals with the European Union and Canada. It has also agreed to supply 200 million doses to Covax, the program to deliver vaccines to middle- and lower-income countries that has been struggling with a shortfall in expected doses. Sanofi has also announced plans to help manufacture the authorized vaccines made by Pfizer-BioNTech, Moderna and Johnson & Johnson.

Sanofi said its Phase 3 trial of its vaccine will begin in the coming weeks and enroll more than 35,000 adult volunteers around the world. It will test two formulations of the vaccine, one aimed at preventing the original strain of the virus and the other aimed at the B.1.351 variant first seen in South Africa that some vaccines appear to be less effective against.

Su-Peing Ng, Sanofi’s global head of medical for vaccines, told journalists on Monday that the company expects it to be “operationally quite challenging” to enroll unvaccinated participants in the Phase 3 trial as vaccination coverage increases in many nations. Still, she said, vaccine doses are still scarce in many parts of the world, pointing to Latin America and Asia as places where the company may look to enroll volunteers.

The company said that soon after starting the Phase 3 trial it plans to assess whether its vaccine can boost immune responses in people who had been vaccinated months before with authorized vaccines. Those booster studies are expected to enroll volunteers in well-vaccinated parts of the world, including the United States and Europe.

Sanofi and GSK said last year they were preparing to be able to make 1 billion doses annually. Thomas Triomphe, Sanofi’s global head of vaccines, said on Monday that the company’s production this year, if its vaccine is shown to work, would depend on the world’s needs.

The vaccine, he said, has “potential to be a booster of choice for many nations and many different platforms.”

AUSTIN, Texas--(BUSINESS WIRE)--As the first multifamily management company to be recognized in the Public Relations and Marketing Excellence Awards, … END_OF_DOCUMENT_TOKEN_TO_BE_REPLACED

There have been whispers of cooling housing and rental prices in the San Francisco Bay Area, but that hasn't yet translated into practical, noticeable … END_OF_DOCUMENT_TOKEN_TO_BE_REPLACED

Cars pass in Independence Square at twilight in Kyiv, Ukraine, Monday, Oct. 31, 2022. Rolling ... [+] blackouts are increasing across Ukraine as the … END_OF_DOCUMENT_TOKEN_TO_BE_REPLACED