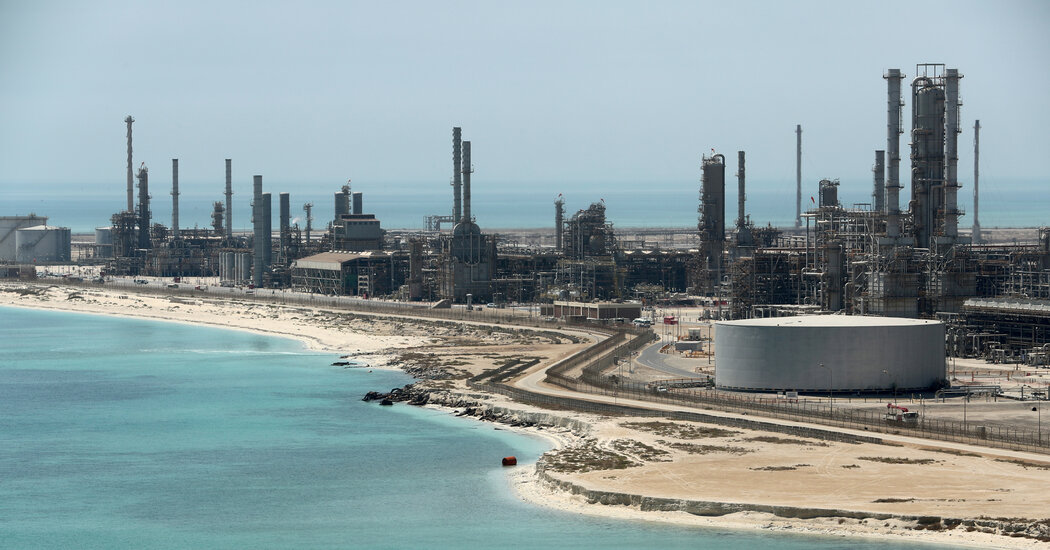 Saudi Aramco, Saudi Arabia’s national oil company, said on Sunday that its net income last year had fallen by 44 percent, to $49 billion, as lower oil prices stemming from the pandemic cut into earnings.

The company’s chief executive, Amin H. Nasser, described 2020 in a statement accompanying the earnings data as “one of the most challenging years in recent history.”

But Aramco, the world’s largest oil producer, said that it would stick by a pledge to pay a $75 billion dividend. Nearly all of the payment will go to the Saudi government, which owns about 98 percent of the company.

The company was listed on the local Tadawul exchange in 2019 in the largest valuation for an initial public offering.

a price war with Russia. The surge led the company to hit a record production levels of 12.1 million barrels a day in April and also contributed to a glut of oil and a sharp fall in global prices.

More recently, Aramco has been throttling back production under an agreement with other members of the Organization of the Petroleum Exporting Countries, as well as Russia and some other producers, a group called OPEC Plus. In January, Saudi Arabia said it would cut an additional 1 million barrels a day below the quota agreed with OPEC Plus, a policy which it is continuing. Average production for 2020 was 9.2 million barrels a day.

The data released on Sunday showed that Aramco is paying out more money in dividends than it is earning from oil activities. Free cash flow, a measure of earnings produced after expenses, was also $49 billion, meaning, in effect, the company was borrowing $26 billion to pay shareholders.

In another reflection of last year’s tumult in the oil markets, the company also cut capital spending by 18 percent compared with 2019, to $27 billion. Aramco said it expected capital expenditures in 2021 to be around $35 billion, less than its previous guidance of $40 billion to $45 billion.

Aramco in recent years has held the prize as the world’s most profitable company. But the impact of the pandemic, which briefly caused some oil futures to fall below zero, plus the appeal of tech products and services while people worked from home, has let Apple surge ahead. Apple’s net income for its fiscal year 2020, which ended Sept. 26, was $57 billion.

The earnings statement on Sunday was limited to a few highlights. Saudi Aramco is expected to provide more details during a call with financial analysts on Monday.

SAN FRANCISCO — Cleve Jones has lived in the Castro neighborhood for nearly 50 years, almost from the day he graduated from high school in Phoenix and … END_OF_DOCUMENT_TOKEN_TO_BE_REPLACED

A home inspection can spare you from unpleasant surprises after you buy. After crunching the numbers, searching your favorite neighborhoods, and … END_OF_DOCUMENT_TOKEN_TO_BE_REPLACED