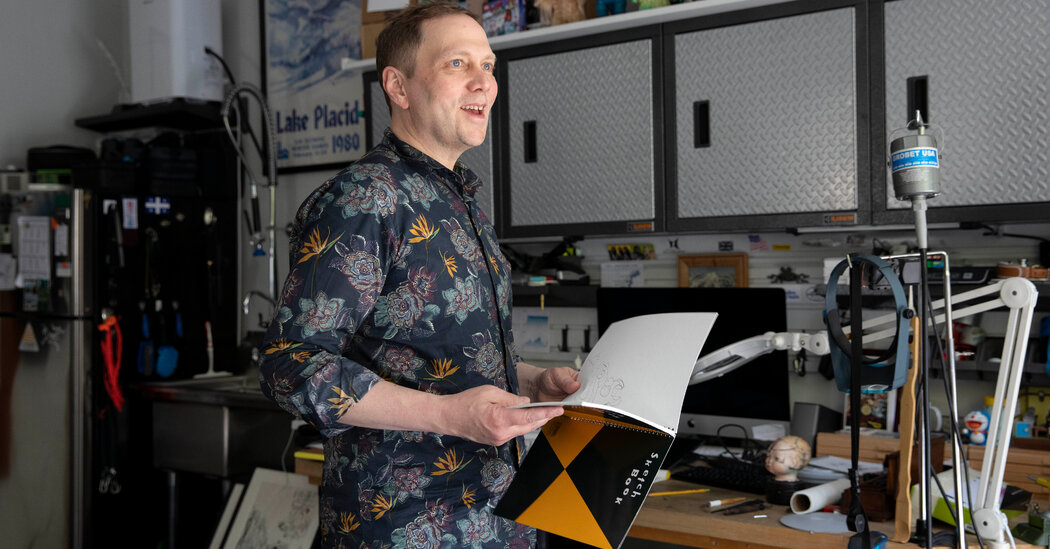 A children’s graphic novel by the creator of the popular “Captain Underpants” series was pulled from circulation last week by its publisher, which said that it “perpetuates passive racism.”

Scholastic said last week that it had halted distribution of the book, “The Adventures of Ook and Gluk: Kung-Fu Cavemen from the Future,” originally published in 2010. The decision was made with “the full support” of its author, Dav Pilkey, the company said, adding that it had removed the book from its website and had stopped fulfilling orders for it.

“Together, we recognize that this book perpetuates passive racism,” the publisher said in a statement. “We are deeply sorry for this serious mistake.”

The graphic novel, which purports to have been written and illustrated by characters from the “Captain Underpants” series, follows Ook and Gluk, who live in the fictional town of Caveland, Ohio, in 500,001 B.C. The characters are pulled through a time portal to the year 2222, where they meet Master Wong, a martial arts instructor who teaches them kung fu.

The New York Times children’s series best-seller list for 240 weeks. In a letter posted on his YouTube channel on Thursday, Mr. Pilkey said he had “intended to showcase diversity, equality and nonviolent conflict resolution” with “The Adventures of Ook and Gluk,” about “a group of friends who save the world using kung fu and the principles found in Chinese philosophy.”

“But this week it was brought to my attention that this book also contains harmful racial stereotypes and passively racist imagery,” Mr. Pilkey wrote. “I wanted to take this opportunity to publicly apologize for this. It was and is wrong and harmful to my Asian readers, friends, and family, and to all Asian people.”

Mr. Pilkey declined to comment through Scholastic. He and his wife, he wrote on YouTube, planned to donate his advance and all of his royalties from the novel’s sales to a variety of organizations, including groups dedicated to stopping violence and hatred against Asians and to promoting diversity in children’s books and publishing.

“I hope that you, my readers, will forgive me, and learn from my mistake that even unintentional and passive stereotypes and racism are harmful to everyone,” he wrote. “I apologize, and I pledge to do better.”

a man opened fire at three massage businesses in and near Atlanta, killing eight people, including six women of Asian descent. In the last year, nearly 3,800 hate incidents were reported against Asian-Americans and Pacific Islanders nationwide, according to Stop AAPI Hate.

Activists and elected officials have said that these attackers were fueled by former President Donald J. Trump’s frequent use of racist language to refer to the coronavirus.

Earlier this month, the estate of Dr. Seuss announced that six of his books would no longer be published because they contained depictions of groups that were “hurtful and wrong.” The decision prompted complaints about “cancel culture” from prominent conservatives.

Scholastic said it was pulling “The Adventures of Ook and Gluk” shortly after Billy Kim, a Korean-American father of two children, ages 5 and 7, started a petition on Change.org demanding an apology from the publisher after he borrowed the book from a library.

“I realized the book relied upon multiple instances of racist imagery and stereotypical tropes,” he wrote in a message accompanying the petition.

He said these included a kung fu master wearing traditional clothing, Asian characters with dashes for eyes, the use of stereotypical Chinese proverbs, and a story line in which the kung fu master is rescued by non-Asian protagonists using skills he taught them.

“How is it in the last 10 years nobody said anything about it?” Mr. Kim, of Manhasset, N.Y., said in an interview.

Mr. Kim said he contacted Scholastic and spoke with a senior executive there, and he later spoke with Mr. Pilkey by videoconference for about 40 minutes. Mr. Pilkey, he said, apologized to him and his older son.

While Mr. Kim was glad the book was being pulled, he wrote that “the damage has been done.”

“Every child who has read this book has been conditioned to accept this racist imagery as ‘OK’ or even funny,” he wrote.

Cristina Rhodes, an English professor at Shippensburg University in Pennsylvania, said that Scholastic should have been aware of the racially insensitive imagery in the book a decade ago.

Stereotypical images and tropes can give young readers a distorted view of certain groups, Professor Rhodes said — as with Asians in this case. “Children see themselves reflected in books,” she said.

Lara Saguisag, an English professor specializing in children’s and young adult literature at the College of Staten Island, said she was surprised to see these images from Mr. Pilkey, who she said had energized children and appealed to “reluctant readers” by teaching them to love books and reading.

“I think it’s part of the alarm about these books because it’s been going under the radar,” she said.

Professor Saguisag said she hoped that Scholastic and other publishers would evaluate other books for racially insensitive imagery.

“As long as profit is at the center, I feel like these such acts of pulling books from bookshelves will be the exception rather than the rule,” she added. “I hope I’m proven wrong.”

You were seeing double this week: A spectacular $54 million compound featuring two equally luxurious mansions separated by a private lake in Southwest … END_OF_DOCUMENT_TOKEN_TO_BE_REPLACED