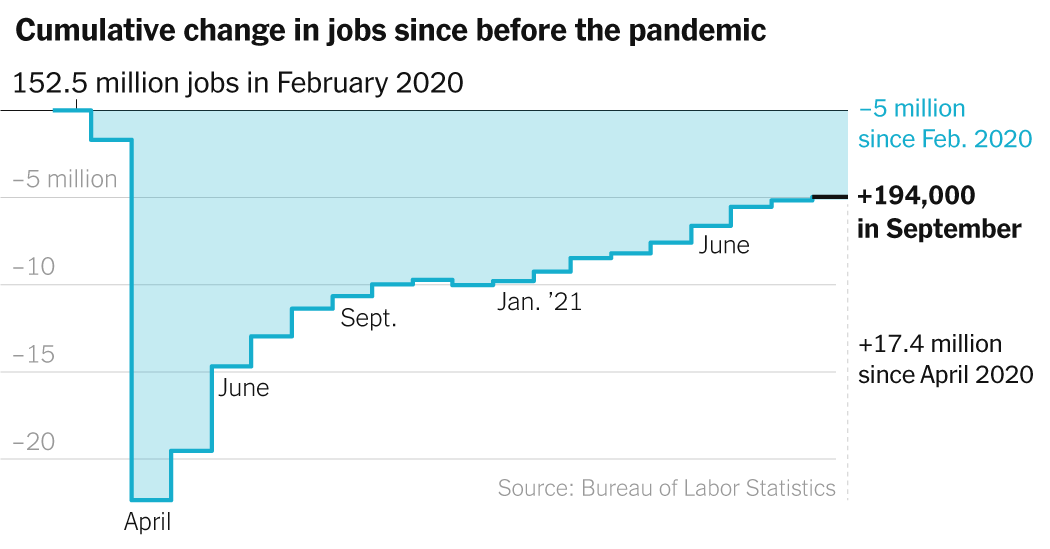 Job growth slowed to the year’s weakest pace last month as the latest coronavirus wave dashed hopes of an imminent return to normal for the U.S. economy.

Employers added just 194,000 jobs in September, the Labor Department said Friday, down from 366,000 in August — and far below the increase of more than one million in July, before the highly contagious Delta variant led to a spike in coronavirus cases across much of the country. Leisure and hospitality businesses, a main driver of job growth earlier this year, added fewer than 100,000 jobs for the second straight month.

“Employment is slowing when it should be picking up because we’re still on the course set by the virus,” said Diane Swonk, chief economist for the accounting firm Grant Thornton.

for the Federal Reserve, which is weighing when to begin pulling back support for the economy.

It is possible that the recent slowdown is a Delta-driven blip and will soon fade — or, indeed, may already be largely in the past. The data released on Friday was collected in mid-September, when the Delta wave was near its peak. Since then, cases and hospitalizations have fallen in much of the country, and more timely data from private-sector sources suggests that economic activity has begun to rebound. If those trends continue, people on the sidelines could return to the labor force, and hiring should begin to pick up.

“This report is a glance in the rearview mirror,” said Daniel Zhao, an economist at the career site Glassdoor. “There should be some optimism that there should be a reacceleration in October.”

But it is also possible that the damage done by the pandemic will take longer to heal than economists had hoped. Supply-chain disruptions have been unexpectedly persistent, and shifts in consumer behavior during the pandemic may not soon reverse. In surveys, many workers say they are reconsidering their priorities and do not want to return to their old ways of working.

Expanded unemployment benefits, which many businesses blamed for discouraging people from looking for work, ended nationwide early last month. Schools reopened in person in much of the country, which should have made it easier for parents to return to work. Rising vaccination rates were meant to make reluctant workers feel safe enough to resume their job searches. As recently as August, many economists circled September as the month when workers would flood back into the job market.

Instead, the labor force shrank by nearly 200,000 people. The pandemic’s resurgence delayed office reopenings, disrupted the start of the school year and made some people reluctant to accept jobs requiring face-to-face interaction. At the same time, preliminary evidence suggests that the cutoff in unemployment benefits has done little to push people back to work.

“I am a little bit puzzled, to be honest,” said Aneta Markowska, chief financial economist for the investment bank Jefferies. “We all waited for September for this big flurry of hiring on the premise that unemployment benefits and school reopening would bring people back to the labor force. And it just doesn’t seem like we’re seeing that.”

Ms. Markowska said more people might begin to look for work as the Delta variant eased and as they depleted savings accumulated earlier in the pandemic. But some people have retired early or have found other ways to make ends meet and may be slow to return to the labor force, if they come back at all.

In the meantime, people available to work are enjoying a rare moment of leverage. Average earnings rose 19 cents an hour in September and are up more than $1 an hour over the last year, after a series of strong monthly gains. Pay has risen even faster in some low-wage sectors.

Many businesses are finding that higher wages alone aren’t enough to attract workers, said Becky Frankiewicz, president of the Manpower Group, a staffing firm. After years of expecting employees to work whenever they were needed — often with no set schedule and little notice — companies are finding that workers are now setting the terms.

“They get to choose when, where and in what duration they’re working,” Ms. Frankiewicz said. “That is a role reversal. That is a structural change in the workers’ economy.”

Arizmendi Bakery, a cooperative in San Rafael, Calif., recently raised its wages by $3 an hour, by far the biggest increase in its history. But it is still struggling to attract applicants heading into the crucial holiday season.

The bakery has managed to hire a few people, including one who began this week. But other workers have given their notice to leave. The bakery, which has been operating on reduced hours since the pandemic began, now has enough business to return to its original hours, but cannot find enough labor to do so.

Target has added new brands to its beauty department. At a growing number of stores, it also has mini Ulta Beauty shops with prestige brands.Melissa … END_OF_DOCUMENT_TOKEN_TO_BE_REPLACED

Just a few months ago, builders couldn't put homes up fast enough to appease the hordes of eager buyers. They boasted about lengthy waitlists, even … END_OF_DOCUMENT_TOKEN_TO_BE_REPLACED