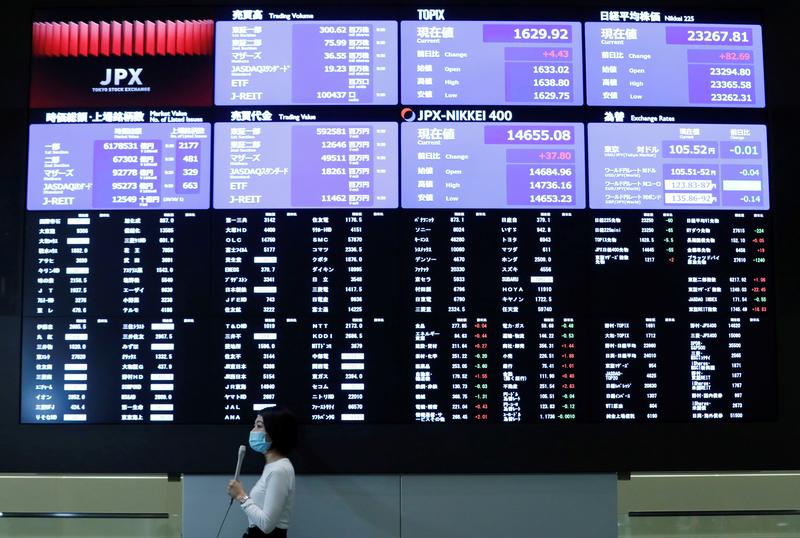 SYDNEY (Reuters) – Asian shares rallied on Monday while the dollar held near three-month peaks after the U.S. Senate passage of a $1.9 trillion stimulus bill augured well for a global economic rebound, though it also put fresh pressure on Treasuries.

There was also upbeat news in Asia, as China’s exports surged 155% in February compared with a year earlier when much of the economy shut down to fight the coronavirus.

“Including the current proposed stimulus package and further upside from a second-half infrastructure bill, total U.S. fiscal support is six times greater than the EU recovery fund,” he said. “The Fed is also supportive with U.S. money supply growing two times faster than the Eurozone.”

U.S. Treasury Secretary Janet Yellen tried to counter inflation concerns by noting the true unemployment rate was nearer 10% and there was still plenty of slack in the labour market.

Yet yields on U.S. 10-year Treasuries still hit a one-year high of 1.625% in the wake of the data, and stood at 1.59% on Monday. Yields increased a hefty 16 basis points for the week, while German yields actually dipped 4 basis points.

The European Central Bank meets on Thursday amid talk it will protest the recent rise in euro zone yields and perhaps mull ways to restrain further increases.

The diverging trajectory on yields boosted the dollar on the euro, which fell away to a three-month low of $1.1892, and was last pinned at $1.1926.

Ned Rumpeltin, European head of FX strategy at TD Securities, said the break of chart support at $1.1950 was a bearish development which targeted $1.1800.

“The solid U.S. employment report could be the final missing piece of the stronger USD narrative,” he added. “This should put the dollar in a much stronger position relative to other major currencies.”

The dollar index duly shot up to levels not seen since late November and was last at 91.897, well above its recent trough of 89.677.

The jump in yields has weighed on gold, which offers no fixed return, and left it at $1,713 an ounce and just above a nine-month low.

Oil prices were up the highest levels in more than a year after Yemen’s Houthi forces fired drones and missiles at the heart of Saudi Arabia’s oil industry on Sunday, raising concerns about production.

Prices had already been supported by a decision by OPEC and its allies not to increase supply in April. [O/R]

HONG KONG — Jimmy Lai, a pro-democracy media figure, and several of Hong Kong’s most prominent opposition campaigners were sentenced on Friday to … END_OF_DOCUMENT_TOKEN_TO_BE_REPLACED

Scientists have long said that giving people a single course of a Covid-19 vaccine might not be sufficient in the long term, and that booster shots … END_OF_DOCUMENT_TOKEN_TO_BE_REPLACED

If 2020 was the summer of the pandemic-enforced road trip, many people seem to be hoping that 2021 will be the summer they can travel overseas. But … END_OF_DOCUMENT_TOKEN_TO_BE_REPLACED