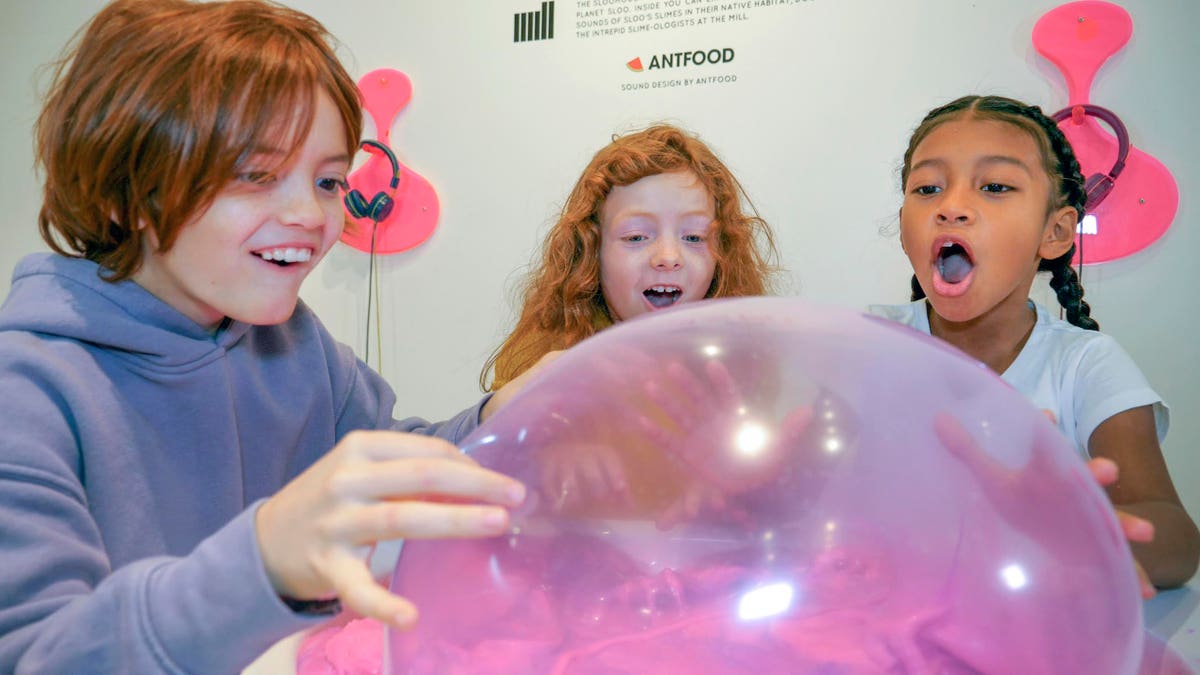 Manhattan’s Sloomoo Institute, a sensory-filled slime playground for children and adults, is growing exponentially with a 20,000-square-foot space at 820 N. Orleans Street in Chicago, and a 28,000-square foot unit in Buckhead, Ga., at 3637 Peachtree Road, NE, both opening in the summer. In the fourth quarter of next year, Sloomoo will make its way to downtown Denver, followed by Houston.

A cornucopia for the senses, Sloomoo Institute is a visual, tactile and olfactory world of discovery where slime comes in myriad textures, colors and fragrances.

The Chicago and Buckhead locations will offer new experiences and features, given their size. Sloomoo in Manhattan consists of 8,000 square feet of ground floor exhibition space and 4,000 square feet on the lower level, which is called the kitchen. It’s where compounds are mixed into slime – it’s where the magic really happens – but it’s not open to the public. “We’re bringing the kitchen into the experience so people can see it and tour it,” said cofounder Karen Robinovitz.

“We work with a data science team that’s driving a lot of our location search and is homing in on areas where ticketed moments are thriving and where there are large numbers of families,” Robinovitz said.

“We’ll be creating new moments in Chicago and Atlanta,” Robinovitz added. “It’s not just slime. We’ll have our kinetic sandbox, filled with kinetic sand, which has a sensory-satisfying feeling and texture. It can be compacted like a solid, and then you see it slowly crumble. It’s soft, moldable and shapable.

‘We’ll have digital elements and other compounds. We’re working on compounds that aren’t slime, but are just as sensory. We’re still naming some of them.”

Take for example, a compound Robinovitz described like this: “It’s as if you were holding a cloud and you stretched it, and it would snap back. It’s all science, STEM, and sensory.

“We’re creating in the new spaces Smell Phones, areas before you get to the DIY bar where you choose your slime texture and mix it with color and scent,” she said. “There will be a forest of smell phones, 3-D structures growing out of the wall where you can smell 60 different flavors such as cotton candy or dragonfruit, before you add it to your slime.”

Some of the fragrances are supplied by Demeter, the Pennsylvania-based perfume house that created a scent that smells like kitten fur. With 300 toppings and endless trinkets to stretch the imagination, guests can put their imprimatur on custom slimes.

The Chicago Sloomoo will have elements of augmented reality, and is developing installations around intelligent slime mold, which is a brainless organism, but has the intelligence to map through mazes.

“You learn while you’re playing,” Robinovitz said. “Adults need to get out of their heads. It’s about the larger mission of sensory playing and escaping all the stress of the work world.”

To raise funds for the expansion, Sloomoo brought on an investor, Nicole Shanahan, who invested $2.5 million and took a seat on the advisory board. “As an angel investor, it’s one of my larger check sizes,” said Shanahan.

A lawyer who founded and leads ClearAccessIP, a patent-valuation and management company, Shanahan in September 2019 said that she’ll give $100 million to programs that help women become pregnant later in life, overhaul the criminal-justice system, and find solutions for mitigating climate change. Shanahan in 2018 married Google co-founder Sergey Brin.

“Parents are looking at how to get their children off screens,” said Shanahan, who is a producer of the first ticketed experience at Cannes, ‘Evolver: The Prologue.’ ‘’As an investor I’ve looked at some of the ticketed experiences. We realized they were going to grow. Sloomoo occupies their senses and their hands so they can’t actually use their phones.

“I was taken by how the kids responded,” she said. “There’s something really quite unique to what Sloomoo has accomplished.”

The Institute continues to collaborate with artists and other creators.

Last year, Sloomoo partnered with artist Jon Burgerman for Happy Pizza, a limited edition slime for $24.99, which featured a polka dotted butter slime, where the red dots represented tomatoes or pepperoni, the yellow mimicked cheese and the bottom layer was the crust. Burgerman, who worked with the Brooklyn Museum and Nike   , hand-painted the Happy Pizza slime lids with googly eyes.

Sloomoo, which survived the pandemic, which began four months after the institute opened, saw traffic in July and August return to pre-pandemic levels of 1,500 people a day visiting on Saturdays and Sundays. After a small dip in September with back-to-school, the location is seeing an increase again.

“I’m really excited for global expansion,” Robinovitz said, “in particular markets in Asia and the Middle East. People will really flock to Sloomoo because it’s an art exhibit and experiential fun and a playful environment. I really think Dubai would be a fantastic market, as would Singapore and South Korea.

“We’re living in a world with a lot of dissent and confusion and negativity,” Robinovitz added. “When you come together and play, and you’re all equal.”

These first months of the year are traditionally when hopeful homebuyers sit down to tally their raises or bonuses and assess what they can afford. … END_OF_DOCUMENT_TOKEN_TO_BE_REPLACED