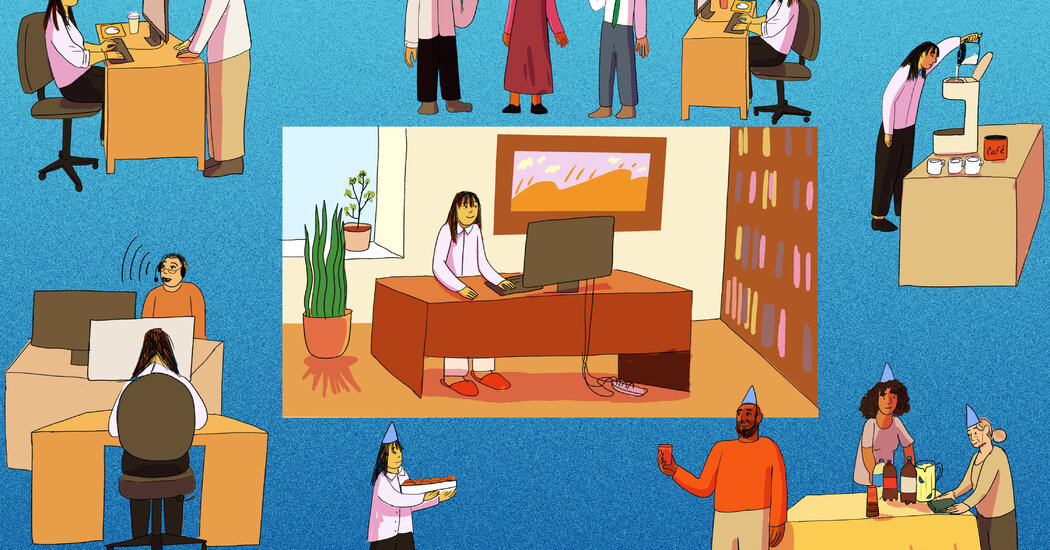 As managers try to draw people back to the office, they’re wrestling with how to rebuild a sense of community without taking away the focus that often came with remote work. Meanwhile, some workers are getting nostalgic for the silence they had at home, especially because many of the office changes aimed at bringing people back often make it harder to concentrate. (One company, for example, added a rock climbing wall.)

Research tends to back up the squishy sense that people get more done outside the office. A study from Stanford of a 16,000-person travel agency found that call center employees working remotely were 13 percent more productive than their in-person colleagues. Another study of 1,600 professionals found that they wrote 8 percent more code working a hybrid schedule compared with being fully in the office.

“We freed people of group think, we freed them of some exclusion and disrespect, we freed them of micromanaging, deafening and distracting noise,” said Adam Grant, an organizational psychologist at the University of Pennsylvania’s Wharton School. “We have literally a mountain of evidence that if you let individuals generate ideas alone, you not only get more ideas, you get better ideas.”

But many executives feel strongly about the benefits of the office: the opportunities to find mentors, build relationships and brainstorm. Some workers also struggle to be productive at home, especially those with care-taking responsibilities. So companies are going to extremes to bring quiet into the office.

Azeema Batchelor, who works at the law firm Wiley Rein in Washington, D.C., has become reliant on her office’s red light, green light system. A rod the width of a sharpie sticks out of her monitor with a dome on it. When she needs to focus, she turns the dome red. When on a call, she switches it to yellow. When she is open to people strolling through her office to chat, a green light beckons them in.

Ms. Batchelor’s office introduced the colored lighting system earlier this year, as employees started coming in two or three days a week. The aim is to help them find that balance between productivity and the actually desired stop-and-chat. Just the other day, for example, Ms. Batchelor’s boss came by her office to discuss a training they were planning. The green light was on.

Soon after Herschel Walker, the former football star, announced he would run for U.S. Senate in Georgia as a Republican, his son Christian appeared … END_OF_DOCUMENT_TOKEN_TO_BE_REPLACED

SpaceX launched four people to the International Space Station from Florida on Wednesday, as Elon Musk's company keeps up a steady pace of crewed … END_OF_DOCUMENT_TOKEN_TO_BE_REPLACED