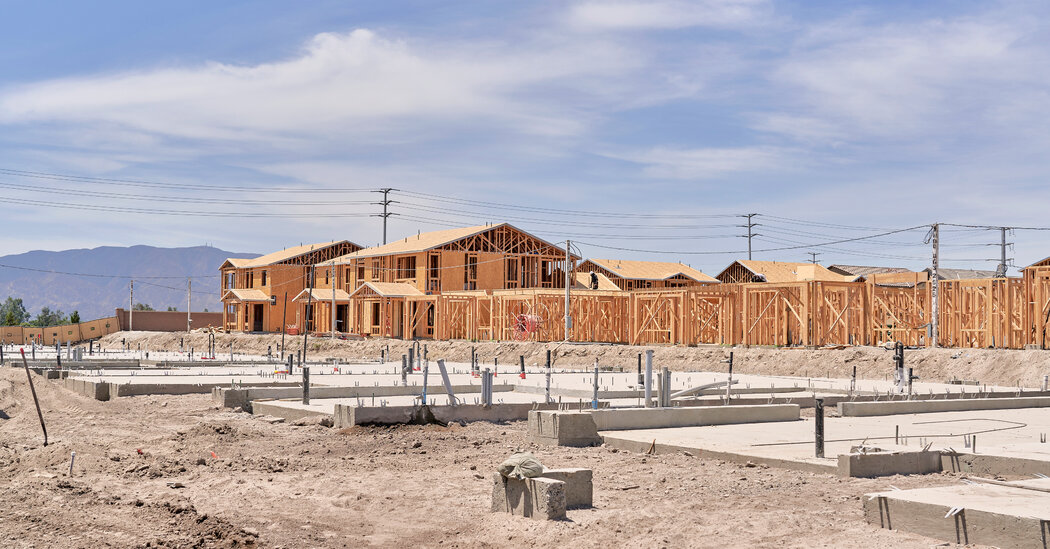 Last year, Freddie Mac estimated the nation’s housing supply deficit at 3.8 million units, up from 2.5 million in 2018. Other analysts come up with different figures, but pretty much everyone agrees that the country hasn’t been building nearly enough homes to keep up with demand, especially for middle and lower-income families. The failure to build those units is the single biggest contributor to the affordability crisis that in recent years has spread from a few coastal cities to a much larger swath of the country.

Sam Khater, Freddie Mac’s chief economist, said there was an irony to what’s happening right now: The Federal Reserve is trying to snuff out inflation by increasing interest rates, which is leading to a pullback in construction, which will make housing even less affordable down the road. In a sense, policymakers are solving the immediate cost-of-living crisis (inflation) by making the longer-run cost-of-living crisis (housing) even worse.

The housing market has responded so quickly to the Fed’s actions because it is built on debt, making it ultrasensitive to interest rates. Builders borrow money to build new homes, then sell them to buyers who, for the most part, borrow 80 percent or more of the home’s cost. When banks pull back on credit by raising monthly borrowing costs, it causes buyers and builders to retreat for different versions of the same reason, which is the fear they will be left with property they can no longer afford and might be worth less than they paid for it to boot.

The slowdown in homebuilding wouldn’t have such a significant effect on the nation’s overall housing supply if builders could quickly adjust to demand, making up for the recessionary shortages during boom times. But they can’t: Housing is a hugely fragmented industry of mostly independent companies that includes developers that spend decades turning raw land into parcels that can be built upon and subcontractors that hire laborers by the hour. The system works fine when demand is strong, but deteriorates with even a modest sign of trouble and can take years to restart, creating a backlog that gets deeper each time building slows.

The collapse of the housing market during the Great Recession put many smaller home builders out of business, and left the ones that survived extremely cautious. Housing starts cratered to 554,000 in 2009 from 2.1 million in 2005, then barely recovered, even as demand steadily grew. Only in the past couple years did developers finally start building at something close to their pre-bubble pace — only to slam on the brakes now that rates are rising.

MIAMI--(BUSINESS WIRE)--Intelli Smart Homes, the leading smart home technology company, has been recognized as one of America’s fastest-growing … END_OF_DOCUMENT_TOKEN_TO_BE_REPLACED

Customers outside a Walmart store in Torrance, California, US, on Sunday, May 15, 2022. Walmart Inc. is scheduled to release earnings figures on May … END_OF_DOCUMENT_TOKEN_TO_BE_REPLACED

The past few years have been brutal on homebuyers' budgets. Would-be buyers have been priced out of some of the most desirable neighborhoods thanks to … END_OF_DOCUMENT_TOKEN_TO_BE_REPLACED