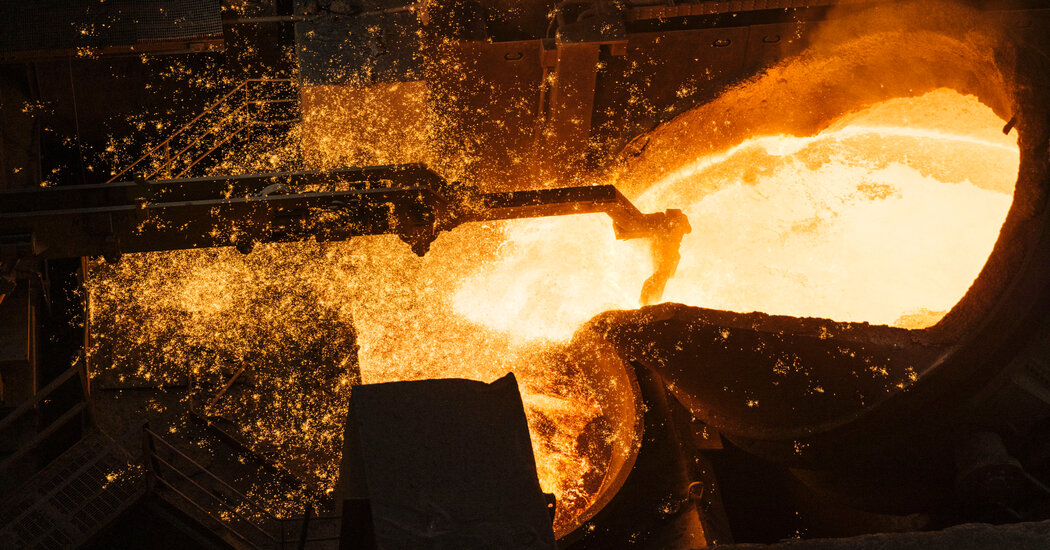 For decades, the story of American steel had been one of job losses, mill closures and the bruising effects of foreign competition. But now, the industry is experiencing a comeback that few would have predicted even months ago.

Steel prices are at record highs and demand is surging, as businesses step up production amid an easing of pandemic restrictions. Steel makers have consolidated in the past year, allowing them to exert more control over supply. Tariffs on foreign steel imposed by the Trump administration have kept cheaper imports out. And steel companies are hiring again.

Evidence of the boom can even be found on Wall Street: Nucor, the country’s biggest steel producer, is this year’s top performing stock in the S&P 500, and shares of steel makers are generating some of the best returns in the index.

“We are running 24/7 everywhere,” said Lourenco Goncalves, the chief executive of Cleveland-Cliffs, an Ohio-based steel producer that reported a significant surge in sales during its latest quarter. “Shifts that were not being used, we are using,” Mr. Goncalves said in an interview. “That’s why we’re hiring.”

has fallen more than 75 percent. More than 400,000 jobs disappeared as foreign competition grew and as the industry shifted toward production processes that required fewer workers. But the price surge is delivering some optimism to steel towns across the country, especially after job losses during the pandemic pushed American steel employment to the lowest level on record.

“Last year we were laying off,” said Pete Trinidad, president of the United Steelworkers Local 6787 union, which represents roughly 3,300 workers at a Cleveland-Cliffs steel mill in Burns Harbor, Ind. “Everybody was offered jobs back. And we’re hiring now. So, yes, it’s a 180-degree turn.”

broader tariffs on imported steel in 2018. Steel imports have collapsed by roughly a quarter, compared with 2017 levels, according to Goldman Sachs, opening up an opportunity for domestic producers, who are capturing prices as much as $600 per ton above those prevailing on the global markets.

Those tariffs have been eased somewhat by one-off agreements with trade partners like Mexico and Canada, and by exemptions granted to companies. But the tariffs are in place and continue to be applied to imports from key competitors in the European Union and China.

steel and aluminum imports that had played a major role in the Trump administration’s trade wars.

It is unclear whether the talks will lead to any significant breakthroughs. They could, however, make for difficult politics for the White House. On Wednesday, a coalition of steel industry groups including steel manufacturing trade groups and the United Steelworkers union — whose leadership endorsed President Biden in the 2020 election — called on the Biden administration to ensure that tariffs remain in place.

“Eliminating the steel tariffs now would undermine the viability of our industry,” they wrote in a letter addressed to the president.

Adam Hodge, a spokesman for the Office of the United States Trade Representative, which announced the trade talks, said the discussions were focused on “effective solutions that address global steel and aluminum overcapacity by China and other countries while ensuring the long-term viability of our steel and aluminum industries.”

Although producers are rejoicing, the price increases are painful for consumers of steel.

At its Plymouth, Mich., plant, Clips & Clamps Industries employs roughly 50 workers who stamp and form steel into components for cars such as the metal props that are used to keep the hood open when checking the oil.

“Last month, I can tell you, we lost money,” said Jeffrey Aznavorian, the manufacturer’s president. He attributed the loss, in part, to higher prices the company had to pay for steel. Mr. Aznavorian said he worried that his company would lose ground to foreign auto parts suppliers in Mexico and Canada who can buy cheaper steel and offer lower prices.

And it does not look like things are going to get easier for steel buyers any time soon. Wall Street analysts recently lifted forecasts for U.S. steel prices, citing the combination of industry consolidation and the durability, at least so far, of Trump-era tariffs under Mr. Biden. The two have helped create what analysts from Citibank called “the best backdrop for steel in a decade.”

Leon Topalian, the chief executive of Nucor, said the economy was showing an ability to absorb high steel prices, which reflect the high-demand nature of the recovery from the pandemic. “When Nucor is doing well, our customer segment is doing well,” Mr. Topalian said, “which means their customers are doing well.”

For their part, steel workers are enjoying a respite after being hit hard by the pandemic.

The city of Middletown in southwestern Ohio was spared the worst of the downturn, which saw 7,000 iron and steel production jobs disappear nationwide. Middletown Works — a sprawling Cleveland-Cliffs steel plant and one of the area’s most important employers — managed to avoid layoffs. But as demand has surged, activity and hours at the plant are picking up.

“We’re definitely running good,” said Neil Douglas, president of the International Association of Machinists and Aerospace Workers Local Lodge 1943, which represents more than 1,800 workers at Middletown Works. The plant, Mr. Douglas said, is having trouble finding the additional workers to hire for positions that could earn as much as $85,000 a year.

And the buzz at the plant is spilling over into the town. Mr. Douglas says he can’t walk into the home improvement center without running into someone from the mill who is embarking on a new project at home.

“You can definitely feel in the town that people are using their disposable income,” he said. “When we’re running good and we’re making money, people are going to spend it in town for sure.”

“The government can place them under watch and pressure them through their employers or relatives not to make trouble,” said Minxin Pei, a professor … END_OF_DOCUMENT_TOKEN_TO_BE_REPLACED