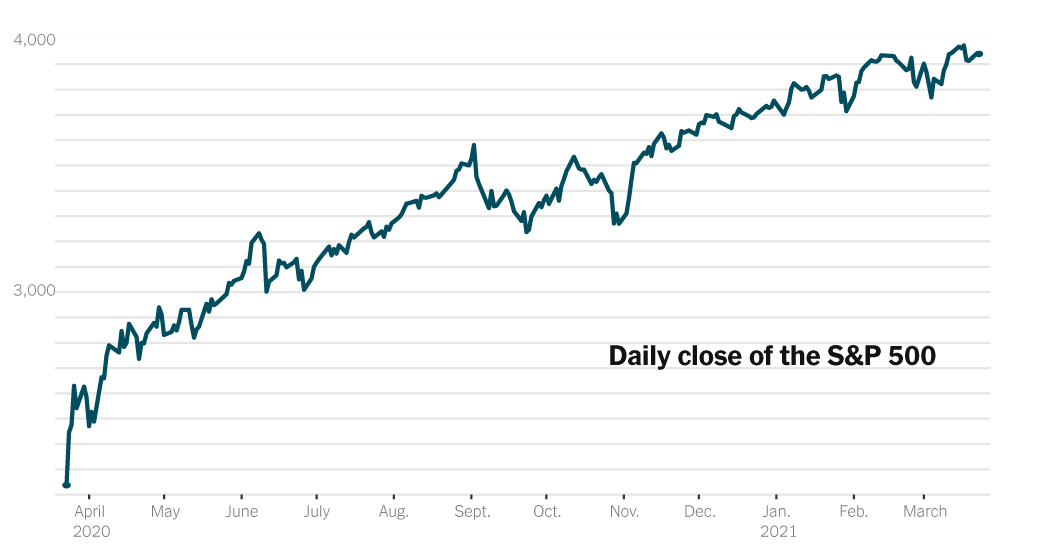 The bull market turned a year old on Tuesday, a testament to the unbridled enthusiasm that let investors shrug off the economic carnage of the pandemic and buy stocks — and pretty much anything else.

Since the S&P 500 scraped bottom on March 23 last year, the blue-chip index has posted a rally of nearly 75 percent, even with a 0.8 percent fall on Tuesday. Tesla’s stock is up more than 650 percent, while true believers have pushed up shares of GameStop by over 4,500 percent. Bitcoin is booming, and so are even more esoteric assets like NFTs.

It’s enough to pose a question that would have seemed unfathomable a year ago.

“Is this a bubble?” said Garry Evans, chief strategist for global asset allocation at BCA Research. “I would say there are certainly pockets of the market that look bubbly.”

Mr. Evans said he didn’t see “a generalized bubble” but believed that individual stocks — like GameStop, which was driven up in January by retail traders gathering on sites like Reddit — and cryptocurrencies were overvalued.

an increase in stock-buying by average investors. From the most recent round of stimulus alone, Deutsche Bank recently estimated, some $170 billion could flow into the stock market.

Nikolaos Panigirtzoglou, a market strategist with J.P. Morgan in London, said the wave of investment activity sweeping the country was a glaring reason to worry that the rally could falter.

U.S. households are now more heavily invested in stock than ever before, even during the peak of the dot-com bubble, he said. “If that goes away or reverses, then the equity market will have a problem,” he said.

And on Monday, even a Goldman Sachs research note titled “Bubble Puzzle: A Guide to Bubbles and Why We Are Not in One” acknowledged that some indicators of retail trading activity were “worrying.” It mentioned the surging levels of daily trading in stocks and increased buying of tiny amounts of stock options by individuals.

The conditions for a bubble are clearly present, said John D. Turner, a professor of financial history at Queen’s University Belfast. Mr. Turner recently co-wrote — along with his colleague William Quinn — a book titled “Boom and Bust: A Global History of Financial Bubbles.”

To make them, he said, you need three key ingredients, plus a spark. The ingredients are ease of trading, access to credit, and mass speculation — all of which are in ready supply right now.

The spark, he said, is the unknown factor. It could be a change in government policy, like the push to supercharge homeownership in the 1990s and 2000s. Or a major technological development, the way electrification contributed to a boom in the 1920s.

So the conditions, Mr. Turner said, are all here.

Chief Covelli said Mr. Crimo planned the shooting for several weeks, but that the authorities had not yet established what his motive was. “We have no … END_OF_DOCUMENT_TOKEN_TO_BE_REPLACED

Kevin McKenzie and Martine van Hamel were standing in the dining room of their weekend house in Woodstock, N.Y., trying to figure out when they got … END_OF_DOCUMENT_TOKEN_TO_BE_REPLACED