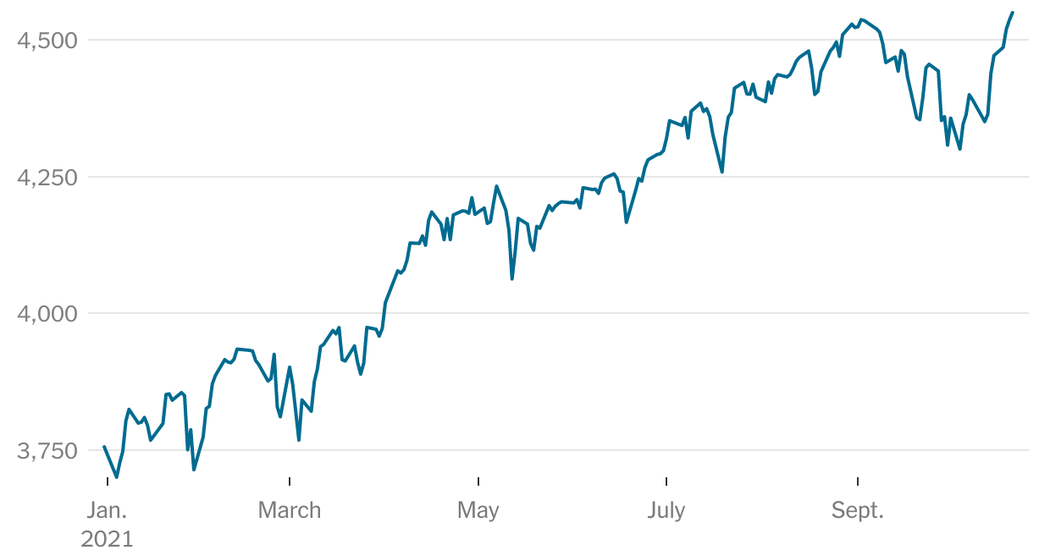 The S&P 500 inched to a new high on Thursday, continuing a rally aided by signs of progress in spending talks that could pave the way for an injection of some $3 trillion into the U.S. economy.

The index rose 0.3 percent to 4,549.78, its seventh straight day of gains and a fresh peak after more than a month of volatile trading driven by nervousness over the still-wobbly economic recovery and policy fights in Washington.

market swoon that began in September.

Share prices began to rise this month when congressional leaders struck a deal to allow the government to avoid breaching the debt ceiling, ending a standoff that threatened to make it impossible for the country to pay its bills. The rally has gained momentum as investors and analysts grow increasingly confident about a government spending package using a recipe Wall Street can live with: big enough to bolster economic growth, but with smaller corporate tax increases than President Biden’s original $3.5 trillion spending blueprint.

continuing supply chain snarls, higher prices for businesses and consumers and the Federal Reserve’s signals that it would begin dialing back its stimulus efforts all helped sour investor confidence. The S&P 500’s 4.8 percent drop in September was its worst month since the start of the pandemic.

It has made up for it in October, rising 5.6 percent this month. But it’s not just updates out of Washington that have renewed investors’ optimism.

The country has seen a sharp drop in coronavirus infections in recent weeks, raising, once again, the prospect that economic activity can begin to normalize. And the recent round of corporate earnings results that began in earnest this month has started better than many analysts expected. Large Wall Street banks, in particular, reported blockbuster results fueled by juicy fees paid to the banks’ deal makers, thanks to a surge of merger activity.

Elsewhere, shares of energy giants have also buoyed the broad stock market. The price of crude oil recently climbed back above $80 a barrel for the first time in roughly seven years, translating into an instant boost to revenues for energy companies.

debt limit, is a cap on the total amount of money that the federal government is authorized to borrow via U.S. Treasury bills and savings bonds to fulfill its financial obligations. Because the U.S. runs budget deficits, it must borrow huge sums of money to pay its bills.

When will the debt limit be breached? After Senate leaders agreed to a short-term deal to raise the debt ceiling on Oct. 7, the Treasury estimated that the government can continue borrowing through Dec. 3. The deal sets up yet another consequential deadline for the first Friday in December.

Why does the U.S. limit its borrowing? According to the Constitution, Congress must authorize borrowing. The debt limit was instituted in the early 20th century so the Treasury did not need to ask for permission each time it needed to issue bonds to pay bills.

What would happen if the debt limit was hit? Treasury Secretary Janet Yellen told Congress that inaction on raising the debt limit could lead to a self-inflicted economic recession and a financial crisis. She also said that failing to raise the debt ceiling could affect programs that help millions of Americans, including delays to Social Security payments.

Do other countries do it this way? Denmark also has a debt limit, but it is set so high that raising it is generally not an issue. Most other countries do not. In Poland, public debt cannot exceed 60 percent of gross domestic product.

What are the alternatives to the debt ceiling? The lack of a replacement is one of the main reasons the debt ceiling has persisted. Ms. Yellen said that she would support legislation to abolish the debt limit, which she described as “destructive.” It would take an act of Congress to do away with the debt limit.

On Thursday, analysts spotlighted the news that the White House and congressional Democrats were moving toward dropping corporate tax increases they had wanted to include in the bill, as they hoped to forge a deal that could clear the Senate. A spending deal without corporate tax increases would be a potential boon to profits and share prices.

“A stay of execution on higher corporate tax rates would seem a potentially noteworthy development,” Daragh Maher, a currency analyst with HSBC Securities, wrote in a note to clients on Thursday.

An agreement among Democrats on what’s expected to be a roughly $2 trillion spending plan would also open the door to a separate $1 trillion bipartisan infrastructure plan moving through Congress. Progressives in the House are blocking the infrastructure bill until agreement is reached on the larger bill.

The renewed confidence remains fragile, with good reason. The coronavirus continues to affect business operations around the world, and the Delta variant demonstrated just how disruptive a new iteration of the virus can be.

Another lingering concern involves the higher costs companies face for everything from raw materials to shipping to labor. If they are unable to pass those higher costs on to consumers, it will cut into their profits.

But going into the final months of the year — traditionally a good time for stocks — the market also has plenty of reasons to push higher.

The recent weeks of bumpy trading may have chased shareholders with low confidence — sometimes known as “weak hands” on Wall Street — out of the market, offering potential bargains to long-term buyers.

“Interest rates are relatively stable. Earnings are booming. Covid cases, thankfully, are dropping precipitously in the U.S.,” Mr. Zemsky said. “The weak hands have left the markets and there’s plenty of jobs. So why shouldn’t we have new highs?”

I expect mortgage rates to rise modestly in December, especially toward the end of the month. As we approach the end of 2021, bond traders will cash … END_OF_DOCUMENT_TOKEN_TO_BE_REPLACED