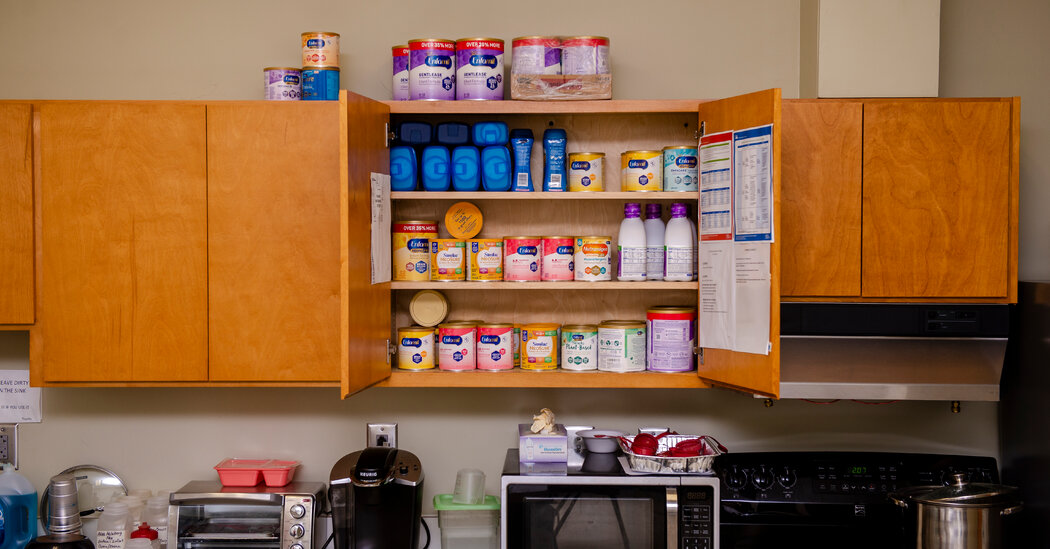 More than six months after one of the largest infant formula manufacturing plants in the United States issued a recall and was then shut down because of contamination concerns, a newborn staple remains in short supply.

In parts of the country, parents and their families are scrambling to locate precious containers of formula for their babies and many large retailers remain out of stock of popular brands. Some companies like Walmart and Target are limiting the number of containers that can be purchased at one time.

While the situation has improved since mid-July, the out-of-stock figures for powder formula on store shelves in late August remained at 23 percent, still above the 10 percent it was before the recall and shutdown, according to the Chicago-based market research firm IRI.

infections in four babies — two of them fatal — who had consumed formula manufactured at the plant. On Feb. 17, two days after the shutdown, Abbott recalled batches of three powdered formulas over complaints of serious bacterial contamination. (Abbott has said that there is no “conclusive evidence” to link the company’s formulas to the illnesses.) That disruption made it clear just how dependent Americans were on a few formula manufacturers, and the Biden administration found itself scrambling to figure out how to make more product available.

ending around Nov. 14, the F.D.A. said it would release guidance this month on how the new companies can continue to sell in the United States past this fall.

“Parents in the U.S. have been looking for a better product than what they were being offered,” said Will McMahon, one of the members of the family who owns the British baby formula Kendamil. The company has spent the last three years working through the formal process, including clinical trials, necessary to get its organic infant formula approved by the F.D.A.

Kendamil was one of the earliest formulas to get its application approved by the F.D.A. in the wake of the Sturgis plant shutdown, and the company has begun sending two million cans of formula to the United States.

dropped in early August after it said the F.D.A. had notified it that it was “deferring further consideration” of its application to import formula into the United States.

resume manufacturing of Similac formulas at its plant in Sturgis.

The company also said that it increased production at other U.S.-based manufacturing plants and one in Ireland, and that it would supply the United States with more than eight million pounds of formula in August, an increase from the year before. But it noted it would take six weeks for the Similac product from the Sturgis plant to start to hit store shelves.

But some industry experts say it will take time for Abbott to gain back the market share it once had. “To be frank, there is a lot of consumer mistrust around Similac right now,” said Mr. Dittmeier of the W.I.C. program.

That could be a boon for Reckitt Benckiser, which has been running its formula manufacturing plants at full tilt all summer, hoping to hold on to the market share it has gained at Abbott’s expense. Its market share has climbed to nearly 60 percent from 35 percent before the recall, said Robert Cleveland, who oversees the Mead Johnson nutrition business at Reckitt.

“We remain committed to making as much formula as we can,” Mr. Cleveland said. “We continue to maximize our domestic manufacturing, running overtime and going 24/7.” He added that the company had received approval to bring in formula from its plants in Singapore and specialty formula from its facilities in Mexico.

Still, in late August, when Lori Sharp, a first-time mother in Port Hueneme, Calif., realized she was down to one container of Reckitt’s Enfamil Sensitive infant formula for her 3-month-old daughter, the formula was out of stock on Walmart.com.

Panicking, she scoured more websites and widened her geographic search. She eventually discovered a container of formula at a Target 40 minutes away in Moorpark, Calif. “I went into the store and they actually had four more, but their shelves were so bare,” Ms. Sharp said. “I bought all of them.”

In Georgia, some of the most acute shortages are in rural areas. Jennifer Kelly, who is the family services manager at the early Head Start program in Swainsboro, which is between Macon and Savannah, said trying to find formula earlier this summer had become a “daily chore.”

The 14 babies she watches drink seven different kinds of formula. She and her staff were often driving to Walmart, Walgreens or a local grocery chain or scouring Amazon for some of the more obscure brands.

“It’s not like it was a few months ago when the shelves were bare,” Ms. Kelly said. “I am hoping we are on the other side of this dilemma.”

When the formula shortage was at a crisis point in May, Ms. Robinson of Bucks County, Pa., created a Facebook group that connected parents around the country. The group, called Formula Hunters, does not exchange money to keep out profiteers who have been hoarding formula and seeking to resell it at a markup.

The group operates on the notion that a parent who buys a hard-to-find formula brand and sends it to another parent in the group will eventually be repaid when others do the same for them.

Formula Hunters now has 1,500 members, who are still actively helping each other locate formula. “This has been going on for so many months,” Ms. Robinson said. “The frustration has been high.”

Danny DeVito and Rhea Perlman have listed their cozy two-bedroom Los Angeles retreat for  $1.55 million.DeVito, who stars in "It's Always … END_OF_DOCUMENT_TOKEN_TO_BE_REPLACED