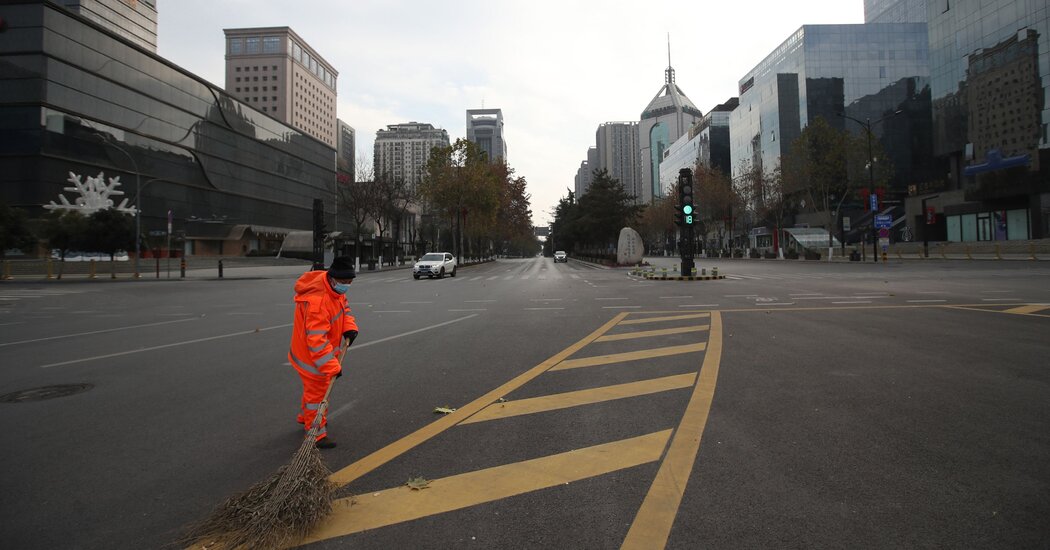 WASHINGTON — Companies are bracing for another round of potentially debilitating supply chain disruptions as China, home to about a third of global manufacturing, imposes sweeping lockdowns in an attempt to keep the Omicron variant at bay.

The measures have already confined tens of millions of people to their homes in several Chinese cities and contributed to a suspension of connecting flights through Hong Kong from much of the world for the next month. At least 20 million people, or about 1.5 percent of China’s population, are in lockdown, mostly in the city of Xi’an in western China and in Henan Province in north-central China.

The country’s zero-tolerance policy has manufacturers — already on edge from spending the past two years dealing with crippling supply chain woes — worried about another round of shutdowns at Chinese factories and ports. Additional disruptions to the global supply chain would come at a particularly fraught moment for companies, which are struggling with rising prices for raw materials and shipping along with extended delivery times and worker shortages.

China used lockdowns, contact tracing and quarantines to halt the spread of the coronavirus nearly two years ago after its initial emergence in Wuhan. These tactics have been highly effective, but the extreme transmissibility of the Omicron variant poses the biggest test yet of China’s system.

Volkswagen and Toyota announced last week that they would temporarily suspend operations in Tianjin because of lockdowns.

Analysts warn that many industries could face disruptions in the flow of goods as China tries to stamp out any coronavirus infections ahead of the Winter Olympics, which will be held in Beijing next month. On Saturday, Beijing officials reported the city’s first case of the Omicron variant, prompting the authorities to lock down the infected person’s residential compound and workplace.

If extensive lockdowns become more widespread in China, their effects on supply chains could be felt across the United States. Major new disruptions could depress consumer confidence and exacerbate inflation, which is already at a 40-year high, posing challenges for the Biden administration and the Federal Reserve.

“Will the Chinese be able to control it or not I think is a really important question,” said Craig Allen, the president of the U.S.-China Business Council. “If they’re going to have to begin closing down port cities, you’re going to have additional supply chain disruptions.”

thrown the global delivery system out of whack. Transportation costs have skyrocketed, and ports and warehouses have experienced pileups of products waiting to be shipped or driven elsewhere while other parts of the supply chain are stymied by shortages.

For the 2021 holiday season, customers largely circumvented those challenges by ordering early. High shipping prices began to ease after the holiday rush, and some analysts speculated that next month’s Lunar New Year, when many Chinese factories will idle, might be a moment for ports, warehouses and trucking companies to catch up on moving backlogged orders and allow global supply chains to return to normal.

But the spread of the Omicron variant is foiling hopes for a fast recovery, highlighting not only how much America depends on Chinese goods, but also how fragile the supply chain remains within the United States.

American trucking companies and warehouses, already short of workers, are losing more of their employees to sickness and quarantines. Weather disruptions are leading to empty shelves in American supermarkets. Delivery times for products shipped from Chinese factories to the West Coast of the United States are as long as ever — stretching to a record high of 113 days in early January, according to Flexport, a logistics firm. That was up from fewer than 50 days at the beginning of 2019.

The Biden administration has undertaken a series of moves to try to alleviate bottlenecks both in the United States and abroad, including devoting $17 billion to improving American ports as part of the new infrastructure law. Major U.S. ports are handling more cargo than ever before and working through their backlog of containers — in part because ports have threatened additional fees for containers that sit too long in their yards.

Yet those greater efficiencies have been undercut by continuing problems at other stages of the supply chain, including a shortage of truckers and warehouse workers to move the goods to their final destination. A push to make the Port of Los Angeles operate 24/7, which was the centerpiece of the Biden administration’s efforts to address supply chain issues this fall, has still seen few trucks showing up for overnight pickups, according to port officials, and cargo ships are still waiting for weeks outside West Coast ports for their turn for a berth to dock in.

“If you have four closed doors to get through and one of them opens up, that doesn’t necessarily mean quick passage,” said Phil Levy, the chief economist at Flexport. “We should not delude ourselves that if our ports become 10 percent more efficient, we’ve solved the whole problem.”

Chris Netram, the managing vice president for tax and domestic economic policy at the National Association of Manufacturers, which represents 14,000 companies, said that American businesses had seen a succession of supply chain problems since the beginning of the pandemic.

“Right now, we are at the tail end of one flavor of those challenges, the port snarls,” he said, adding that Chinese lockdowns could be “the next flavor of this.”

Manufacturers are watching carefully to see whether more factories and ports in China might be forced to shutter if Omicron spreads in the coming weeks.

Neither Xi’an nor Henan Province, the site of China’s most expansive lockdowns, has an economy heavily reliant on exports, although Xi’an does produce some semiconductors, including for Samsung and Micron Technology, as well as commercial aircraft components.

How the Supply Chain Crisis Unfolded

The pandemic sparked the problem. The highly intricate and interconnected global supply chain is in upheaval. Much of the crisis can be traced to the outbreak of Covid-19, which triggered an economic slowdown, mass layoffs and a halt to production. Here’s what happened next:

Handel Jones, the chief executive of International Business Strategies, a chip consultancy, said the impact on Samsung and Micron would be limited, but he expressed worries about the potential for broader lockdowns in cities like Tianjin or Shanghai.

stay away from any vehicle collisions involving Olympic participants, to avoid infection.

Last year, terminal shutdowns in and around Ningbo and Shenzhen, respectively the world’s third- and fourth-largest container ports by volume, led to congestion and delays, and caused some ships to reroute to other ports.

But if the coronavirus does manage to enter a big port again, the effects could quickly be felt in the United States. “If one of the big container terminals goes into lockdown,” Mr. Huxley said, “it doesn’t take long for a big backlog to develop.”

Airfreight could also become more expensive and harder to obtain in the coming weeks as China has canceled dozens of flights to clamp down on another potential vector of infection. That could especially affect consumer electronics companies, which tend to ship high-value goods by air.

For American companies, the prospect of further supply chain troubles means there may be another scramble to secure Chinese-made products ahead of potential closures.

Lisa Williams, the chief executive of the World of EPI, a company that makes multicultural dolls, said the supply chain issues were putting pressure on companies like hers to get products on the shelves faster than ever, with retailers asking for goods for the fall to be shipped as early as May.

Dr. Williams, who was an academic specializing in logistics before she started her company, said an increase in the price of petroleum and other raw materials had pushed up the cost of the materials her company uses to make dolls, including plastic accessories, fibers for hair, fabrics for clothing and plastic for the dolls themselves. Her company has turned to far more expensive airfreight to get some shipments to the United States faster, further cutting into the firm’s margins.

“Everything is being moved up because everyone is anticipating the delay with supply chains,” she said. “So that compresses everything. It compresses the creativity, it compresses the amount of time we have to think through innovations we want to do.”

Ana Swanson reported from Washington, and Keith Bradsher from Beijing.

About an hour outside of the capital city of San Juan, the sumptuous spread known as Hacienda Illusion is now on the market for $48 million. For a … END_OF_DOCUMENT_TOKEN_TO_BE_REPLACED

Kids at Hilton Aruba play with the resident birds. Hilton Aruba As summer nears, hotels around the world are making big changes and refreshing their … END_OF_DOCUMENT_TOKEN_TO_BE_REPLACED

In 1789, before the slave rebellion, the marquis bought 21 recently kidnapped Africans before leaving for France. But he didn’t indicate where they … END_OF_DOCUMENT_TOKEN_TO_BE_REPLACED