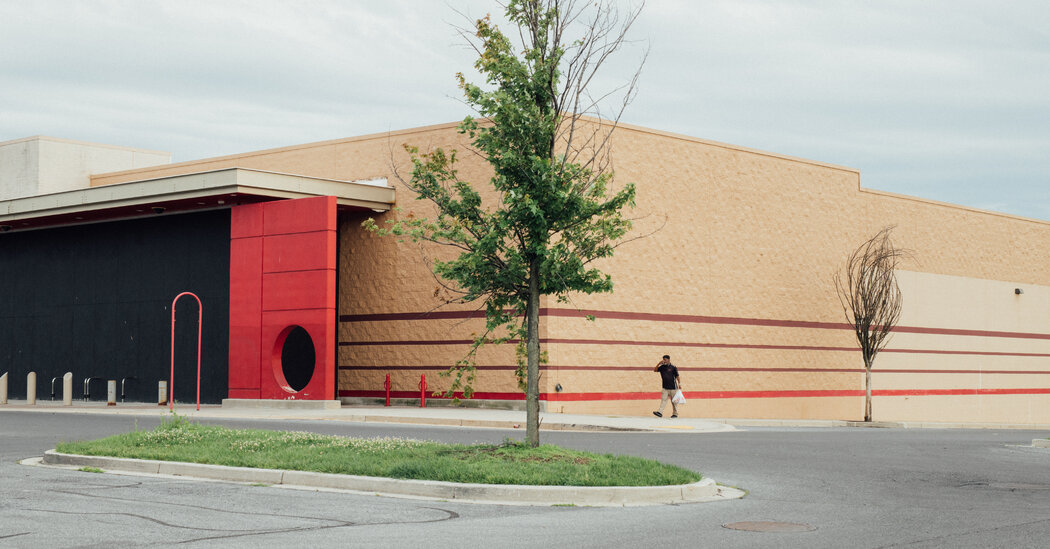 BALTIMORE — When Target announced that it was opening a store in Mondawmin, a predominantly Black neighborhood in this city struggling with crime and poverty, it seemed like a ticket to a turnaround.

And from the start, it was a practical success and a point of community pride. The store, which opened in 2008, carried groceries, operated a pharmacy and had a Starbucks cafe, the only one in this part of Baltimore’s west side.

People came from across the city to shop there, helping to soften the Mondawmin area’s reputation for crime and the looting that followed protests over the 2015 death of Freddie Gray, who was fatally injured while in city police custody. As an employer, Target seemed to cater to the community’s needs, making a point of hiring Black men and providing an office in the store for a social worker to support the staff. Elijah Cummings, the congressman from Baltimore, was known to shop there.

But in February 2018, with almost no warning or explanation, Target closed the store.

Residents, especially those without cars, lost a convenient place to shop for quality goods. And a marker of the community’s self-worth was suddenly taken away.

shut two stores in predominantly Black neighborhoods on Chicago’s South Side as the company made plans to build a new store on the wealthier and mostly white North Side.

according to local legend, visited the property in the 19th century and observed the area’s bountiful cornfields. Mondawmin is derived from a Native American phrase for “spirit of corn.”

In the 1950s, the property was sold to a real estate developer, who turned the rural lot into the city’s first shopping mall.

The Mondawmin Mall featured a Sears, a five-and-dime, and eventually an indoor fountain and spiral staircase, advertised as the “seventh wonder of Baltimore,’’ according to Salvatore Amadeo, an amateur historian who makes YouTube documentaries about malls, including a segment on Mondawmin.

When the assassination of the Rev. Dr. Martin Luther King Jr. in 1968 sparked protests across Baltimore and caused “white flight” to the suburbs, the mall struggled. Over time, it ceased to be a big draw for shoppers outside the area.

The stores became more focused on Black fashion and neighborhood services. A large barbershop occupies the mall’s bottom floor, and there is an agency that helps formerly incarcerated people find jobs.

a forceful statement, promising to reopen one of its stores in Minneapolis damaged in the protests against police violence.

“The murder of George Floyd has unleashed the pent-up pain of years, as have the killings of Ahmaud Arbery and Breonna Taylor,” Mr. Cornell said in the statement. “We say their names and hold a too-long list of others in our hearts. As a Target team, we’ve huddled, we’ve consoled, we’ve witnessed horrific scenes similar to what’s playing out now and wept that not enough is changing.”

One of the names on that “too-long list” is Freddie Gray. Mr. Gray was from Baltimore’s west side and was arrested a few blocks from the Mondawmin Mall in April 2015 for possessing a knife.

prosecutors described as a “rough ride,” his spinal cord was 80 percent severed.

One of the first big waves of protests over his death occurred at the Mondawmin Mall. Protesters began throwing rocks at police officers, and the mall was looted. Some students from Frederick Douglass High School, across from the mall and the alma mater of the civil rights giant Thurgood Marshall, the first Black man to serve on the U.S. Supreme Court, were caught up in the melee.

Target was spared serious damage. But for a time, many shoppers, both Black and white, stayed away from the store, recalled Mr. Johnson, who now works for the Postal Service.

“Mondawmin already had a bad rap with out-of-towners,” he said.

Shoppers eventually returned to the Target in Mondawmin, he said. But he noticed that the city’s other Target store, which had opened in a trendy area near the harbor in 2013, was getting more popular.

In November 2017, Mr. Mosby, then a state lawmaker, got a call from a resident whose family worked at the store: The Target in Mondawmin was shutting its doors in a few months. “I thought it was a just a rumor at first,” Mr. Mosby said.

Some residents and neighborhood leaders were told that the store struggled with high rates of theft, known in the retail industry as “shrinkage.” But Mr. Ali, the store’s former manager, said, “That was untrue,” at least while he worked there. The store met its profit and shrinkage goals during his four years as manager, which ended in 2012, years before the store closed.

Still, Mr. Ali, now the executive director of a youth mentoring group, acknowledged challenges that he said were unique to a store in a “hyper-urban area.”

A significant amount of inventory was once damaged in a fire in a storage area next to the store, and the company had to spend $30,000 a month for an armed Baltimore police officer to keep watch, he said.

There may have been additional considerations. “I think what happened after Freddie Gray spooked Target,” Mr. Ali said.

Other national chains reacted differently. TGI Fridays stuck with its plans to open a restaurant at the Mondawmin Mall, months after the protests. The restaurant remains one of the neighborhood’s only free-standing, sit-down chain restaurants.

Mr. Mosby and other officials tried to negotiate with Target to keep the store open, but the company said its mind was already made up.

“They weren’t interested in talking to us,” Mr. Mosby said. “They wouldn’t budge.”

The temperature gauge outside Pastor Lance’s car registered 103 degrees as he drove through Greater Mondawmin and its surrounding neighborhoods. He was wearing a white shirt emblazoned with his church’s logo — a group of people, of all races and backgrounds, walking toward the sun, holding hands.

A Baltimore native, Pastor Lance used to work as a computer programmer at Verizon. He made “lots of money,” he said. “But I didn’t feel fulfilled.”

He became a pastor and took over a nonprofit company that develops park space and playgrounds and hosts a summer camp for schoolchildren with a garden surrounded by a meadow near the mall.

“But some days, I wonder if I made a mistake,” he said. “It’s great to have a park, but if you don’t have a good job, you aren’t going to be able to enjoy a park.”

He drove along a street with liquor stores and houses with boarded-up windows. A woman tried to flag him down for a ride. But the poverty he saw was not what made him most upset.

It was when Pastor Lance steered through an enclave of big houses and immaculate lawns, only a short distance away, that the anger rose in his voice.

“You are telling me that these people wouldn’t shop at Target for lawn furniture or school supplies,” he said. “I am not trying to gloss over the problems, but there is also wealth here.”

“If shrinkage was a problem, hire more security guards or use technology to stop people from stealing,” he added.

He circled back to the Mondawmin Mall, where families ducked into the air conditioning for a bubble tea or an Auntie Anne’s pretzel. He drove past the TGI Fridays and then past the Target, its windows still covered in plywood and the trees in the parking lot looking withered and pathetic.

Pastor Lance refused to accept that a Target could not succeed here.

“If you are really interested in equity and justice,” he said, “figure out how to make that store work.”

Helene Thiesen was one of 22 Inuiit children separated from their families in Greenland 70 years ago. Editor’s note: This story is part of CNN’s … END_OF_DOCUMENT_TOKEN_TO_BE_REPLACED