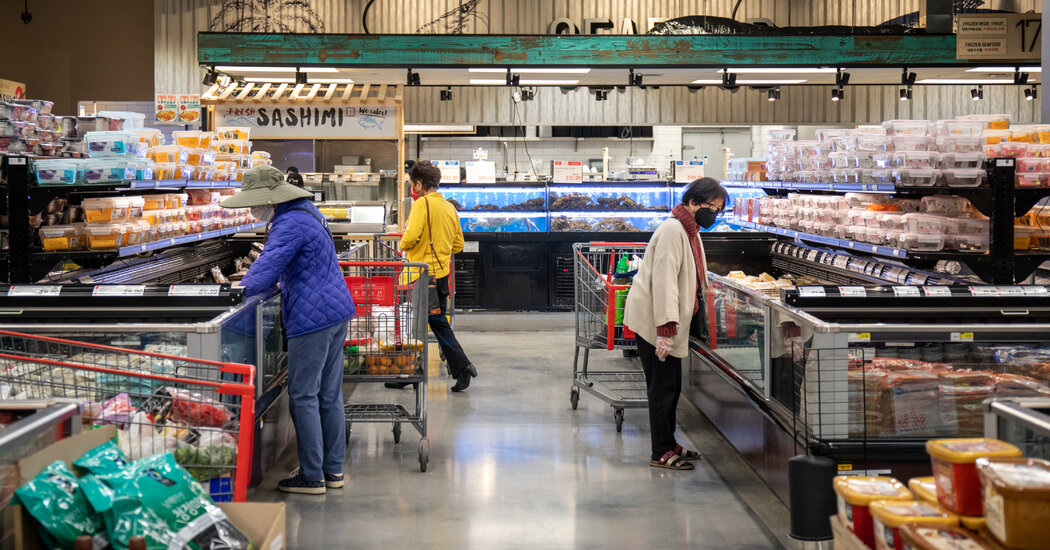 At the H Mart on Broadway at 110th Street in Manhattan, the lights are bright on the singo pears, round as apples and kept snug in white mesh, so their skin won’t bruise. Here are radishes in hot pink and winter white, gnarled ginseng grown in Wisconsin, broad perilla leaves with notched edges, and almost every kind of Asian green: yu choy, bok choy, ong choy, hon choy, aa choy, wawa choy, gai lan, sook got.

For decades in America, this kind of shopping was a pilgrimage. Asian-Americans couldn’t just pop into the local Kroger or Piggly Wiggly for a bottle of fish sauce. To make the foods of their heritage, they often had to seek out the lone Asian grocery in town, which was salvation — even if cramped and dingy, with scuffed linoleum underfoot and bags of rice slumped in a corner.

1.5 percent of the American population was of Asian descent.

beaten to death in Detroit by two white autoworkers who were reportedly angered by the success of the Japanese car industry. Asian-Americans, a disparate group of many origins that had historically not been recognized as a political force, came together to condemn the killing and speak in a collective voice.

Today, as they again confront hate-fueled violence, Asian-Americans are the nation’s fastest-growing racial or ethnic group, numbering more than 22 million, nearly 7 percent of the total population. And there are 102 H Marts across the land, with vast refrigerated cases devoted to kimchi and banchan, the side dishes essential to any Korean meal. In 2020, the company reported $1.5 billion in sales. Later this year, it’s set to open its largest outpost yet, in a space in Orlando, Fla., that is nearly the size of four football fields.

And H Mart has competition: Other grocery chains that specialize in ingredients from Asia include Patel Brothers (Patel Bros, to fans), founded in Chicago; and, headquartered in California, Mitsuwa Marketplace and 99 Ranch Market — or Ranch 99, as Chinese speakers sometimes call it. They’re part of a so-called ethnic or international supermarket sector estimated to be worth $46.1 billion, a small but growing percentage of the more than $653 billion American grocery industry.

Japanese Breakfast, in her new memoir, “Crying in H Mart,” published last month. The book begins with her standing in front of the banchan refrigerators, mourning the death of her Korean-born mother. “We’re all searching for a piece of home, or a piece of ourselves.”

As the 20th-century philosopher Lin Yutang wrote, “What is patriotism but the love of the food one ate as a child?”

For an immigrant, cooking can be a way to anchor yourself in a world suddenly askew. There is no end to the lengths some might go to taste once more that birthday spoonful of Korean miyeok guk, a soup dense with seaweed, slippery on the tongue, or the faintly bitter undertow of beef bile in Laotian laap diip (raw beef salad).

When Vilailuck Teigen — the co-author, with Garrett Snyder, of “The Pepper Thai Cookbook,” out in April — was a young mother in western Utah in the 1980s, she ordered 50-pound bags of rice by mail and drove 150 miles to Salt Lake City to buy chiles. She had no mortar and pestle, so she crushed spices with the bottom of a fish-sauce bottle.

Snackboxe Bistro in Atlanta, was a child in a small town in east-central Alabama, where her family settled after fleeing Laos as refugees. They fermented their own fish sauce, and her father made a weekly trek to Atlanta to pick up lemongrass and galangal at the international farmers’ market.

The essayist Jay Caspian Kang has described Americans of Asian descent as “the loneliest Americans.” Even after the government eased restrictions on immigration from Asia in 1965, being an Asian-American outside major cities often meant living in isolation — the only Asian family in town, the only Asian child at school. A grocery store could be a lifeline.

When the writer Jenny Han, 40, was growing up in Richmond, Va., in the ’90s, her family shopped at the hole-in-the-wall Oriental Market, run by a woman at their church. It was the one place where they could load up on toasted sesame oil and rent VHS tapes of Korean dramas, waiting to pounce when someone returned a missing episode.

A few states away, the future YouTube cooking star Emily Kim — better known as Maangchi — was newly arrived in Columbia, Mo., with a stash of meju, bricks of dried soybean paste, hidden at the bottom of her bag. She was worried that in her new American home she wouldn’t be able to find such essentials.

Then she stumbled on a tiny shop, also called Oriental Market. One day the Korean woman at the counter invited her to stay for a bowl of soup her husband had just made.

“She was my friend,” Maangchi recalled.

Kim’s Convenience” might say, a sneak attack. Once Brian Kwon entered the office, he never left. “My father called it his ‘golden plan,’ after the fact,” he said ruefully. He is now a co-president, alongside his mother and his sister, Stacey, 33. (His father is the chief executive.)

For many non-Asian customers, H Mart is itself a sneak attack. On their first visit, they’re not actually looking for Asian ingredients; customer data shows that they’re drawn instead to the variety and freshness of more familiar produce, seafood and meat. Only later do they start examining bags of Jolly Pong, a sweet puffed-wheat snack, and red-foil-capped bottles of Yakult — a fermented milk drink that sold out after it appeared in Ms. Han’s best-selling novel-turned-movie “To All The Boys I’ve Loved Before.”

To be welcoming to non-Koreans, H Mart puts up signs in English. At the same time, the younger Mr. Kwon said, “We don’t want to be the gentrified store.” So while some non-Asians recoil from the tanks of lobsters, the Kwons are committed to offering live seafood.

Sunday Family Hospitality Group, in San Francisco, remembers the H Mart of his youth in New Jersey as “just the Korean store” — a sanctuary for his parents, recent immigrants still not at ease in English. Everyone spoke Korean, and all that banchan was a relief: His mother would pack them in her cart for dinner, then pretend she’d made them herself.

Later, as a teenager, he started seeing his Chinese- and Filipino-American friends there, too, and then his non-Asian friends. Spurred by postings on social media, young patrons would line up to buy the latest snack sensation — “the snack aisle is notorious,” Mr. Hong said — like Haitai honey butter chips and Xiao Mei boba ice cream bars. (The current craze: Orion chocolate-churro-flavored snacks that look like baby turtles.)

In “Mister Jiu’s in Chinatown,” a new cookbook by the chef Brandon Jew and Tienlon Ho, Mr. Jew, 41, recalls Sunday mornings in San Francisco with his ying ying (paternal grandmother in Cantonese), taking three bus transfers to traverse the city, on a mission for fresh chicken — sometimes slaughtered on the spot — and ingredients like pea shoots and lotus leaves.

He still prefers “that Old World kind of shopping,” he said, from independent vendors, each with his own specialties and occasional grouchiness and eccentricities. But he knows that the proliferation of supermarkets like H Mart and 99 Ranch makes it easier for newcomers to Asian food to recreate his recipes.

Chai Pani in Asheville, N.C., and Atlanta, feels that something is lost when you buy paneer and grass-fed ghee at a Whole Foods Market. You miss the cultural immersion, he says, “getting a dunk and having horizons broadened.”

“An Indian grocery is not just a convenience — it’s a temple,” he said. “You’re feeding the soul. Come in and pick up on the energy.”

In the TV special “Luda Can’t Cook,” which premiered in February, Mr. Irani takes the rapper Ludacris to Cherians, an Indian supermarket in Atlanta. Once Mr. Irani had to scrounge for spices like cumin and turmeric at health food stores; now, surrounded by burlap sacks stuffed with cardamom pods and dried green mango, he tells Ludacris, “This is my house.”

Min Jin Lee, 52, remembers how important H Mart was to people working in Manhattan’s Koreatown in the ’80s, when it was still called Han Ah Reum and “tiny, with almost no place to negotiate yourself through the aisles,” she said. (It has since moved across West 32nd Street to a larger space.) Her parents ran a jewelry wholesale business around the corner, and relied on the store for a cheap but substantial dosirak (lunch box) that came with cups of soup and rice.

She sees the modern incarnation of the store as a boon for second- and third-generation Korean Americans, including thousands of Korean-born adoptees raised by white American parents, who “want to find some sort of connection to the food of their families,” she said. “There aren’t gatekeepers to say who’s in or who’s out.”

For Ms. Lee, this makes H Mart a comfort. “I like going there because I feel good there,” she said. “In the context of hatred against my community, to see part of my culture being valued — it’s exceptional.”

AUSTIN, Texas--(BUSINESS WIRE)--As the first multifamily management company to be recognized in the Public Relations and Marketing Excellence Awards, … END_OF_DOCUMENT_TOKEN_TO_BE_REPLACED

There have been whispers of cooling housing and rental prices in the San Francisco Bay Area, but that hasn't yet translated into practical, noticeable … END_OF_DOCUMENT_TOKEN_TO_BE_REPLACED

Cars pass in Independence Square at twilight in Kyiv, Ukraine, Monday, Oct. 31, 2022. Rolling ... [+] blackouts are increasing across Ukraine as the … END_OF_DOCUMENT_TOKEN_TO_BE_REPLACED