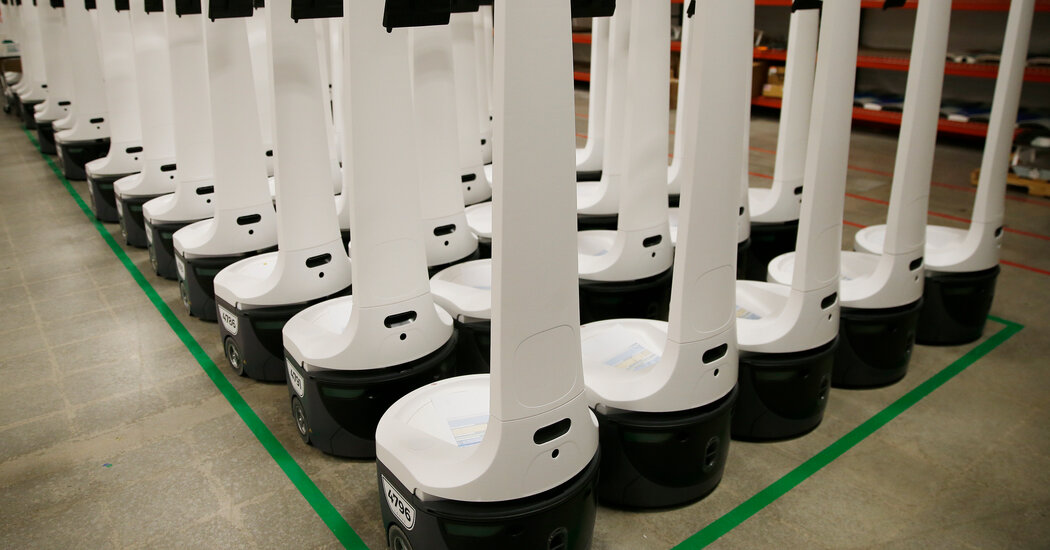 The people running companies that deliver all manner of products gathered in Philadelphia last week to sift through the lessons of the mayhem besieging the global supply chain. At the center of many proposed solutions: robots and other forms of automation.

On the showroom floor, robot manufacturers demonstrated their latest models, offering them as efficiency-enhancing augments to warehouse workers. Driverless trucks and drones commanded display space, advertising an unfolding era in which machinery will occupy a central place in bringing products to our homes.

The companies depicted their technology as a way to save money on workers and optimize scheduling, while breaking down resistance to a future centered on evolving forms of automation.

persistent economic shocks have intensified traditional conflicts between employers and employees around the globe. Higher prices for energy, food and other goods — in part the result of enduring supply chain tangles — have prompted workers to demand higher wages, along with the right to continue working from home. Employers cite elevated costs for parts, raw materials and transportation in holding the line on pay, yielding a wave of strikes in countries like Britain.

The stakes are especially high for companies engaged in transporting goods. Their executives contend that the Great Supply Chain Disruption is largely the result of labor shortages. Ports are overwhelmed and retail shelves are short of goods because the supply chain has run out of people willing to drive trucks and move goods through warehouses, the argument goes.

Some labor experts challenge such claims, while reframing worker shortages as an unwillingness by employers to pay enough to attract the needed numbers of people.

“This shortage narrative is industry-lobbying rhetoric,” said Steve Viscelli, an economic sociologist at the University of Pennsylvania and author of “The Big Rig: Trucking and the Decline of the American Dream.” “There is no shortage of truck drivers. These are just really bad jobs.”

A day spent wandering the Home Delivery World trade show inside the Pennsylvania Convention Center revealed how supply chain companies are pursuing automation and flexible staffing as antidotes to rising wages. They are eager to embrace robots as an alternative to human workers. Robots never get sick, not even in a pandemic. They never stay home to attend to their children.

A large truck painted purple and white occupied a prime position on the showroom floor. It was a driverless delivery vehicle produced by Gatik, a Silicon Valley company that is running 30 of them between distribution centers and Walmart stores in Texas, Louisiana and Arkansas.

Here was the fix to the difficulties of trucking firms in attracting and retaining drivers, said Richard Steiner, Gatik’s head of policy and communications.

“It’s not quite as appealing a profession as it once was,” he said. “We’re able to offer a solution to that trouble.”

Nearby, an Israeli start-up company, SafeMode, touted a means to limit the notoriously high turnover plaguing the trucking industry. The company has developed an app that monitors the actions of drivers — their speed, the abruptness of their braking, their fuel efficiency — while rewarding those who perform better than their peers.

The company’s founder and chief executive, Ido Levy, displayed data captured the previous day from a driver in Houston. The driver’s steady hand at the wheel had earned him an extra $8 — a cash bonus on top of the $250 he typically earns in a day.

“We really convey a success feeling every day,” Mr. Levy, 31, said. “That really encourages retention. We’re trying to make them feel that they are part of something.”

Mr. Levy conceived of the company with a professor at the M.I.T. Media Lab who tapped research on behavioral psychology and gamification (using elements of game playing to encourage participation).

So far, the SafeMode system has yielded savings of 4 percent on fuel while increasing retention by one-quarter, Mr. Levy said.

Another company, V-Track, based in Charlotte, N.C., employs a technology that is similar to SafeMode’s, also in an effort to dissuade truck drivers from switching jobs. The company places cameras in truck cabs to monitor drivers, alerting them when they are looking at their phones, driving too fast or not wearing their seatbelt.

Jim Becker, the company’s product manager, said many drivers hade come to value the cameras as a means of protecting themselves against unwarranted accusations of malfeasance.

But what is the impact on retention if drivers chafe at being surveilled?

Several companies on the show floor catered to trucking companies facing difficulties in hiring people to staff their dispatch centers. Their solution was moving such functions to countries where wages are lower.

Lean Solutions, based in Fort Lauderdale, Fla., sets up call centers in Colombia and Guatemala — a response to “the labor challenge in the U.S.,” said Hunter Bell, a company sales agent.

A Kentucky start-up, NS Talent Solutions, establishes dispatch operations in Mexico, at a saving of up to 40 percent compared with the United States.

“The pandemic has helped,” said Michael Bartlett, director of sales. “The world is now comfortable with remote staffing.”

Scores of businesses promoted services that recruit and vet part-time and temporary workers, offering a way for companies to ramp up as needed without having to commit to full-time employees.

Pruuvn, a start-up in Atlanta, sells a service that allows companies to eliminate employees who recruit and conduct background checks.

“It allows you to get rid of or replace multiple individuals,” the company’s chief executive, Bryan Hobbs, said during a presentation.

Another staffing firm, Veryable of Dallas, offered a platform to pair workers such as retirees and students seeking part-time, temporary stints with supply chain companies.

Jonathan Katz, the company’s regional partnerships manager for the Southeast, described temporary staffing as the way for smaller warehouses and distribution operations that lack the money to install robots to enhance their ability to adjust to swings in demand.

A drone company, Zipline, showed video of its equipment taking off behind a Walmart in Pea Ridge, Ark., dropping items like mayonnaise and even a birthday cake into the backyards of customers’ homes. Another company, DroneUp, trumpeted plans to set up similar services at 30 Walmart stores in Arkansas, Texas and Florida by the end of the year.

But the largest companies are the most focused on deploying robots.

Locus, the manufacturer, has already outfitted 200 warehouses globally with its robots, recently expanding into Europe and Australia.

Locus says its machines are meant not to replace workers but to complement them — a way to squeeze more productivity out of the same warehouse by relieving the humans of the need to push the carts.

But the company also presents its robots as the solution to worker shortages. Unlike workers, robots can be easily scaled up and cut back, eliminating the need to hire and train temporary employees, Melissa Valentine, director of retail global accounts at Locus, said during a panel discussion.

Locus even rents out its robots, allowing customers to add them and eliminate them as needed. Locus handles the maintenance.

Robots can “solve labor issues,” said Nathan Ray, director of distribution center operations at Albertsons, the grocery chain, who previously held executive roles at Amazon and Target. “You can find a solution that’s right for your budget. There’s just so many options out there.”

As Mr. Ray acknowledged, a key impediment to the more rapid deployment of automation is fear among workers that robots are a threat to their jobs. Once they realize that the robots are there not to replace them but merely to relieve them of physically taxing jobs like pushing carts, “it gets really fun,” Mr. Ray said. “They realize it’s kind of cool.”

Workers even give robots cute nicknames, he added.

But another panelist, Bruce Dzinski, director of transportation at Party City, a chain of party supply stores, presented robots as an alternative to higher pay.

“You couldn’t get labor, so you raised your wages to try to get people,” he said. “And then everybody else raised wages.”

Soon after Herschel Walker, the former football star, announced he would run for U.S. Senate in Georgia as a Republican, his son Christian appeared … END_OF_DOCUMENT_TOKEN_TO_BE_REPLACED

SpaceX launched four people to the International Space Station from Florida on Wednesday, as Elon Musk's company keeps up a steady pace of crewed … END_OF_DOCUMENT_TOKEN_TO_BE_REPLACED