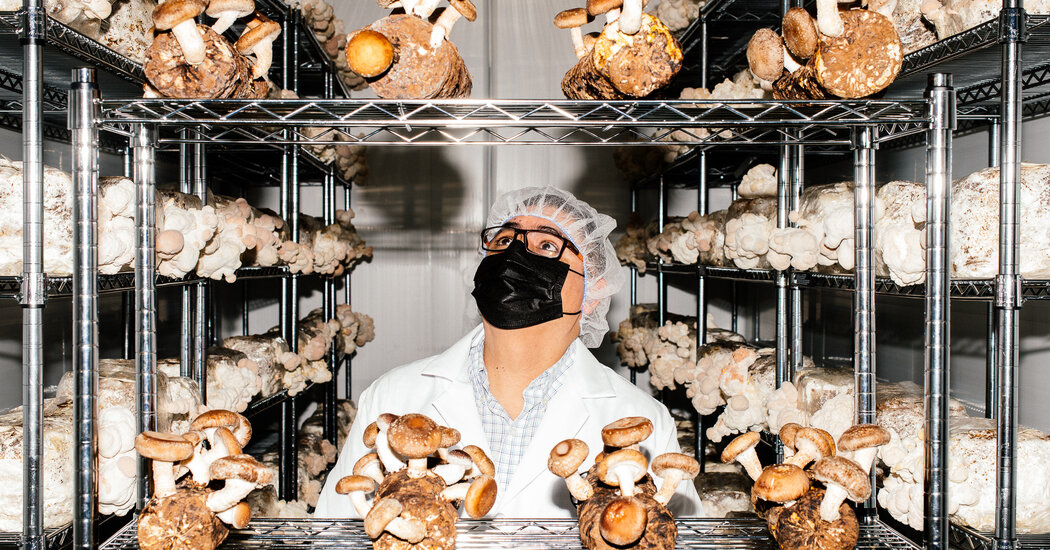 Inside a state-of-the-art lab, tucked in an industrial neighborhood on Vancouver Island in British Columbia, employees wearing protective suits move around two clear boxes, careful not to disrupt the tubes and sensors that keep temperature and humidity constant. Inside the boxes are mushrooms.

But not just any mushrooms. They are psychedelic — “magic” — mushrooms that the start-up Numinus Wellness believes one day may be used to treat mental health conditions as varied as depression, substance abuse and anxiety.

Welcome to the ’Shroom Boom. While Numinus is using mushrooms to make mind-altering therapies, other mushroom growers are promising other benefits, like strengthening immune systems or reducing inflammation. Mushrooms are showing up in all sorts of wellness products, pushing them into the mainstream and making mushrooms a major force in the flourishing, multibillion-dollar wellness market.

legalize psilocybin, the main active ingredient in “magic” mushrooms, for the treatment of certain mental health conditions in supervised settings. In March, the New York City mayoral candidate Andrew Yang said New York State should legalize psychedelic mushrooms, a stance he raised in 2019 when he was a Democratic presidential candidate.

Regulators in the United States and Canada are taking baby steps toward allowing limited use of psychedelic mushrooms, which produce visual and auditory hallucinations over a few hours after ingestion, for the treatment of certain mental health conditions. Popular as part of the counterculture in the 1960s, magic mushrooms were deemed illegal in the United States in the 1970s.

New York in March. But some analysts and many of the companies themselves caution that the path for psychedelics will most likely be very different.

study by researchers at Johns Hopkins Medicine that found use of psilocybin relieved anxiety and depression in people with a life-threatening cancer diagnosis. A second, small study involving 24 participants conducted by Johns Hopkins researchers that was published in JAMA Psychiatry found that those who received psilocybin-assisted therapy showed improvement as well.

“The magnitude of the effect we saw was about four times larger than what clinical trials have shown for traditional antidepressants on the market,” Alan Davis, adjunct assistant professor of psychiatry and behavioral sciences at the Johns Hopkins University School of Medicine, said in an announcement about the study’s results.

The Food and Drug Administration has put at least two psychedelic mushroom compounds on the fast track for approval to treat depression.

Last year, Canada began allowing a limited number of people with terminal illness to use psychedelic mushrooms. Currently, Numinus is working toward a psilocybin-assisted therapy trial for patients with substance abuse disorders.

And while regulators in the United States are taking a new look at psychedelic mushrooms, psilocybin is still a Schedule 1 drug and would need to be reclassified by regulators.

Despite those hurdles, though, Mr. Nyquvest sees the potential for a broader use of psychedelic mushrooms around wellness, beyond what he called “treating really heavy indicators” of substance abuse and depression.

“The same way you go to the dentist to take care of the teeth, we need to think about taking care of the brain and mental well being.”

There were no arrests in three quarters of last year’s fatal shootings, according to statistics provided by Mr. Krasner’s office, even as arrests for … END_OF_DOCUMENT_TOKEN_TO_BE_REPLACED