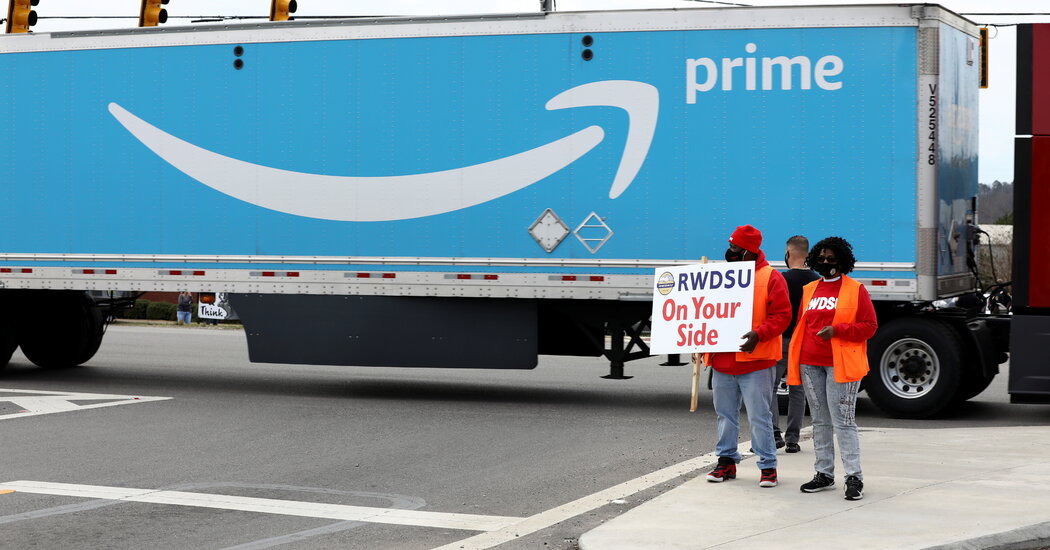 Amazon faces a unionization drive at a warehouse in Bessemer, Ala. — the largest and most viable U.S. labor challenge in years. The Times’s David Streitfeld looked into the e-commerce giant’s previous efforts to block organized labor. He found a host of tough tactics … that worked. Will they again?

Among Amazon’s steps to oppose a unionization drive in Chester, Va. five years ago, according to regulatory documents and employees:

Amazon secretly reached a settlement with the National Labor Relations Board, after the union behind the drive lodged a complaint. The company was required to post notices around the warehouse promising good behavior, though it did not have to admit to labor law violations or pay financial penalties.

Organizers of the Alabama unionization effort say the company has tried similar tactics. Amazon, they assert, tried to surveil employees while posting notices around the Bessemer warehouse bad-mouthing the union. (One claimed workers would need to skimp on dinner to pay union dues.) Management even changed a traffic signal to hinder organizers’ efforts to approach workers.

Union organizers are pessimistic. Nearly 6,000 workers at the Bessemer warehouse have until March 29 to decide whether to join the Retail, Wholesale and Department Store Union. “They will fall to threats or think, ‘I won’t have a job, Amazon will replace me,’” Mr. Hough told The Times. He added, “I’m hoping for the best.” In a statement, Amazon said it did not believe the union push in Alabama “represents the majority of our employees’ views.”

More European countries suspend the use of AstraZeneca’s vaccine. Germany, France, Italy and Spain paused the inoculations amid reports that a handful of recipients had developed blood clots. Medical experts said there was “no evidence” linking the vaccine to increased risk of clots, but the moves could add to the problems of Europe’s vaccination initiatives.

improve vehicle charging times, as well as build six battery factories. One analyst said it served as “a blueprint for what legacy carmakers need to achieve.”

Warren Buffett bucks calls for E.S.G. disclosures. In Berkshire Hathaway’s annual proxy, Mr. Buffett’s conglomerate urged shareholders to reject proposals for more transparency of climate-related risks and diversity and inclusion efforts. It’s a marked contrast to the increasing disclosure into environmental, social and corporate governance issues (more on that below).

The Sackler family may relinquish control of OxyContin’s maker. Purdue Pharma has released its bankruptcy restructuring plan, which includes a pledge from its founding family to pay $4.3 billion — $1.3 billion more than previously offered — to reimburse the costs of the opioid epidemic.

A day after the chairman and C.E.O. of Danone, Emmanuel Faber, stepped down under pressure from activist investors, other shareholders in the French food giant are turning on the activists. CtW, an adviser to union pension funds with over $250 billion in assets, sent a sharply worded letter yesterday to Artisan Partners, which led the revolt over Mr. Faber’s leadership. The twist in the letter, which was reviewed by DealBook, is that CtW owns a “substantial” number of Artisan shares — and said that the fund needs the sort of governance shake-up it pushed for Danone.

Entreprise à Mission,” which allows companies to take greater consideration of social and environmental issues in their business model. Some 99 percent of shareholders backed the move, but not Artisan Partners. Danone’s performance has recently lagged behind competitors like Nestle and Unilever, Artisan said when calling for boardroom changes, including someone other than Mr. Faber becoming chairman.

CtW says Artisan’s own policies are inconsistent with its demands at Danone. Notably, Eric Colson serves as Artisan’s chairman and C.E.O. “Artisan’s call for an independent chair at Danone while maintaining the positions of C.E.O. and chair combined on its own board is inconsistent with best governance practices,” wrote Dieter Waizenegger, CtW’s executive director. He also questioned the firm’s use of “large discretionary cash bonuses” and demanded a discussion with management by the end of the month. Artisan did not respond to a request for comment.

“The economics of investing in bonds (and most financial assets) has become stupid.”

— Ray Dalio of Bridgewater Associates on the state of the markets.

an important speech by Allison Herren Lee, the acting chair of the Securities and Exchange Commission, on environmental, social and governance (E.S.G.) issues. Investors are increasingly demanding more corporate disclosure on these factors, and she suggested that voluntary regimes are not enough. “No single issue has been more pressing for me than ensuring that the S.E.C. is fully engaged in confronting the risks and opportunities that climate and E.S.G. pose for investors, our financial system and our economy,” she said.

We asked Ms. Lee a few more questions about the scope and timing of the agency’s initiatives. Her responses have been edited for clarity and length.

said that an increased focus on E.S.G. “would be a total abuse of power and a politicization of S.E.C.’s disclosure standard.”

The Myanmar military’s bloody crackdown on the nationwide resistance to its rule showed no sign of easing on Sunday, with a human rights group … END_OF_DOCUMENT_TOKEN_TO_BE_REPLACED

Secretary of State Antony J. Blinken on Sunday criticized the Chinese government for a lack of transparency during the pandemic, particularly during … END_OF_DOCUMENT_TOKEN_TO_BE_REPLACED

DAVOREN PARK, Australia — No one really knows when backyard sheds became meaningful to men, as a retreat and a place to tinker. But in the late 1990s, … END_OF_DOCUMENT_TOKEN_TO_BE_REPLACED