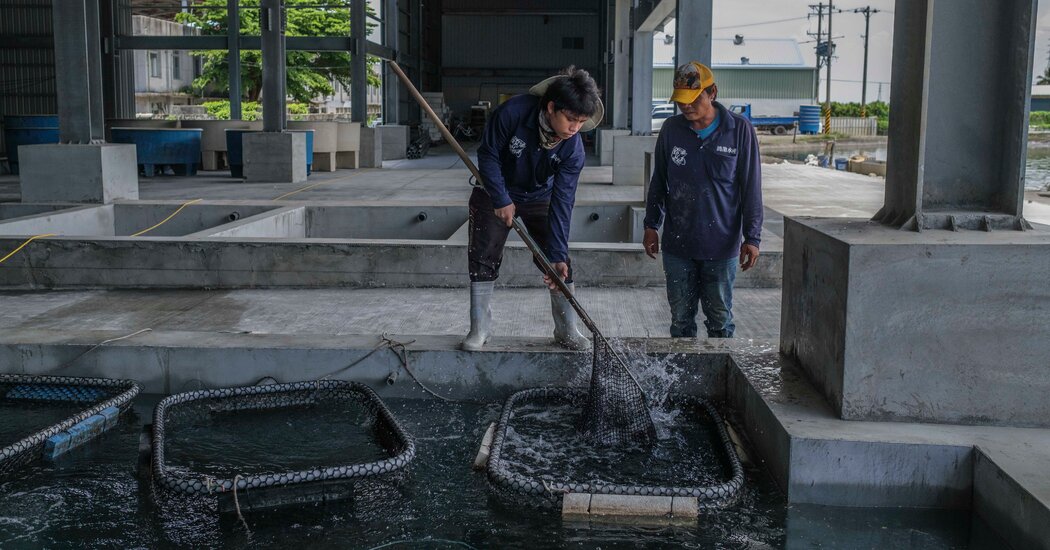 FANGLIAO, Taiwan — Lin Chun-lai bought his grouper farm in southern Taiwan about a decade ago with an eye on mainland China’s growing appetite for live fish. In just a few years, the former electrician made enough money to comfortably support his family of four and even open a small inn.

Then China abruptly banned all imports of grouper from the island, in an apparent attempt at turning the economic screws on Taiwan, a self-governed island that Beijing claims as its own territory. The move cut Mr. Lin and other farmers like him off from their main market, putting their livelihoods at risk and dealing a huge blow to a lucrative industry.

Taiwan’s unification with China is inevitable, but most of Taiwan’s 23 million people are in favor of maintaining the island’s de facto independence. As Beijing has ramped up pressure on the island, Taiwan has moved to strengthen economic and diplomatic ties with friendlier countries, including the United States, those in the European Union and Japan.

In recent years, Beijing has sent military aircraft toward the island almost daily. It has tried to isolate Taiwan, peeling off its few remaining diplomatic allies and blocking it from joining international organizations. It has also increasingly sought to restrict the island’s access to China’s vast consumer market, banning Taiwanese pineapples, then wax apples, last year after it said the fruits brought in pests.

their ties to forced labor practices could portend trouble for industries that depend on materials from China.

In recent days, Taiwanese agricultural authorities have contacted grouper farmers to discuss ways that the government can help, including by providing low-interest loans and feed subsidies and expanding access to domestic consumers and overseas markets. Another idea being floated is to include the fish in individually packaged meal boxes sold at train stations and on trains by Taiwan’s railway administration. Taiwan’s Fisheries Agency said on Tuesday that the agency would spend more than $13 million to support the grouper industry.

Taiwan’s Council of Agriculture has said it would consider filing a complaint about the grouper ban to the World Trade Organization. Lin Kuo-ping, the deputy director general of the official Fisheries Agency, said the government had reached out to their Chinese counterparts to discuss the inspection process but had not heard back. China’s General Administration of Customs did not respond to an emailed request for comment.

Some grouper farmers said that if the ban was not lifted, they would have to settle for selling the fish on the domestic market at a huge loss. Until then, the fish will remain in the ponds. Mr. Lin, the grouper farmer, said he worried the groupers could die as a result of overcrowding.

He is now pinning his hopes on another kind of fish that he has been farming, the four-finger threadfin fish, which is also popular on the mainland. But he acknowledged that even this backup strategy was vulnerable to geopolitical shifts. Last year, Taiwan’s exports of the fish were worth nearly $40 million — and more than 70 percent went to China.

“Our biggest customer,” he said, “is still China.”

AUSTIN, Texas--(BUSINESS WIRE)--As the first multifamily management company to be recognized in the Public Relations and Marketing Excellence Awards, … END_OF_DOCUMENT_TOKEN_TO_BE_REPLACED

There have been whispers of cooling housing and rental prices in the San Francisco Bay Area, but that hasn't yet translated into practical, noticeable … END_OF_DOCUMENT_TOKEN_TO_BE_REPLACED

Cars pass in Independence Square at twilight in Kyiv, Ukraine, Monday, Oct. 31, 2022. Rolling ... [+] blackouts are increasing across Ukraine as the … END_OF_DOCUMENT_TOKEN_TO_BE_REPLACED