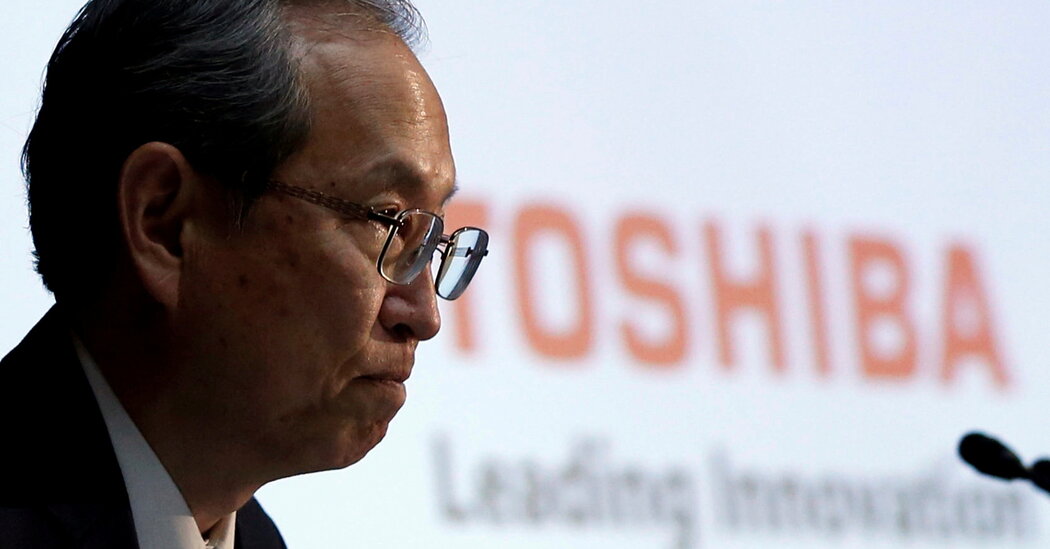 Toshiba announced on Wednesday the resignation of its top executive, Nobuaki Kurumatani, a move that comes as the Japanese conglomerate faces a potential buyout and a shareholder-initiated investigation into its management practices.

The board appointed Satoshi Tsunakawa — the current chairman and previous president — to replace Mr. Kurumatani, the company said in a brief statement. It did not explain the reason for the change.

Toshiba, once among the crown jewels of Japanese industry, a maker of products ranging from personal printers to railroad locomotives, has struggled in recent years, overshadowed by the legacy of a major accounting scandal and its acquisition of the American nuclear power company Westinghouse, which declared bankruptcy in 2017.

Seeking to rebuild, Toshiba looked for a new leader from outside its own ranks, and in 2018 it appointed Mr. Kurumatani, an executive with CVC Capital Partners, a private equity company based in Europe, as chief executive. It was an unusual decision for a company that had long been headed by company insiders. Last year, he was appointed president, solidifying his control over the firm.

During a news conference Wednesday, board member Osamu Nagayama deflected questions about the resignation, saying that Mr. Kurumatani, 63, had been considering the move for months and had come to the decision with his family. Unusually, Mr. Kurumatani did not make an appearance, but in a letter that was read aloud to reporters, he said he had chosen to resign after “achieving my mission to rebuild the company.”

The announcement on Wednesday followed months of unrest at Toshiba as disgruntled shareholders agitated for reforms aimed at improving the company’s performance and increasing its value.

Toshiba investors tried to shake up the company’s management at the annual general meeting last summer. But Mr. Kurumatani was re-elected — albeit with less than 60 percent of the vote — following a showdown that angered some key shareholders and raised questions about whether the company had inappropriately interfered in the decision.

Effissimo Capital Management, a Singapore-based hedge fund that holds about 10 percent of the company and had led the campaign to unseat its management team, subsequently called for an investigation into the outcome. Other shareholders agreed, voting, over management’s objections, to begin an independent inquiry in March.

Earlier this month, Toshiba announced that it had received a buyout offer from CVC Capital Partners for a reported $20 billion, a substantial premium on the company’s share price. The offer has raised questions of conflict of interest, as Mr. Kurumatani had previously served as president of CVC’s Japan office.

In recent years, Japanese companies have increasingly been the focus of activist investors from abroad, who believe that sclerotic management and opaque governance practices have prevented many of Japan’s blue chip firms from achieving their full value.

AUSTIN, Texas--(BUSINESS WIRE)--As the first multifamily management company to be recognized in the Public Relations and Marketing Excellence Awards, … END_OF_DOCUMENT_TOKEN_TO_BE_REPLACED

There have been whispers of cooling housing and rental prices in the San Francisco Bay Area, but that hasn't yet translated into practical, noticeable … END_OF_DOCUMENT_TOKEN_TO_BE_REPLACED

Cars pass in Independence Square at twilight in Kyiv, Ukraine, Monday, Oct. 31, 2022. Rolling ... [+] blackouts are increasing across Ukraine as the … END_OF_DOCUMENT_TOKEN_TO_BE_REPLACED