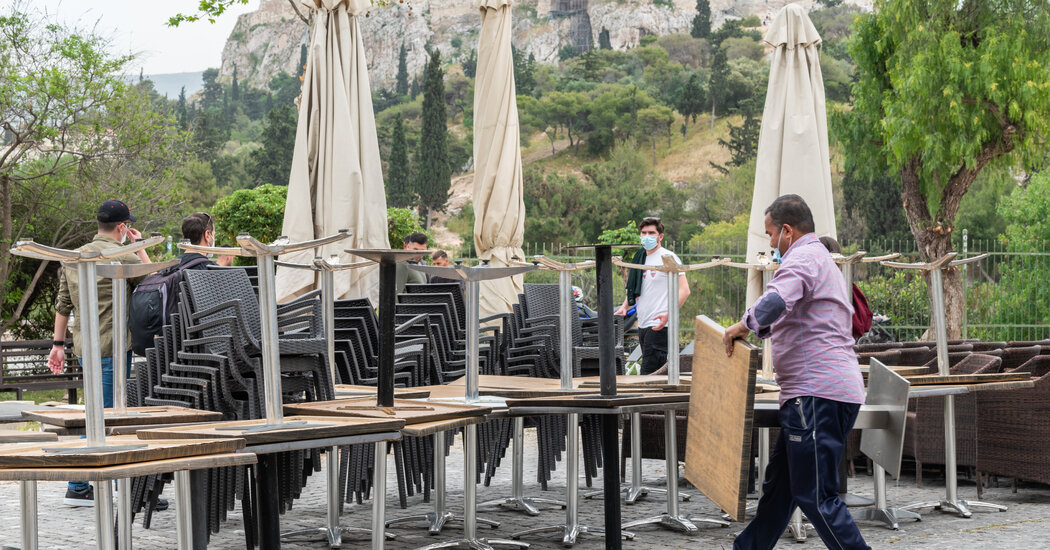 Most Greeks — who have endured months of lockdown — would agree with that sentiment, said Ms. Nakou, the analyst. “I think there is little alternative, to be honest, given the importance of the sector in the economy,” she said.

But Ms. Nakou noted that Covid case numbers rose after the country’s opening to tourists last summer, and that many Greeks associated the arrival of visitors with an increase in the circulation of the virus. She noted that in a survey conducted among Greeks last fall, tourism was the most commonly cited factor in causing the second wave, ahead of people flouting lockdown rules, as well as congestion in public transport or in restaurants.

“I think that is at the back of a lot of people’s minds locally,” said Ms. Nakou. “They’re pleased to see the economy reopening; they’re also quite worried about this.”

In terms of daily new infections, Greece’s worst moment of the pandemic came in early April of this year, when the country was averaging more than 3,000 cases per day; intensive care admissions reached their peak about two weeks later. On a per-capita basis, Greece’s experience pales in comparison to the worst moments of the pandemic in the United States, Britain, France or Italy, but because Greece’s medical system has suffered from years of underfunding, it is particularly vulnerable to strain. The country’s intensive care units were 87 percent full as of April 21, even as lockdown measures were due to be peeled away.

At the same time, vaccination is picking up. Just over 20 percent of the country’s population had received at least one dose of vaccine by the end of April. The coverage is much higher in some of the Greek islands, which were targeted early in the country’s vaccination campaign in part because of their geographical isolation and limited medical facilities. But local leaders also hope that the image of heavily vaccinated, “Covid-free islands” will help to lure tourists back.

“It’s a very important step that guarantees the launch of the tourist season and sends a message of optimism,” Efi Liarou, the mayor of the island Elafonisos, told Agence-France Presse last month.

However many people end up traveling to Greece this summer, it’s clear that this year’s peak tourist season will be unlike any other.

The Seattle Seahawks are very much still in the running for Baker Mayfield. (Photo by Stacy ... [+] Revere/Getty Images) Getty Images The Seattle … END_OF_DOCUMENT_TOKEN_TO_BE_REPLACED

LANSING, Mich. — At least 357 sitting Republican legislators in closely contested battleground states have used the power of their office to discredit … END_OF_DOCUMENT_TOKEN_TO_BE_REPLACED