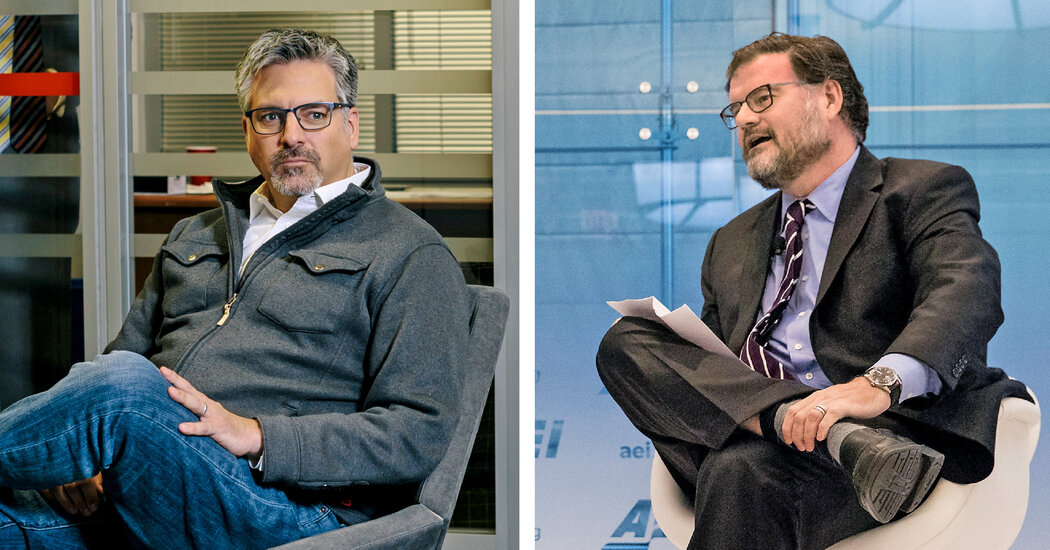 For his part, Mr. Goldberg said he has been thinking about William F. Buckley, the late founder of National Review, who saw as part of his mission “imposing seriousness on conservative arguments” and purging some extreme fringe groups, including the John Birch Society, from the right.

A key issue yet untested. Donald Trump’s power as former president to keep information from his White House secret has become a central issue in the House’s investigation of the Jan. 6 Capitol riot. Amid an attempt by Mr. Trump to keep personal records secret and the indictment of Stephen K. Bannon for contempt of Congress, here’s a breakdown of executive privilege:

Is Steve Bannon covered by executive privilege? This is unclear. Mr. Bannon’s case could raise the novel legal question of whether or how far a claim of executive privilege may extend to communications between a president and an informal adviser outside of the government.

What is contempt of Congress? It is a sanction imposed on people who defy congressional subpoenas. Congress can refer contempt citations to the Justice Department and ask for criminal charges. Mr. Bannon has been indicted on contempt charges for refusing to comply with a subpoena that seeks documents and testimony.

“Whether it’s ‘Patriot Purge’ or anti-vax stuff, I don’t want it in my name, and I want to call it out and criticize it,” Mr. Goldberg said. “I don’t want to feel like I am betraying a trust that I had by being a Fox News contributor. And I also don’t want to be accused of not really pulling the punches. And then this was just an untenable tension for me.”

Now, their views have put them outside the current Republican mainstream, or at least outside what mainstream right-wing institutions and politicians are willing to say out loud. But while in recent years both appeared occasionally on the evening show “Special Report” and on “Fox News Sunday,” which the network classifies as news, it’s been years since they were welcome on Fox’s prime time, and Mr. Goldberg clashed bitterly with the prime-time host Sean Hannity in 2016. (Mr. Hayes and Mr. Goldberg emailed their readers Sunday to announce their departure.)

Despite the former contributors’ hopes, Fox’s programming has hewed to Mr. Trump’s line, as have its personnel moves. The network, for instance, fired the veteran political editor who accurately projected Mr. Biden’s victory in the key state of Arizona on election night, and has hired the former Trump White House press secretary Kayleigh McEnany.

Mr. Hayes and Mr. Goldberg are the first members of Fox’s payroll to resign over “Patriot Purge,” but others have signaled their unhappiness. Geraldo Rivera, a Fox News correspondent since 2001, captured the difficulty of internal dissent at the network when he voiced cautious criticism of Mr. Carlson and “Patriot Purge” to my colleague Michael Grynbaum. “I worry that — and I’m probably going to get in trouble for this — but I’m wondering how much is done to provoke, rather than illuminate,” he said.

On air, two programs with smaller audiences than Mr. Carlson’s scrambled after his special to rebut the false theories presented in “Patriot Purge.” “Special Report” called in a former C.I.A. officer on Oct. 29 to debunk “false flag” theories. And on “Fox News Sunday,” Chris Wallace turned the same question over to one of Mr. Trump’s few foes in the Republican congressional delegation, Representative Liz Cheney of Wyoming.

Mr. Carlson called Mr. Hayes’s and Mr. Goldberg’s resignations “great news” in a telephone interview on Sunday. “Our viewers will be grateful.”

A sign stands outside an upscale home for sale in the Lake Pointe Subdivision of Austin, Texas.Ed Lallo | Bloomberg | Getty ImagesConsumer confidence … END_OF_DOCUMENT_TOKEN_TO_BE_REPLACED

A famous thatch-roof house designed by Earl Young captivated the web and racked up tens of thousands of clicks. Resembling a mushroom, the unusual … END_OF_DOCUMENT_TOKEN_TO_BE_REPLACED