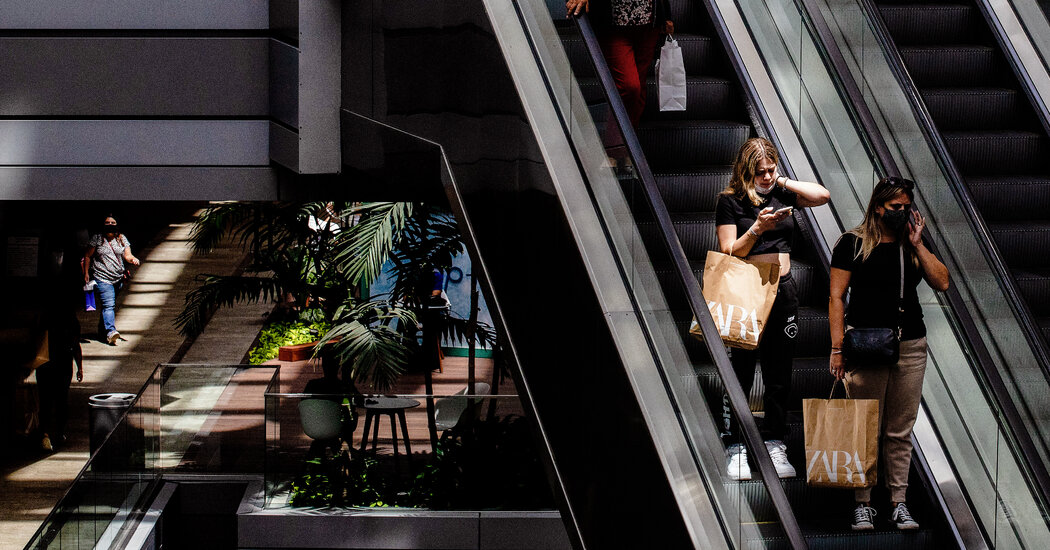 Consumers shook off the pandemic blues as 2021 began, putting stimulus checks to work buying cars and other goods and helping set the stage for what could be the fastest economic growth in decades.

The initial reading on the country’s first-quarter economic performance, delivered Thursday by the Commerce Department, showed that much remained far from normal. Even with a big jump in personal income, there was only a modest increase in spending on services like travel, dining and even health care.

But economists say that is already changing as more vaccinations are delivered and coronavirus-related business restrictions are eased. With better weather, savings accumulated during a long year of lockdowns, and an itch to make up for forced inactivity, Americans will have plenty of reasons to go out and spend.

“Consumers are now back in the driver’s seat when it comes to economic activity, and that’s the way we like it,” said Gregory Daco, chief U.S. economist at Oxford Economics. “A consumer that is feeling confident about the outlook will generally spend more freely.”

the first-quarter growth rate was 6.4 percent.

profit more than tripled last quarter to over $8 billion, while sales jumped 44 percent to $108.5 billion.

One striking aspect of the quarter’s economic activity was spending on motor vehicles and parts, which increased by almost 13 percent from the previous three months. Strong consumer demand and tight inventories drove prices higher.

At AutoNation, the country’s largest dealership chain, many vehicles are being sold near or at sticker price even before they arrive from the factory. “These vehicles are coming in and going right out,” said Mike Jackson, the chief executive.

Even if economic output is back to where it was before last year, as Mr. Daco estimates, it is short of where it would be without the pandemic. What’s more, economists say it is likely to take until sometime next year for employment to regain the ground it lost as a result of the pandemic.

unemployment rate for high school graduates was 6.7 percent in March, while it stands at 3.7 percent for Americans who hold a college degree. Members of minority groups have also suffered heavily, with the jobless rate for Black Americans at 9.6 percent, compared with 5.4 percent for whites.

Tom Gimbel, chief executive of LaSalle Network, a recruiting and staffing firm in Chicago, said: “It’s the best job market I’ve seen in 25 years. We have 50 percent more openings now than we did pre-Covid.”

Hiring is stronger for junior to midlevel positions, he said, with strong demand for professionals in accounting, financing, marketing and sales, among other areas. “Companies are building up their back-office support and supply chains,” he said. “I think we’re good for at least 18 months to two years.”

Ample savings and rising consumer optimism are giving businesses the confidence to bet on the future as well. Business investment rose 2.4 percent in the first quarter and surpassed its prepandemic level. Residential construction spending rose 2.6 percent.

Economic growth would have been even stronger had it not been for a fall in inventories, said Michael Gapen, chief U.S. economist at Barclays. Supply chain constraints and shortages of parts like semiconductors are causing halts in production, he said, most notably in the automobile sector.

That should ease in the months ahead, he added, especially as businesses take their cue from more bullish consumers.

“We’re at the opening stages of what could be a very strong six to nine months for the U.S. economy as it emerges from the pandemic,” he said. “The best is still yet to come.”

Three men were indicted in the death of the notorious gangster James (Whitey) Bulger, who was beaten to death four years ago in a West Virginia … END_OF_DOCUMENT_TOKEN_TO_BE_REPLACED

Dr. Connolly and Dr. Mott live in the North Baltimore neighborhood of Homeland, known for its strong public schools and colonial architecture, which … END_OF_DOCUMENT_TOKEN_TO_BE_REPLACED