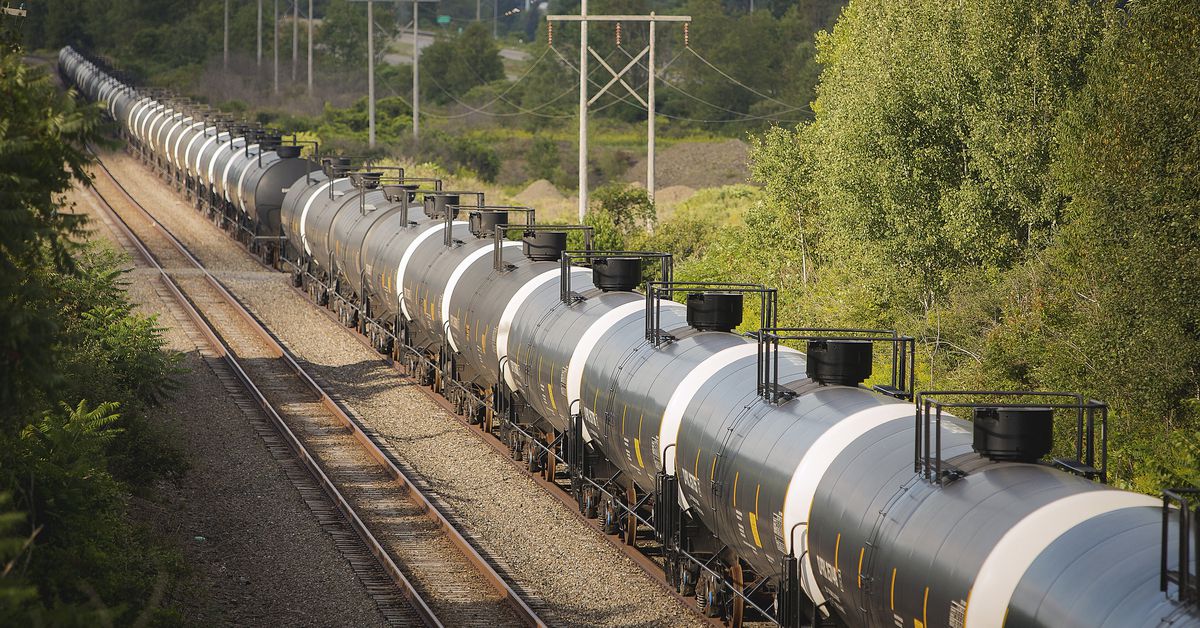 NEW YORK, Sept 14 (Reuters) – Some trains carrying fuel components to the U.S. Northeast have been halted in preparation for a possible railroad shutdown in the coming days, two sources familiar with the situation said on Wednesday.

The northernmost East Coast states rely on railroad shipments to supplement pipeline deliveries from the U.S. Gulf. The region is among the largest fuel consumers in the nation, where U.S. Energy Information Administration (EIA) data shows that in July inventories of heating oil and diesel reached the lowest levels in at least three decades.

Major railroads, including Union Pacific (UNP.N) and Berkshire Hathaway’s (BRKa.N) BNSF, must reach a tentative deal with three unions representing 60,000 workers before 12:01 a.m. on Friday to avert a shutdown.

Unit trains to the Northeast that carry commodities including ethanol and crude oil have already stopped, two sources told Reuters on the condition of anonymity.

All railroads are preparing to wind down operations in the next day, said a spokesperson at Norfolk Southern (NSC.N) who declined to comment further. Passenger rail operator Amtrak has already canceled all long-distance routes nationwide as their trains run largely on freight lines outside of the U.S. Northeast. read more

Nationwide, stocks of distillates, which include heating oil and diesel, are at their lowest levels seasonally since 2000, according to EIA data.

The situation is more dire in New England and the Central Atlantic states. In that region, stretching from Maine to Maryland, stocks are at 16.6 million barrels, lowest seasonally since the EIA started keeping the data in 1990.

Fuel distributors generally have inventories to last several days and those markets can also receive imports, but prices would be expected to rise in anticipation of a possible shortage.

Some shippers, anticipating a shutdown, have already stopped transporting hazardous materials around the United States, including fuel blending components.

“I already have companies that have been limiting their production knowing this was coming and now they’ll have to face the music and shut down,” said Tom Williamson, a railcar broker and owner of Transportation Consultants, which manages over 2,000 railcars.

He said he has been busy the past few days communicating with clients who are starting to shut down production of hazardous materials.

The upper Northeast relies on rail for shipments of crude oil, natural gas and fuel products more than other regions because of a lack of pipelines. New England receives most of the natural gas it uses to heat homes and light stoves by rail, according to consultancy RBN Energy, making it vulnerable to a stoppage.

“Over the past 20 years, regional imbalances between where products are produced and where they are demanded has increased,” said Debnil Chowdhury, vice president, Americas head of refining and marketing, S&P Global Commodity Insights. “This has increased the need to transfer products from the Gulf Coast to the (Northeast).”

Pipelines carrying fuel and natural gas from Texas and other oil and gas-producing states of the U.S. South are already full, Chowdhury said, leaving little room to increase flows on the lines if a shutdown happens.

“All sorts of stuff is going to grind to a halt,” said one executive familiar with the region’s rail operations, who asked not to be named. “It’s going to be brutal.”

In July, governors of New England states wrote a letter to U.S. Secretary of Energy Jennifer Granholm warning her that the region faced surging winter heating bills due to lack of natural gas pipeline connectivity.

They also asked the Biden Administration to suspend the Jones Act, which requires goods moved between U.S. ports to be carried by ships built domestically and staffed by U.S. crew, for the delivery of LNG for at least a portion of the upcoming winter.

In 2021, the six-state New England region got most of its power, or 46%, from natural gas, according to ISO New England, the region’s power grid operator. On the coldest winter days, the grid relies on oil as well to fuel a much bigger percentage of power generation.

“We are starting to see impacts already,” said Chris Ball, chief executive officer of Quantix, a Houston-based company that provides trucks and trailers to transport chemicals for companies including Exxon Mobil, Dow and LyondellBasell.

“They (railroads) have already restricted what they’re taking and so we’re getting a fair amount of trucking orders across our whole network,” Ball said.

Reports on oil and energy, including refineries, markets and renewable fuels. Previously worked at Euromoney Institutional Investor and CNN.

Hometown Deli, Paulsboro, N.J.Mike Calia | CNBCThree men were charged with fraud and other crimes in a scheme involving a company that was worth $100 … END_OF_DOCUMENT_TOKEN_TO_BE_REPLACED

The childhood home of "The Morning Show" actor Nestor Carbonell recently hit the market in Greenwich, CT, for $4.4 million.Fans will appreciate that … END_OF_DOCUMENT_TOKEN_TO_BE_REPLACED