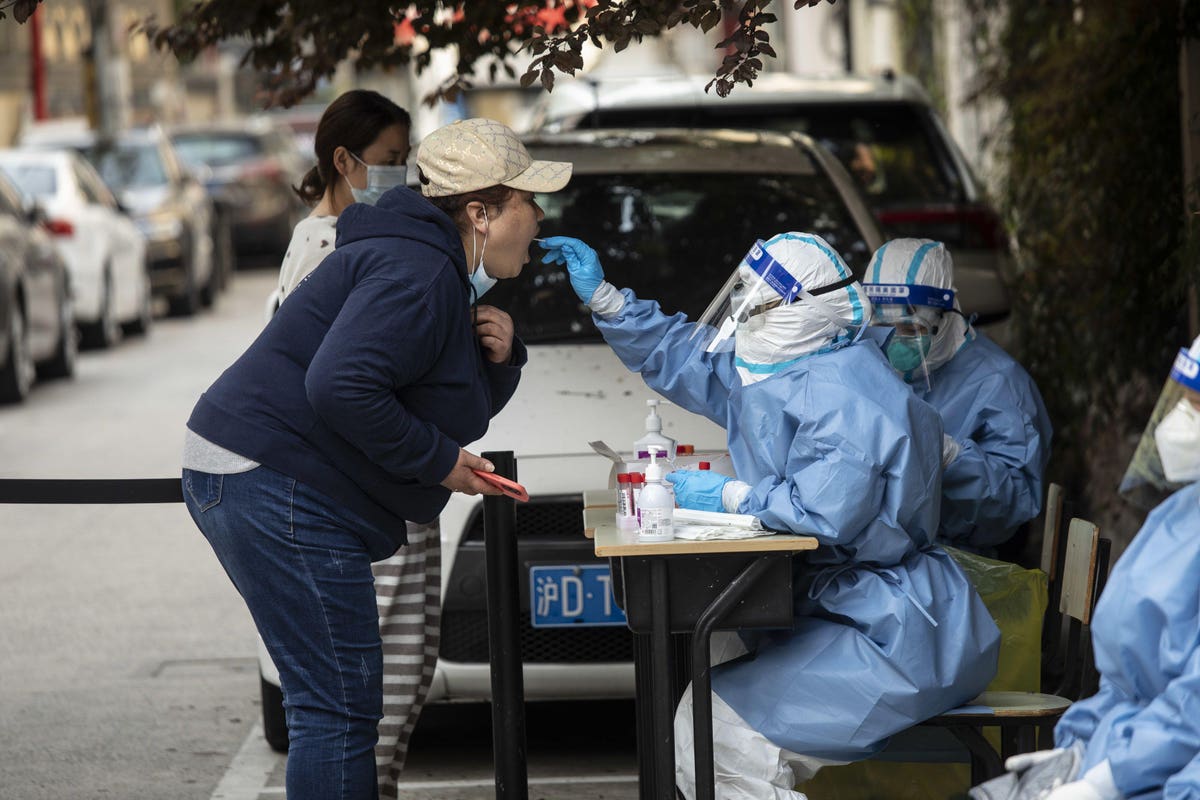 The U.S. State Department on Friday urged Americans to reconsider travel to China due to “arbitrary enforcement of local laws and Covid-19-related restrictions.”

“Do not travel” to Shanghai, Hong Kong and Jilin province and “due to Covid-19-related restrictions, including the risk of parents and children being separated,” a travel advisory posted at the website of the U.S. consulate in Shanghai said. (Click here for the advisory.)

The country reported a total of 25,165 new infections, including symptomatic and asymptotic cases, on Friday, Reuters said. Criticism of food shortages and lengthy lockdowns in connection with the country’s “zero Covid” policies have flooded the country’s social media. Three Shanghai city government health officials have been sacked thus far, AP reported on Friday.

China says it’s necessary to stick with current approach because of risk to its medical system from a wider spread. “With a population of more than 1.4 billion, including a large number of senior citizens, China’s medical system would risk a breakdown and unbearable consequences if the containment measures were not strictly implemented,” Xinhua News Agency said in a report today.

Economic fallout is mounting in China itself, however, where supply chains, investment and staffing are being affected, according to a survey in late March by two American Chamber groups in the country. (See details here.) Fallout from the Covid outbreaks is also likely to put downward pressure on Chinese investment in the U.S. this year, Reva Goujon, senior manager at New York-headquartered Rhodium Group, said in an interview on Thursday. “Investors can’t travel as much as they used to (nor) able to scope out their investments and make deals,” she said. (See details here.)

On Friday, the State Department allowed for the voluntary departure of non-emergency U.S. government employees, and family members of emergency and non-emergency U.S. government workers from the Consulate General Shanghai consular district due to a surge in Covid cases and the impact of restrictions related to the response by China, formally known as the People’s Republic of China.

“The zero-tolerance approach to Covid-19 by the PRC and Hong Kong governments severely impacts travel and access to public services. All travelers should prepare to quarantine at a government-designated location for a minimum of 14 days upon arrival. While in quarantine, health authorities will test travelers as often as daily for Covid-19 and will not permit travelers to leave their rooms. Travelers who test positive during this quarantine time will be transferred to a government-designated medical facility,” the U.S. State Department said.

“Standards of care, accommodations, testing, and treatments may differ considerably from standards in the United States. Even after completing quarantine on-arrival, travelers to the PRC and Hong Kong may face additional quarantines and mandatory testing as well as movement and access restrictions, including access to medical services and public transportation. In some cases, children in Hong Kong who test positive have been separated from their parents and kept in isolation until they meet local hospital discharge requirements,” according to the announcement.

Travelers within the PRC and Hong Kong may be subject to mandatory testing. In areas with confirmed Covid-19 cases, restrictions may include being confined to home or moved to a government- designated quarantine facility or hospital, it said.

The U.S. consulate in Shanghai serves an area that includes the nearby provinces of Zhejiang, Jiangsu, and Anhui, or “East China.” It issues the third-largest number of non-immigrant visas in the world and assists 40,000 U.S. citizen residents and almost 1.5 million U.S. citizens who visit East China every year.

China Covid Outbreaks To Be Followed By Easing In 2nd Half: Matthews Asia

MUSCATINE, Iowa--(BUSINESS WIRE)--HNI Corporation (NYSE: HNI) announced today its Board of Directors declared a quarterly dividend of 32 cents per … END_OF_DOCUMENT_TOKEN_TO_BE_REPLACED

If you’re superstitious, today is your day.That's because it's Friday the 13th (the only one of the year, in fact). It's a day when bad juju reigns … END_OF_DOCUMENT_TOKEN_TO_BE_REPLACED

CHARLOTTE, NORTH CAROLINA - OCTOBER 20: Chris Duarte #3 of the Indiana Pacers defends Gordon Hayward ... [+] #20 of the Charlotte Hornets during their … END_OF_DOCUMENT_TOKEN_TO_BE_REPLACED