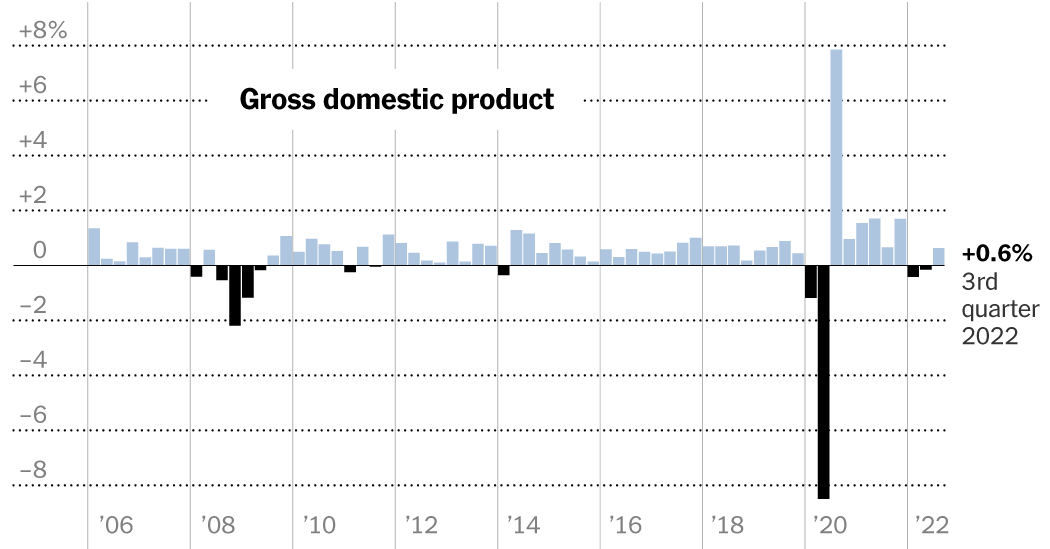 The U.S. economy grew slowly over the summer, adding to fears of a looming recession — but also keeping alive the hope that one might be avoided.

Gross domestic product, adjusted for inflation, returned to growth in the third quarter after two consecutive quarterly contractions, according to government data released Thursday. But consumer spending slowed as inflation ate away at households’ buying power, and the sharp rise in interest rates led to the steepest contraction in the housing sector since the first months of the pandemic.

The report underscored the delicate balance facing the Federal Reserve as it tries to rein in the fastest inflation in four decades. Policymakers have aggressively raised interest rates in recent months — and are expected to do so again at their meeting next week — in an effort to cool off red-hot demand, which they believe has contributed to the rapid increase in prices. But they are trying to do so without snuffing out the recovery entirely.

The third-quarter data — G.D.P. rose 0.6 percent, the Commerce Department said, a 2.6 percent annual rate of growth — suggested that the path to such a “soft landing” remained open, but narrow.

President Biden cheered the report in a statement Thursday morning. “For months, doomsayers have been arguing that the U.S. economy is in a recession, and congressional Republicans have been rooting for a downturn,” he said. “But today we got further evidence that our economic recovery is continuing to power forward.”

By one common definition, the U.S. economy entered a recession when it experienced two straight quarters of shrinking G.D.P. at the start of the year. Officially, however, recessions are determined by a group of researchers at the National Bureau of Economic Research, who look at a broader array of indicators, including employment, income and spending.

Most analysts don’t believe the economy meets that more formal definition, and the third-quarter numbers — which slightly exceeded forecasters’ expectations — provided further evidence that a recession had not yet begun.

But the overall G.D.P. figures were skewed by the international trade component, which often exhibits big swings from one period to the next. Economists tend to focus on less volatile components, which have showed the recovery steadily losing momentum as the year has progressed. One closely watched measure suggested that private-sector demand stalled out almost completely in the third quarter.

Mortgage rates passed 7 percent on Thursday, their highest level since 2002.

“Housing is just the single largest trigger to additional spending, and it’s not there anymore; it’s going in reverse,” said Diane Swonk, chief economist at the accounting firm KPMG. “This has been a stunning turnaround in housing, and when things start to go really quickly, you start to wonder, what are the knock-on effects, what are the spillover effects?”

The third quarter was in some sense a mirror image of the first quarter, when G.D.P. shrank but consumer spending was strong. In both cases, the swings were driven by international trade. Imports, which don’t count toward domestic production figures, soared early this year as the strong economic recovery led Americans to buy more goods from overseas. Exports slumped as the rest of the world recovered more slowly from the pandemic.

Both trends have begun to reverse as American consumers have shifted more of their spending toward services and away from imported goods, and as foreign demand for American-made goods has recovered. Supply-chain disruptions have added to the volatility, leading to big swings in the data from quarter to quarter.

AUSTIN, Texas--(BUSINESS WIRE)--As the first multifamily management company to be recognized in the Public Relations and Marketing Excellence Awards, … END_OF_DOCUMENT_TOKEN_TO_BE_REPLACED

There have been whispers of cooling housing and rental prices in the San Francisco Bay Area, but that hasn't yet translated into practical, noticeable … END_OF_DOCUMENT_TOKEN_TO_BE_REPLACED

Cars pass in Independence Square at twilight in Kyiv, Ukraine, Monday, Oct. 31, 2022. Rolling ... [+] blackouts are increasing across Ukraine as the … END_OF_DOCUMENT_TOKEN_TO_BE_REPLACED