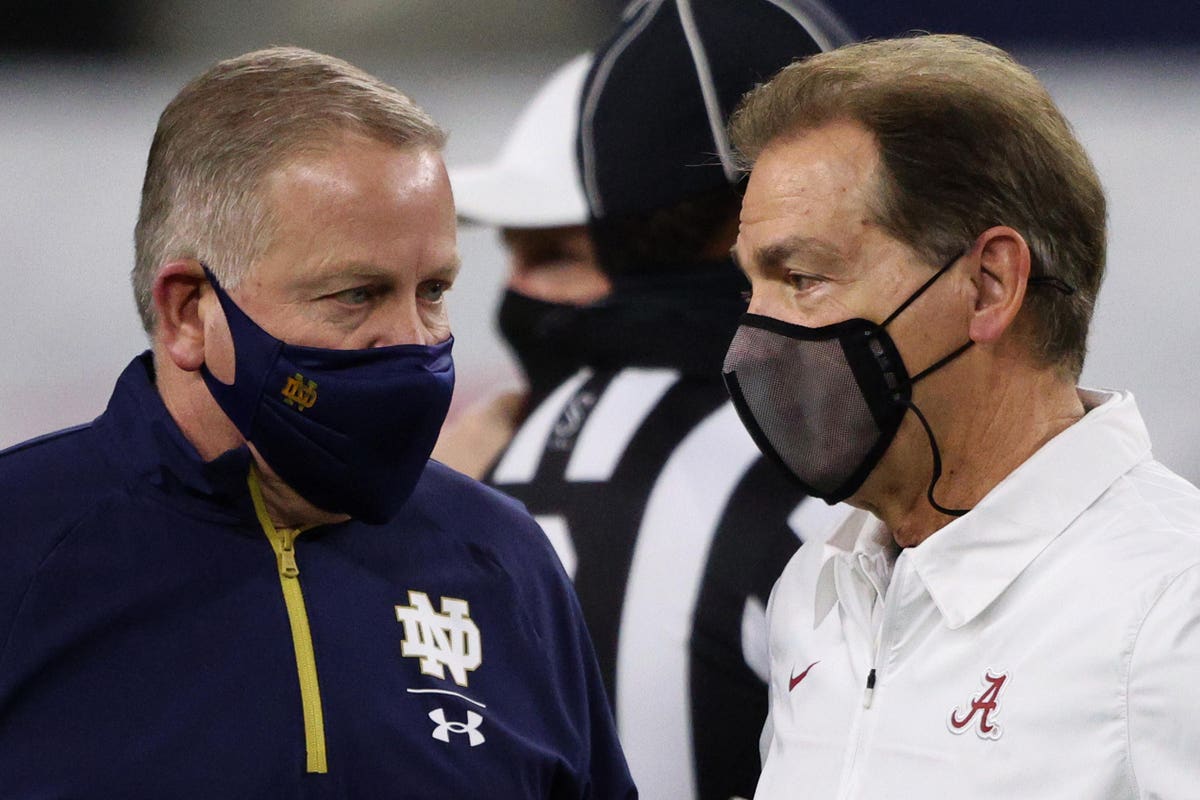 The billboard out on the Indiana Toll Road, a few miles west of Notre Dame’s campus, says it all: Graduating Champions.

A huge image of 12th-year coach Brian Kelly graces that same billboard, his gaze set skyward and to the west.

The graduation rate has never been the problem in South Bend, Ind. It’s the “champions” part that has become a sticking point for an iconic football program that has seen its national championship drought reach 32 seasons and counting.

Yes, two of the past three seasons have ended with trips to the College Football Playoff, but that’s never been sufficient at a place where bronze statues of the national championship coaches — Knute Rockne, Frank Leahy, Ara Parseghian, Dan Devine and Lou Holtz — ring Notre Dame Stadium.

They don’t build statues here for spotless regular seasons. Kelly, who has three of those since 2012, knows that better than anyone.

“It’s not good enough being part of the playoffs, but winning the playoffs,” Kelly said. “More than anything else it’s players understanding that at Notre Dame we’re playing for championships. That’s been our mission: graduating champions. They kind of understand that on a day-to-day basis.”

Drew White, the senior middle linebacker who is one of the team’s seven captains, echoed this idea during fall camp as the Irish prepared for their season opener on the road at Florida State on Sept. 5.

“For me, and what I try to communicate to the rest of the team, we had a great team last year,” White said. “We worked extremely hard. We had some awesome wins. We still came up short. I think that’s a great message to the team.”

Since the start of 2017, Notre Dame has gone 43-8 with four straight 10-win seasons, the longest such streak in program history.  But the Irish couldn’t stay with Clemson when it counted most, in the 2018 semifinal and the 2020 ACC title game, or with Alabama under those same conditions, in either the 2020 national semifinal or the 2012 BCS Championship.

“We have done so many great things these past couple years when we’ve gotten to the playoffs, but it wasn’t enough,” White said. “It’s extra motivation and it’s clarity that we need to continue working harder. What we did last year was not enough. We want to win a national championship. We don’t want to go to the playoffs. That’ s not our goal.”

For Notre Dame it’s all about going from good to great. Or, more correctly, from great to legendary.

How to get there is the question with another season on the horizon.

“Our goal is to graduate champions,” said Bo Bauer, the senior linebacker and special teams maniac. “I’ve had the opportunity to graduate, but I’m not a champion yet. It’s never good enough until that (happens), and then it’s not being complacent in that and continuing to pursue that goal.”

Like so many Notre Dame coaches and players, Bauer has benefited from conversations with Amber Selking, a former Notre Dame soccer player with a Ph.D. from Missouri in sport psychology.

Serving as a mental performance consultant for Notre Dame football since 2017, Selking maintains a regular presence around the program: from warm-ups before practice to the locker room on game days.

“A lot of things start with your mindset,” Bauer said. “She’s taking the time right now to say: It’s great to have workouts and learn the playbook and focus on those things, but she’s trying to develop a dominant mindset. Through those mindsets, it’s able to put you in position to compete at the highest level.”

Notre Dame has been competing at that level for pretty much the last third of Kelly’s reign. Now it’s about finding that last breakthrough that will take his image from that billboard out on the Indiana Toll Road to a statue outside Notre Dame Stadium.

Side tables are among the smallest pieces of furniture, but they make a big difference in the way a room looks.“They’re like the bags and shoes of … END_OF_DOCUMENT_TOKEN_TO_BE_REPLACED

SAN FRANCISCO--(BUSINESS WIRE)--Snapdocs, a leading digital closing platform for the mortgage industry, announced today that its eClosing offering has … END_OF_DOCUMENT_TOKEN_TO_BE_REPLACED