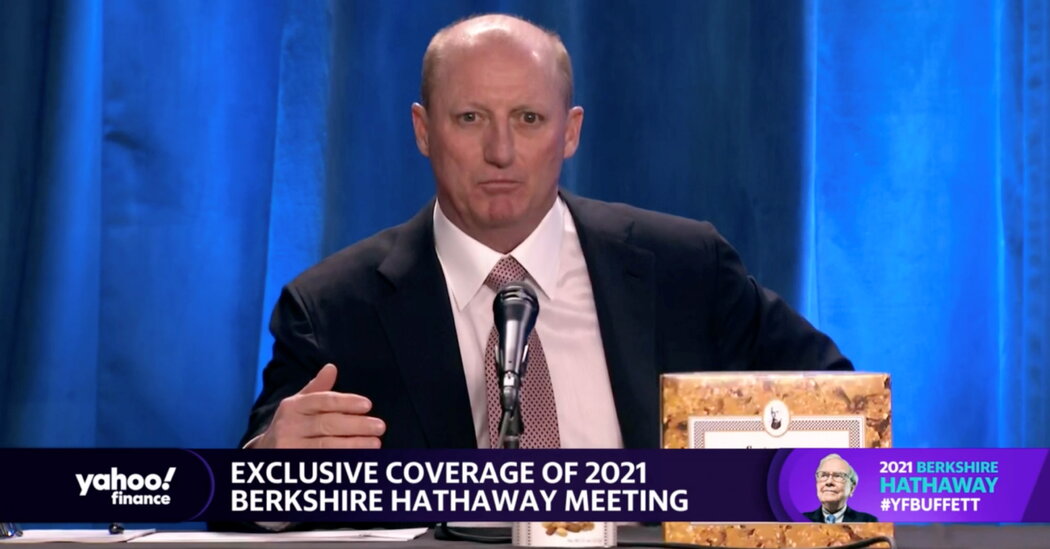 For years, perhaps the biggest question that Warren E. Buffett has faced is who is in line to replace him as chief executive of Berkshire Hathaway, the conglomerate he built into a $631 billion colossus over more than 50 years.

“The directors are in agreement that if something were to happen to me tonight, it would be Greg who’d take over tomorrow morning,” Mr. Buffett, 90, told CNBC in an interview that aired on Monday.

The admission comes at a time of new challenges for Berkshire. At the company’s annual meeting on Saturday, investors questioned lucrative business opportunities Berkshire missed during the pandemic and the company’s reluctance to share information about efforts to combat climate change and increase diversity in its work force.

Mr. Buffett has said for several years that he and his board had been thinking about who would take over when he steps down. Last year, for instance, he wrote in his annual letter to investors, “Berkshire shareholders need not worry: Your company is 100 percent prepared” for his departure.

But that opacity has left corporate-governance experts, and increasingly shareholders, dissatisfied: BlackRock, which owns a 5 percent stake in Berkshire, disclosed this weekend that it had voted against the re-election of the head of Berkshire’s board governance committee in part over “limited disclosure on succession planning.”

For many, the naming of Mr. Abel as Berkshire’s heir apparent confirmed what they had already suspected.

Mr. Abel’s star began rising in 2008 when he was named chief executive of what was then called MidAmerican Energy, a power business that Berkshire bought eight years prior. Mr. Abel helped spearhead a series of acquisitions that turned the division — since renamed Berkshire Hathaway Energy — into one of America’s biggest utility companies.

“We do have a great deal of comfort in Abel,” said James Shanahan, an analyst at Edward Jones. “He’s proved to be a really effective leader of Berkshire Hathaway Energy.”

Mr. Abel was named vice chairman of Berkshire in 2018, alongside Ajit Jain, the longtime head of Mr. Buffett’s vast insurance operations. Analysts and investors widely interpreted the move as signaling that both men were contenders to succeed Mr. Buffett as chief executive one day.

Charles T. Munger, Mr. Buffett’s longtime business partner, hinted at Berkshire’s annual shareholder meeting on Saturday that Mr. Abel might be Berkshire’s next chief. In response to a question about whether the company might become too complex to manage, Mr. Munger said, “Greg will keep the culture” — a task that Mr. Buffett has long stressed would be important for Berkshire’s future leader.

The Seattle Seahawks are very much still in the running for Baker Mayfield. (Photo by Stacy ... [+] Revere/Getty Images) Getty Images The Seattle … END_OF_DOCUMENT_TOKEN_TO_BE_REPLACED

LANSING, Mich. — At least 357 sitting Republican legislators in closely contested battleground states have used the power of their office to discredit … END_OF_DOCUMENT_TOKEN_TO_BE_REPLACED