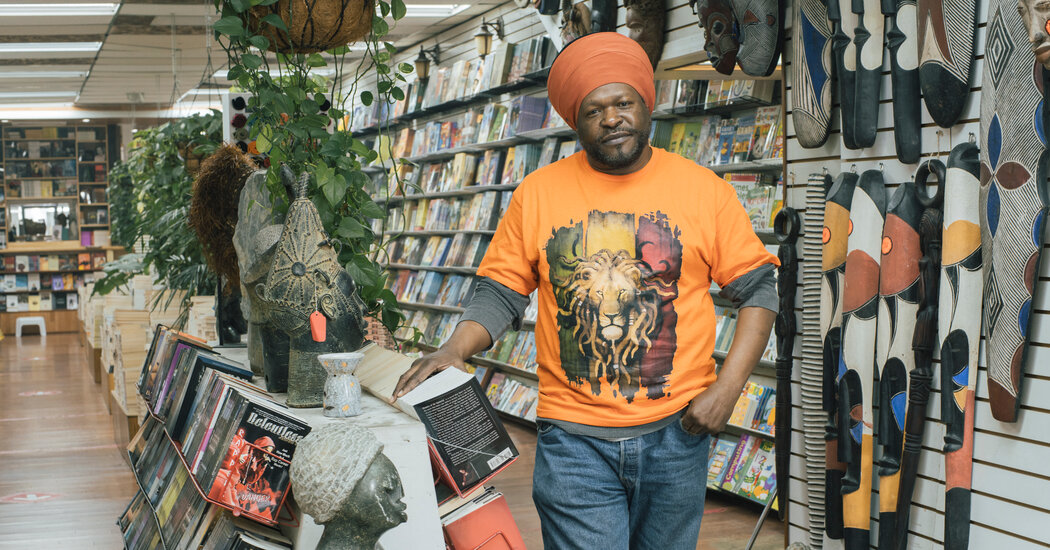 By summer, he closed off half the store and planned an expansion. Sawdust mixed with incense as he knocked down walls, raised the ceiling, transformed an elevator shaft into an office and relocated the cash register from under the stairs. His second-floor tenant, Walm N’Dure, extended the fitness center he runs to the roof, configuring a rock-climbing course replete with netting and a retractable awning.

“It has always been a fight, up and down, a lot of mishaps,” Mr. George said. “Despite all of that we always rise.”

Mr. George never expected to peddle wordsmiths’ wares. Born in Tobago, he grew up going barefoot and sleeping on floors. His grandmother was illiterate and his formal education ended after the fifth grade. At 17, he migrated to East New York with his mother, Brenda, and twin brother, Derrick. It was a hard transition. One morning, Mr. George woke up with a cold and told his mother he was going outside to find herbs in a bush, the place he typically went for natural healing methods, and boil them.

“I have to take you to a drugstore,” she said.

“What is at a drugstore?” he said.

He worked as a welder until suffering a slipped disk in his back. He found purpose in selling books on sidewalks in Manhattan before saving money to open a bookstore across the Hudson. His first shop was on Branford Place, where he developed a reputation as reserved. On payday, Masani Barnwell, a kindergarten teacher in Newark, walked in to buy books for students in her classroom with characters that looked like the children in her classroom. She wanted them to be inspired, and purchased copies of the author Fred Crump’s series, which retell traditional fairy tales with Black characters. She saw a different side of Mr. George.

“He wasn’t that doggone quiet,” she said. “He approached me.”

The poshest place in California's Coachella Valley is The Madison Club. This exclusive gated community in La Quinta is where A-listers and tycoons … END_OF_DOCUMENT_TOKEN_TO_BE_REPLACED

KOROPY, Ukraine — Four men tugged at long strips of fabric to lift a coffin out of the gaping hole in the backyard of a small house. They flung the … END_OF_DOCUMENT_TOKEN_TO_BE_REPLACED