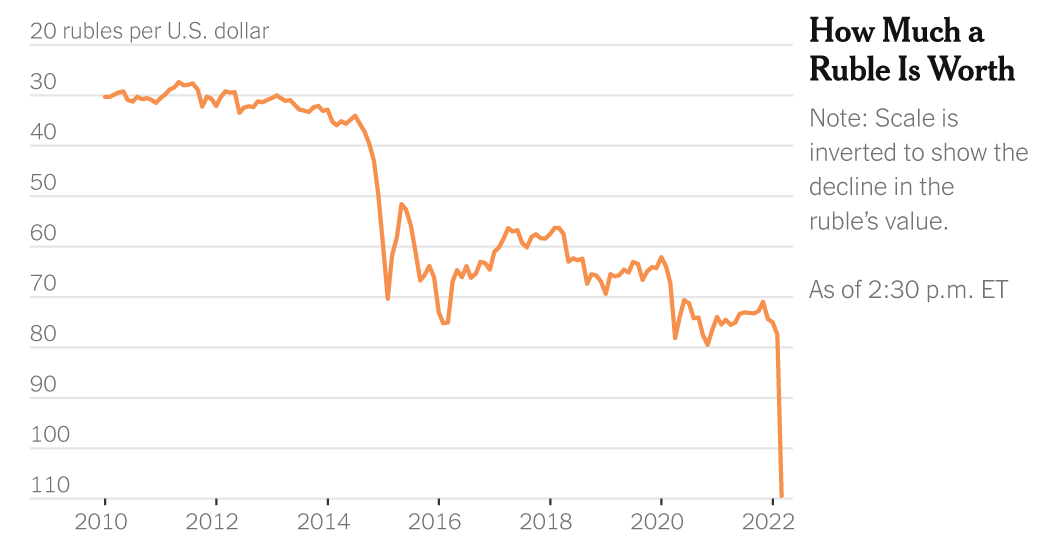 By targeting Russia’s central bank with sanctions, experts said, American and European leaders have taken aim at what could be one of President Vladimir V. Putin’s greatest weaknesses: the country’s currency.

In Russian cities, anxious customers started lining up on Sunday in front of A.T.M.s, hoping to withdraw the money they had deposited in banks, fearful it would run out. The panic spread on Monday. To try to restore calm, the Bank of Russia posted a notice on its website: “The volume of bank notes ready for loading into A.T.M.s is more than sufficient. All customer funds on bank accounts are fully preserved and available for any transactions.”

Even before the sanctions were announced over the weekend, the ruble had weakened. On Monday it plunged further, with the value of a single ruble dropping to less than 1 cent at one point. As the value of any currency drops, more people will want to get rid of it by exchanging it for one that is not losing value — and that, in turn, causes its value to drop further.

In Russia today, as the purchasing power of the ruble drops sharply, consumers who hold it are finding that they can buy less with their money. In real terms, they become poorer. Such economic instability could stoke popular unhappiness and even unrest.

nuclear forces on a higher level of alert. The United States, the European Commission, Britain and Canada agreed to remove some Russian banks from the international system of payments known as SWIFT and to restrict Russia’s central bank from using its storehouse of hundreds of billions of dollars’ worth of international reserves to undermine the sanctions.

Kicking banks out of SWIFT has gotten the most public attention, but the measures taken against the central bank are potentially the most devastating. Ursula von der Leyen, the president of the European Commission, said it would “freeze its transactions” and “make it impossible for the central bank to liquidate its assets.”

On Monday, the U.S. Treasury Department offered more details on how the sanctions would work, saying they would paralyze the Bank of Russia’s assets in the United States and stop Americans from engaging in transactions involving the central bank, Russia’s National Wealth Fund or the Russian Ministry of Finance. As expected, there are exemptions for transactions related to energy exports, on which Europe relies.

But if the allies were to impose a full-fledged freeze of the vast amount of dollars, euros, pounds and yen that are owned by Russia but held in Western banks, it could devastate the Russian economy, causing spiraling inflation and a severe recession.

At the heart of the move to restrict the Bank of Russia are its foreign exchange reserves. These are the vast haul of convertible assets — other nations’ currencies and gold — that Russia has built up, financed in large part through the money it earns selling oil and gas to Europe and other energy importers.

Lenin himself reportedly made more than a century ago, which was repeated by the economist John Maynard Keynes: “There is no subtler, no surer means of overturning the existing basis of society than to debauch the currency.”

The Bank of Russia can try to prop up the value of the ruble by using its reserves to buy up rubles that people are selling. But it can do that only as long as it has access to foreign reserves.

took steps on Monday to restore confidence, and more than doubled interest rates to 20 percent from 9.5 percent in order to offset the rapid depreciation of the ruble. The bank also released an additional $7 billion worth of reserves that had been set aside as collateral for loans and closed down the Moscow stock exchange for the day. Meanwhile, the foreign ministry moved to order companies to sell 80 percent of their foreign currencies, in a bid to gin up demand for rubles and prevent them from stockpiling dollars and euros.

In fact, it was after Mr. Johnson won the high jump that Hitler left the stadium in Berlin, before Mr. Johnson received his medal, even though earlier … END_OF_DOCUMENT_TOKEN_TO_BE_REPLACED

Listed for $2,975,000 at the beginning of the month, this architectural delight in Virginia Beach had its price trimmed by $125,000 last week. Located … END_OF_DOCUMENT_TOKEN_TO_BE_REPLACED