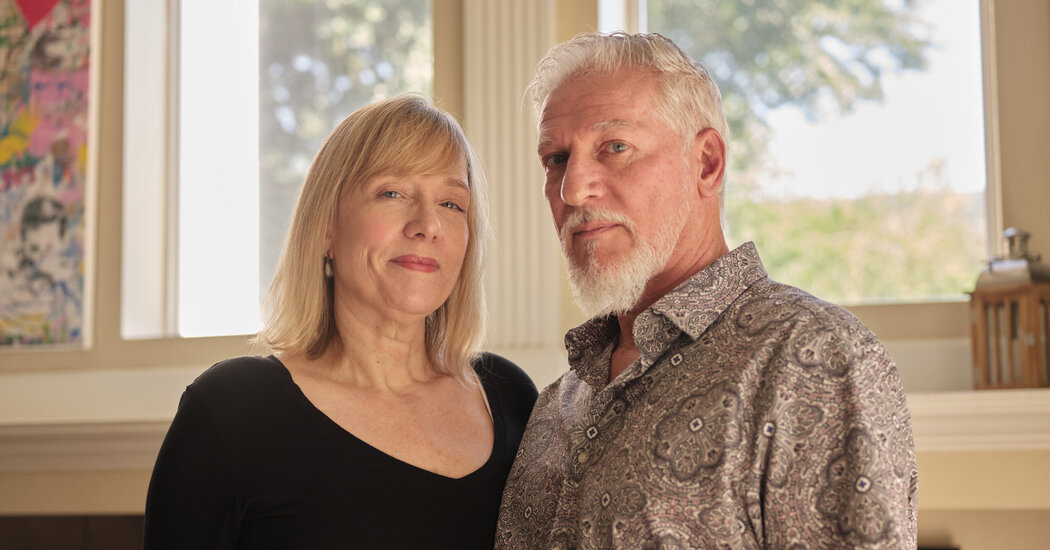 Holly Elgison and Len Schillaci are a mixed vaxxed couple, and they are far from alone.

“I was always going to get the vaccine, 100 percent,” said Ms. Elgison, a medical claims auditor in Valrico, Fla.

Her husband, a disaster insurance adjuster, said he will pass. “To be honest with you, I think that the worst of Covid is behind us,” Mr. Schillaci said. “I’m good.”

As the Biden administration seeks to get 80 percent of adult Americans immunized by summer, the continuing reluctance of men to get a shot could impede that goal.

Women are getting vaccinated at a far higher rate — about 10 percentage points — than men, even though the male-female divide is roughly even in the nation’s overall population. The trend is worrisome to many, especially as vaccination rates have dipped a bit recently.

higher for men than among women. And the division elucidates the reality of women’s disproportionate role in caring for others in American society.

“It could matter to localized herd immunity,” said Alison Buttenheim, an associate professor of nursing at the University of Pennsylvania and expert on vaccine hesitancy. “While most experts are fretting about larger gaps by race, political party, religion and occupational group,” she said, many of which overlap with the gender disparities, “I haven’t heard of any specific initiatives to target men.”

In Los Angeles County, where 44 percent of women over 16 have gotten their first shot — compared with 30 percent of men — officials are scrambling to figure out how to do just that.

“We are very concerned about it and are planning to embark on some targeted outreach among men,” said Dr. Paul Simon, the chief science officer at the Los Angeles County Department of Public Health, who said that the disparities are of particular concern for Black and Latino men. Only 19 percent of Black males in Los Angeles County and 17 percent of Latino males have received at least one dose of the vaccine, compared with 35 percent of Asian men and 32 percent of white men, according to the most recent data available from early this month.

The disparities show both where women do the paid and unpaid labor of life. For instance, women lost the majority of the earliest jobs in food services, retail businesses, health care and government jobs. The mothers among them have done most of the work in the shift to remote schooling and caring for parents and sick relatives.

The combination may have increased their vaccine motivation in two ways: They are seeking to protect the rest of their family and they are desperate to get back in the work force. Indeed, just as women drove the job losses last year, they are leading the economic recovery now; roughly half a million women joined the labor force in March, in part because in-person schooling has resumed across much of the country.

“In addition to women being disproportionately represented in several essential jobs,” said Pilar Gonalons-Pons, an assistant professor of sociology at the University of Pennsylvania who specializes in gender issues, “they are also disproportionately represented as unpaid caregivers for older adults in their families and communities, and this can also be an additional motivation for getting the vaccine.”

In many ways, the pattern with vaccines reflects longstanding gender differences when it comes to preventive health care. Women are on average more likely to get annual physicals than men, even when adjusted for pre-existing health conditions and other factors, and are more likely than men to get preventive care.

less likely to visit doctors regularly and go to the emergency room in a crisis and to get basic dental care, according to federal data. Vaccines are no exception: Historically, influenza vaccination is much higher among females — about 63 percent compared to 53 percent — though the gap narrows in Americans over 75 years old.

But experts say that even in the context of general male health care recalcitrance, there may be some factors that are specific to this vaccine that are preventing more male shots in arms. Because the sign up has been cumbersome and confusing, men may have had less patience in navigating the system, which has largely taken place online, a process that women might find easier since they tend to get more of their health care information online.

“We have to figure out if disparities are about access, if men are having more difficulty navigating the appointment systems,” Mr. Simon of Los Angeles said.

Further, when it comes to the coronavirus — which has been the subject of rampant misinformation, evolving medical advice and politicization — other dynamics may be at work.

“Some men have a sense that they are not necessarily susceptible,” Mr. Simon said health care workers have told officials. “They have weathered this for more than a year and have a sense of omnipotence.”

research on this trait.

“In other words, these cultural ideals lead men to avoid important health care in order to act masculine,” she said. “Now that the vaccine is available to everyone, it will be interesting to watch male-female differences in vaccine uptake, because these will more likely reflect social and cultural ideas about gender and health, such as the cultural idea that ‘real men’ don’t need preventive health care.”

At this stage, U.S. health authorities have not released data on nonbinary adults and vaccination.

There may also be political connections. Women are far more likely than men to register as Democrats, and polls demonstrate that Republicans across the country have been far less likely than Democrats to embrace the vaccine.

So who will men listen to? Not their wives and female friends or doctors, it seems. For their recent preprint study, Leah Witus and Erik Larson, professors at Macalester College in Saint Paul, Minn., watched videos with men and women that featured identical information about the vaccine. Among the 1,184 Americans who watched them, most were positively influenced by the male narrator while the female narrator got a far more mixed response.

This may spell victory for Mr. Schillaci as he and his wife subtly joust for influence over their 20-year-old son’s vaccination decision. Mr. Schillaci has been sharing his views with his son, whom his wife is prodding to take a shot.

“I would rather he got the shot, and I hope that he’ll consider it,” said Ms. Elgison.

But Ms. Elgison’s own decision may benefit her son, even if he decides against the vaccine.

As often happens in life, men may find their gaps covered by women. “To the extent most people live and socialize in a mixed-gender setting, the men will benefit from the higher coverage among women,” Ms. Buttenheim said.

Ms. Elgison, however, still has a trump card she hopes might work. “I would like my son to get it so we can all travel together,” she said. “I explained to him that it’s possible that we could protect his dad.”

Three men were indicted in the death of the notorious gangster James (Whitey) Bulger, who was beaten to death four years ago in a West Virginia … END_OF_DOCUMENT_TOKEN_TO_BE_REPLACED

Dr. Connolly and Dr. Mott live in the North Baltimore neighborhood of Homeland, known for its strong public schools and colonial architecture, which … END_OF_DOCUMENT_TOKEN_TO_BE_REPLACED