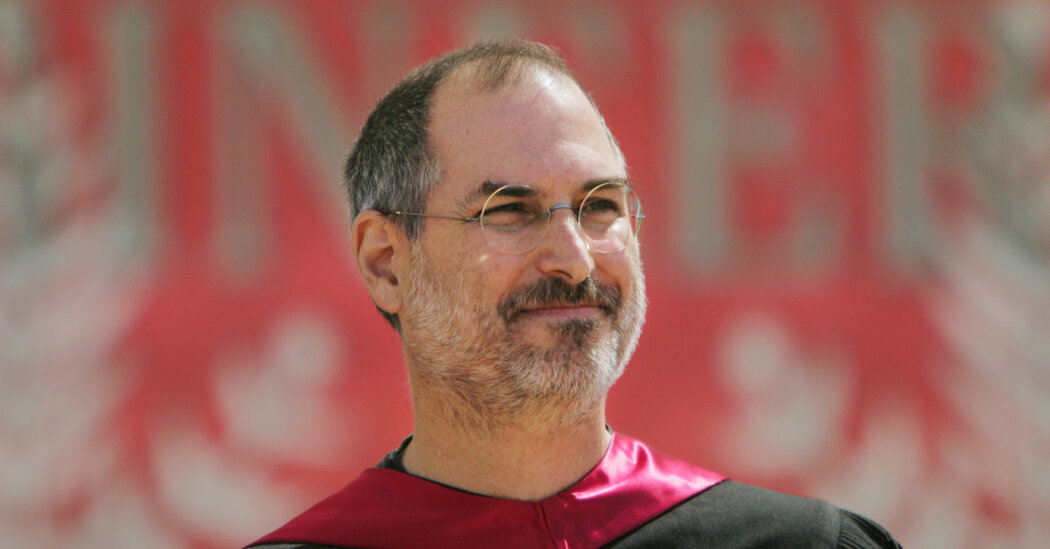 Jacqueline Kennedy Onassis meticulously curated the memory of her husband after he was assassinated, reimagining President John F. Kennedy as a fallen King Arthur in a modern-day Camelot.

Now some historians wonder if Laurene Powell Jobs is also trying to frame the legacy of her late husband, Steve Jobs, a complicated and transformational figure who was shadowed by his flaws as a father and belligerence as a boss.

Last month, Ms. Powell Jobs introduced the Steve Jobs Archive. It aspires to reinvent the personal archive much as Mr. Jobs, in his years running Apple, remade music with the iPod and communication with the iPhone.

Rather than offering up a repository of personal correspondence, notes and items for public research and inquiry, as other influential figures have done, Ms. Powell Jobs, who did not respond to requests for comments, said at a conference last month that the Steve Jobs Archive would be devoted to “ideas.” Those ideas are primarily Mr. Jobs’s philosophies about life and work.

Harvard Business School’s 25 greatest business leaders of the 20th century left behind personal archives that are open to the public in libraries or museums, including Henry Ford, Thomas Edison and Asa Candler, who built Coca-Cola.

Other iconic business founders such as Walt Disney, Sam Walton and Ray Kroc entrusted their papers to the companies they built, allowing those collections to become the cornerstone of corporate archives.

The new Jobs archive debuted with a minimalist website containing eight pieces of video, audio and writing that express what the archive calls Mr. Jobs’s “driving motivations in his own words.” The items, three-quarters of which were already public, can be accessed by clicking through maxims made famous by Mr. Jobs, including “make something wonderful and put it out there” and “pursue different paths.”

The next steps for the archive are shrouded in the kind of mystery associated with the way Mr. Jobs ran Apple. About all that’s been publicly disclosed is that Ms. Powell Jobs hired a documentary filmmaker to gather hundreds of oral histories about Mr. Jobs from former colleagues. Where that material will be stored and who will have access to it has not been revealed.

She married Mr. Jobs in 1991, two years after meeting him as a graduate student at Stanford. Since his death, she has used her estimated $16 billion fortune to fund the Emerson Collective, a philanthropic and commercial operation that owns The Atlantic magazine and funds an organization trying to reduce gun violence in Chicago.

During his life, Mr. Jobs admired and encouraged historians to preserve the history of his Silicon Valley predecessors such as Robert Noyce, who co-founded the chip maker Intel. But he put little value on his own history, and Apple has seldom commemorated product anniversaries, saying it focuses on the future, not the past.

Stanford spent years cataloging items such as photos of a barefoot Mr. Jobs at work, advertising campaigns and an Apple II computer. That material can be reviewed by students and researchers interested in learning more about the company.

Silicon Valley leaders have a tradition of leaving their material with Stanford, which has collections of letters, slides and notes from William Hewlett, who founded Hewlett-Packard, and Andy Grove, the former chief executive of Intel.

Mr. Lowood said that he uses the Silicon Valley archives to teach students about the value of discovery. “Unlike a book, which is the gospel and all true, a mix of materials in a box introduces uncertainty,” he said.

After Mr. Jobs’ death in 2011, Mr. Isaacson, the author, published a biography of Mr. Jobs. Some at Apple complained that the book, a best seller, misrepresented Mr. Jobs and commercialized his death.

Four years later, the book became the basis for a film. The 2015 movie, written by Aaron Sorkin and starring Michael Fassbender, focused on Mr. Jobs being ousted from Apple and denying paternity of his eldest daughter.

according to emails made public after a hack of Sony Pictures, which held rights to the film. She and others who were close to Mr. Jobs thought any movie based on the book would be inaccurate.

“I was outraged, and he was my friend,” said Mike Slade, a marketing executive who worked as an adviser to Mr. Jobs from 1998 to 2004. “I can’t imagine how outraged Laurene was.”

In November 2015, a month after the movie’s release, Ms. Powell Jobs had representatives register the Steve Jobs Archive as a limited liability company in Delaware and California. She later hired the documentary filmmaker, Davis Guggenheim, to gather oral histories about Mr. Jobs from former colleagues and friends. She also hired Ms. Berlin, who was Stanford’s project historian for its Apple archives, to be the Jobs Archive’s executive director.

Mr. Guggenheim gathered material about Mr. Jobs while also working on a Netflix documentary about Bill Gates, “Inside Bill’s Brain.” Mr. Slade, who worked for both Mr. Jobs and Mr. Gates, said he sat for an interview about one executive, stopped to change shirts and returned to discuss the other one.

Ms. Berlin assisted Ms. Powell Jobs in gathering material. They collected items such as audio of interviews done by reporters and early company records, including a 1976 document that Mr. Jobs and Steve Wozniak, Apple’s co-founder, called their declaration of independence. It outlined what the company would stand for, said Regis McKenna, who unearthed the document in his personal collection gathered during his decades as a pioneer of Silicon Valley marketing and adviser to Mr. Jobs.

Apple, which has its own corporate archive and archivist, is a contributor to the Jobs effort, said Ms. Berlin, who declined to say how she works with the company to gain access to material left by Mr. Jobs.

The archive’s resulting website opens with an email that Mr. Jobs sent himself at Apple. It reads like a journal entry, outlining all the things that he depends on others to provide, from the food he eats to the music he enjoys.

“I love and admire my species, living and dead, and am totally dependent on them for my life and well being,” he wrote.

The email is followed by a previously undisclosed audio clip from a 1984 interview that Mr. Jobs did with Michael Moritz, the journalist turned venture capitalist at Sequoia. During it, Mr. Jobs says that refinement comes from mistakes, a platitude that captures how Apple used trial and error to develop devices.

“It was just lying in the drawer gathering dust,” Mr. Moritz said of the recording.

It’s clear to those who have contributed material that the archive is about safeguarding Mr. Jobs’s legacy. It’s a goal that many of them support.

“There’s so much distortion about who Steve was,” Mr. McKenna said. “There needed to be something more factual.”

AUSTIN, Texas--(BUSINESS WIRE)--As the first multifamily management company to be recognized in the Public Relations and Marketing Excellence Awards, … END_OF_DOCUMENT_TOKEN_TO_BE_REPLACED

There have been whispers of cooling housing and rental prices in the San Francisco Bay Area, but that hasn't yet translated into practical, noticeable … END_OF_DOCUMENT_TOKEN_TO_BE_REPLACED

Cars pass in Independence Square at twilight in Kyiv, Ukraine, Monday, Oct. 31, 2022. Rolling ... [+] blackouts are increasing across Ukraine as the … END_OF_DOCUMENT_TOKEN_TO_BE_REPLACED