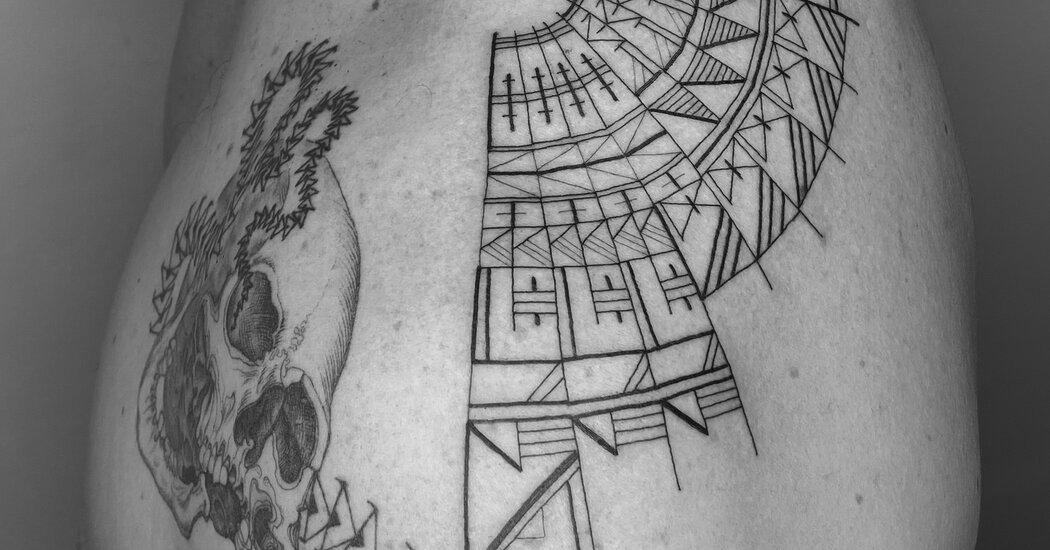 But you can’t hang tattoos in a gallery, or auction them at Sotheby’s. They live and (unless previously removed) die with their owner. It also means that the most in-demand tattoo artists are still paid by the hour, just as many were during their apprenticeships decorating the biceps of sailors and bikers.

Artists do not generally get paid by the hour, said Scott Campbell, 44, a Los Angeles tattoo artist who has inked Robert Downey Jr., Jennifer Aniston and Marc Jacobs. “Musicians don’t get paid by how long it takes them to create a song. You’d never go to a gallery and think, ‘How long did it take the artist to paint it? I’ll pay him for his time.’”

All Our Best, where tattoo artists can offer their designs as permanent, tradable commodities in the form of NFTs.

To refresh: an NFT, which stands for non-fungible token, is basically a digital stamp of authenticity that can be bought, sold or traded like cryptocurrency on a blockchain. This is a far cry from the tattoo world, where the stars of the field see their earnings capped at around $1,000 an hour for a one- to three-hour session, even when working on Hollywood stars.

In this new marketplace, customers will be buying the exclusive rights to the design of the tattoo, rather than the tattoo itself. “I’m selling you an idea, instead of just hours of my life,” said Mr. Campbell, who has been blurring the line between tattoo and fine arts for years, showing his tattoo-inspired sculptures and paintings at galleries and art fairs. “The NFT is basically a digital baseball card.”

As a perk of ownership, buyers get a guaranteed slot with the tattoo artist — no small thing, since top tattoo artists can be nearly impossible to book for those outside the celebrity orbit.

He is not the only tattoo artist to see opportunity in blockchain. An artist in Portland, Me., named Brad Wooten, for example, is selling photos of digitally designed tattoos as NFTs.

The earning potential is considerable. Prices for the initial round of NFT tattoos on All Our Best will range from $1,000 to $10,000. The blockchain technology also allows artists to make a 10 percent royalty every time a work is resold.

Clients also stand to profit if the work appreciates, unlike the current setup where “the only thing they get out of the deal is an Instagram post and some bragging rights,” Mr. Campbell said. “They actually have something that they can keep and pass onto their kids, that has a life beyond being just that thing on their arm that in 10 years is going to be sunburned and blurry anyway.”

When you think of Oscar winner Sandra Bullock, the first words that come to mind are probably not "organic farmer."But that's one of the many things … END_OF_DOCUMENT_TOKEN_TO_BE_REPLACED