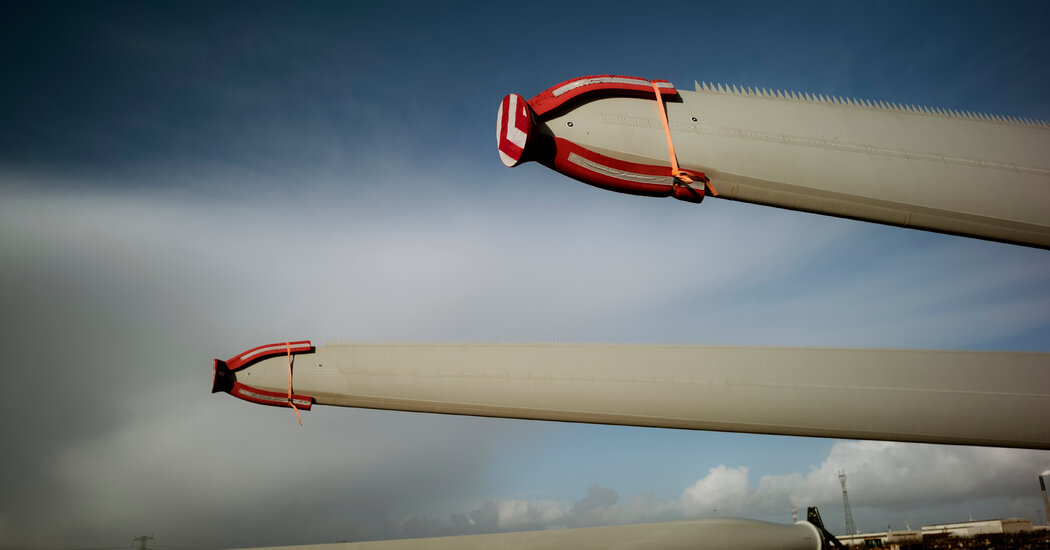 At the Siemens Gamesa factory in Aalborg, Denmark, where the next generation of offshore wind turbines is being built, workers are on their hands and knees inside a shallow, canoe-shaped pod that stretches the length of a football field. It is a mold used to produce one half of a single propeller blade. Guided by laser markings, the crew is lining the sides with panels of balsa wood.

The gargantuan blades offer a glimpse of the energy future that Europe is racing toward with sudden urgency. The invasion of Ukraine by Russia — the European Union’s largest supplier of natural gas and oil — has spurred governments to accelerate plans to reduce their dependence on climate-changing fossil fuels. Armed conflict has prompted policymaking pledges that the more distant threat of an uninhabitable planet has not.

Smoothly managing Europe’s energy switch was always going to be difficult. Now, as economies stagger back from the second year of the pandemic, Russia’s attack on Ukraine grinds on and energy prices soar, the painful trade-offs have crystallized like never before.

Moving investments away from oil, gas and coal to sustainable sources like wind and solar, limiting and taxing carbon emissions, and building a new energy infrastructure to transmit electricity are crucial to weaning Europe off fossil fuels. But they are all likely to raise costs during the transition, an extremely difficult pill for the public and politicians to swallow.

proposed a carbon tax on imports from carbon-producing sectors like steel and cement.

And it has led the way in generating wind power, especially from ocean-based turbines. Siemens Gamesa Renewable Energy, for example, has been instrumental in planting rows of colossal whirligigs at sea that can generate enough green energy to light up cities.

Europe, too, is on the verge of investing billions in hydrogen, potentially the multipurpose clean fuel of the future, which might be generated by wind turbines.

halted approval of Nord Stream 2, an $11 billion gas pipeline under the Baltic Sea that directly links Russia to northeastern Germany.

As Ursula von der Leyen, the European Commission president, said when she announced a plan on March 8 to make Europe independent of Russian fossil fuels: “We simply cannot rely on a supplier who explicitly threatens us.” The proposal calls for member nations to reduce Russian natural gas imports by two-thirds by next winter and to end them altogether by 2027 — a very tall order.

This week, European Union leaders are again meeting to discuss the next phase of proposals, but deep divisions remain over how to manage the current price increases amid anxieties that Europe could face a double whammy of inflation and recession.

price of palladium, used in automotive exhaust systems and mobile phones, has been soaring amid fears that Russia, the world’s largest exporter of the metal, could be cut off from global markets. The price of nickel, another key Russian export, has also been rising.

Mr. Rasmussen and other executives added that identifying suitable areas for wind turbines and obtaining permits required for construction take “far too long.” Challenges are based on worries that the vast arrays of turbines will interfere with fishing, obstruct naval exercises and blight views from summer houses.

To Kadri Simson, Europe’s commissioner for energy, renewable energy projects should be treated as an “overriding public interest,” and Europe should consider changing laws to facilitate them.

“We cannot talk about a renewables revolution if getting a permit for a wind farm takes seven years,” Ms. Simson said.

Still, environmental regulations and other rules relating to large infrastructure installations are usually the province of countries rather than European Union officials in Brussels.

And steadfast opposition from communities and industries invested in fossil fuels make it hard for political leaders to fast-track energy transition policies.

In Upper Silesia, Poland’s coal basin, bright yellow buses display signs that boast they run on 100 percent electric, courtesy of a grant from the European Union. But along the road, large billboards mounted before the invasion of Ukraine by state-owned utilities — erroneously — blame Brussels for 60 percent of the rise in energy prices.

Down in the Wujek coal mine, veterans worry if their jobs will last long enough for them to log the 25 years needed to retire with a lifelong pension. Closing mines not only threatens to devastate the economy, several miners said, but also a way of life built on generations of coal mining.

“Pushing through the climate policy forcefully may lead to a drastic decrease in the standard of living here,” said Mr. Kolorz at Solidarity’s headquarters in Katowice. “And when people do not have something to put on the plate, they can turn to extreme populism.”

Climate pressures are pushing at least some governments to consider steps they might not have before.

German officials have determined that it is too costly to keep the country’s last three remaining nuclear power generators online past the end of the year. But the quest for energy with lower emissions is leading to a revival of nuclear energy elsewhere.

Britain and France say they plan to invest in smaller nuclear reactors that can be produced in larger numbers to bring down costs.

Britain might even build a series of small nuclear fusion reactors, a promising but still unproven technology. Ian Chapman, chief executive of the U.K. Atomic Energy Authority, said every route to clean energy must be tried if there is to be any hope of reaching net zero emissions in three decades, the deadline for avoiding catastrophic climate change. “We’ve got to do everything we possibly can,” he said.

In the short term, much of what the European Union is proposing involves switching the source of fossil fuels, and, in particular, natural gas, from Russia to other suppliers like the United States, Qatar and Azerbaijan, and filling up storage facilities as a buffer. The risk is that Europe’s actions will further raise prices, which are already about five times higher than a year ago, in a market where supplies are short in part because companies are wary of investing in a fuel that the world ultimately wants to phase out.

Over the longer term, Europe and Britain seem likely to accelerate their world-leading rollout in renewable energy and other efforts to cut emissions despite the enormous costs and intense disruptions.

“The E.U. will almost certainly throw hundreds of billions of euros at this,” said Henning Gloystein, a director for energy and climate at Eurasia Group, a political risk firm. “Once the trains have left the station, they can’t be reversed.”

SEATTLE--(BUSINESS WIRE)--(NASDAQ: RDFN) —The housing market turned a corner in April as the inventory crunch showed signs of easing, according to a … END_OF_DOCUMENT_TOKEN_TO_BE_REPLACED

We present a chance to live like Rocky Mountain royalty right in the heart of Denver. “You don't see a lot of castles in the middle of Denver—and this … END_OF_DOCUMENT_TOKEN_TO_BE_REPLACED