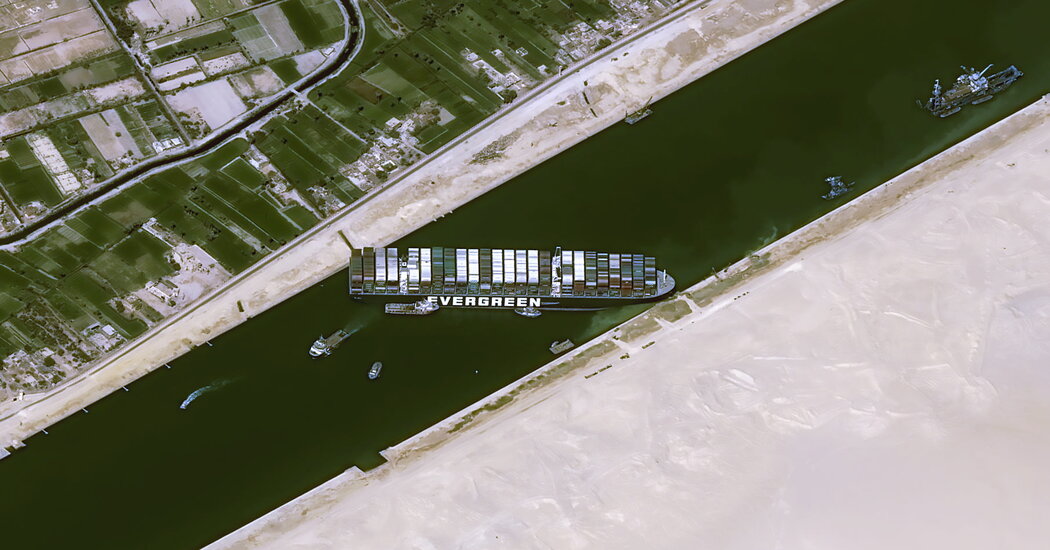 As the world absorbed the reality that the Suez Canal will almost certainly remain blocked for at least several more days, hundreds of ships stuck at both ends of the channel on Friday began contemplating a far more expensive alternative: forsaking the channel and heading the long way around Africa.

A journey from the Suez Canal in Egypt to Rotterdam, in the Netherlands — Europe’s largest port — typically takes about 11 days. Venturing south around Africa’s Cape of Good Hope adds at least 26 more days, according to Refinitiv, the financial data company.

The additional fuel charges for the journey generally run more than $30,000 per day, depending on the vessel, or more than $800,000 total for the longer trip. But the other option is sitting at the entrance of the canal and waiting for the mother of all floating traffic jams to dissipate, while incurring so-called demurrage charges — late fees for cargo — that range from $15,000 to $30,000 per day.

“You are either stuck with the commodity and waiting for things to evolve, or you take the cost and you move your commodity, and you free up your ship,” said Amrit Singh, lead shipping analyst at Refinitiv in London. “People have started making decisions.”

surge of orders spurred by the pandemic.

A world whose initial experience with the coronavirus featured the hoarding of toilet paper now braces for fresh shortages of that vital commodity. Like many consumer goods, paper products are transported through the Suez Canal in giant shipping containers.

More than 200 ships are now stuck at either end of the Suez Canal, with no clarity on when they will be able to continue their journeys. Some 80 additional ships are scheduled to arrive over the next three days, Mr. Singh said.

For ships that had been on their way to Europe from Asia and are stuck at the southern end of the canal, the route around Africa involves crossing through an area off Somalia that is rife with piracy. Some ships are carrying security teams that enable them to pass through the piracy zone. Those that lack guards must detour around it, adding three more days to their journeys.

Crews may be unfamiliar with the waters around Africa’s southern tip, where the convergence of warm and cool currents produces turbulent and unpredictable conditions. Early Portuguese navigators called this region “the cape of storms.”

These are the sorts of factors that shipping companies are now considering.

“It is like choosing the queue at the post office,” said Alex Booth, head of research at Kpler. “It is never the right decision.”

Already, seven giant carriers of liquefied natural gas appear to have decided to change course away from the canal, according to Kpler.

One of these ships, chartered by Royal Dutch Shell, had picked up a cargo of gas at Sabine Pass in Texas and was heading toward the canal when it made a sharp turn in the Atlantic Ocean toward Africa. Another, operated by Qatargas, a state energy company, and loaded at Ras Laffan, the Qatar energy hub, was headed for Suez but then veered away toward the Cape of Good Hope before reaching the Red Sea.

Container ships are also changing their plans. HMM, a South Korean shipping company, ordered one of its vessels that was headed to Asia from Britain via the canal to go around Africa instead, according to NOH Ji-hwan, a spokesman for the company.

Mr. Booth said a ship that was already waiting at the canal would be unlikely to backtrack all the way around Africa. That would mean a nearly six-week journey to reach Amsterdam compared with just 13 days from the canal.

If the call is made in the early part of a journey, though, it may make sense. For instance, Kpler estimates that a trip around the cape from the Saudi oil terminal Ras Tanura would require 39 days, versus 24 days by way of Suez.

Ultimately, the decision hinges on an assessment of the time required for engineers to extract the Ever Given, allowing traffic to resume. The most optimistic outlook took a hit on Friday, with the failure of the latest effort to get the enormous ship floating.

“People are saying that something will be done by Sunday,” said Mr. Singh of Refinitiv. “But I have my little doubts. The tide and nautical conditions are more favorable toward the middle of next week.”

In the grand sweep of world history, the U.S. is a young country. Even so, there are plenty of homes built prior to the American Revolution that still … END_OF_DOCUMENT_TOKEN_TO_BE_REPLACED

DONETSK REGION, Ukraine — Between the cracks of mortar fire and the metallic bangs of Russian self-detonating mines, Yurii, a Ukrainian Army medic, … END_OF_DOCUMENT_TOKEN_TO_BE_REPLACED