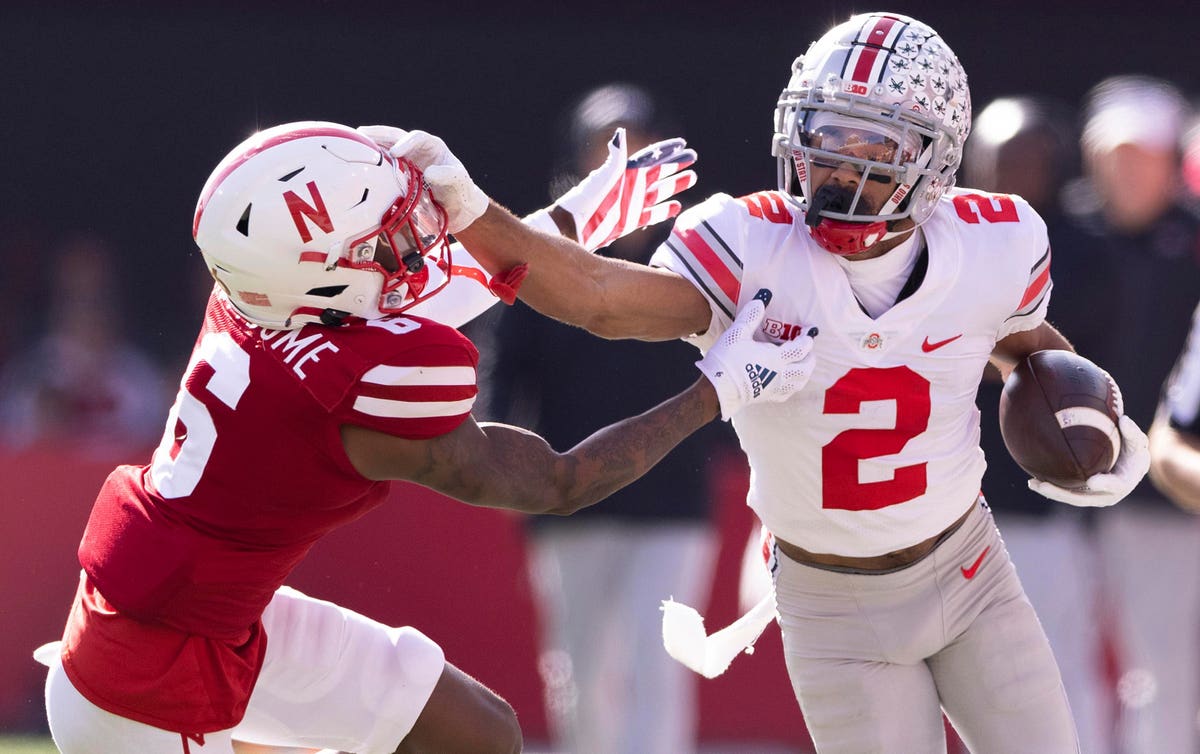 Chris Olave was a diamond in the rough when he arrived at Ohio State back in the fall of 2018.

At a school packed with 4- and 5-star recruits, Olave came to OSU as just a 3-star prospect.

Olave was all of these and more when he left he left his hometown of San Ysidro, Calif., for Columbus.

Today, he’s the ultimate overachiever, the Buckeyes’ all-time leader in touchdown receptions and a certain first-round draft pick. And by late Thursday night, he should be the newest Green Bay Packer.

By the time the Packers select at No. 22, Olave will be as good as gone. But don’t be surprised to see Green Bay general manager Brian Gutekunst trade up as many as 10 spots to land Olave and give his hideous wide receiver room an immediate boost.

“Green Bay might have to get in that (No.) 12 to 15 range for Olave,” one scout told me Wednesday. “He’ll never be there at (No.) 22. But they’ve got a lot of picks (11) and he could wind up being the best of these wideouts. So if the Packers think highly of him, why the hell not move up and try getting him?”

Only Gutekunst and his people know how they rank this year’s class of wideouts. But it wouldn’t be a surprise if Olave sat at or near the top of their wide receiver board.

Olave ranked among the national leaders in receptions (50) and yards (726) in the COVID-shortened 2020 season when he helped Ohio State reach the national championship game. Many expected Olave to turn pro after his junior season, but he opted to return to Columbus and had a monster senior season with 65 receptions for 936 yards and 13 touchdowns.

“He was a touchdown machine at Ohio State,” ESPN draft analyst Mel Kiper Jr. said. “He’s a player who looks better and better when you watch all of his snaps in a game, because even if he didn’t catch 10 passes, he was always open.”

The Packers are desperate for speed, and Olave ran the 40-yard dash in a blazing 4.39 seconds at the NFL Combine. He was also one of college football’s most refined route-runners last year, making him a potential candidate to become the Packers’ No. 1 wideout almost immediately.

Olave’s short-area quickness and explosion are unique. His releases, route running and ball skills are also impressive and he can create space on all three levels.

Olave also posted a Relative Athletic Score of 8.69, which was better than all the other top wideouts including Wilson, London and Williams.

The biggest knock on Olave is his size. At 6-foot ½-inch and 185 pounds, Olave lacks the length and physicality to be a dominant receiver in traffic.

But Olave is as tough as an old catcher’s mitt. In fact when he showed up at OSU, he covered kickoffs and was on the front line on kick returns.

“He’s a fun player to study,” said Daniel Jeremiah of the NFL Network. “I think the reason why you see him married with so many different teams in all these mock drafts is that he fits. He’s a silky-smooth route runner who can do so many different things. He tracks the ball really, really well. He’s incredibly smart.

“Their coaches down there rave about him. They love him. He just needs to get a little bit stronger. That’s kind of the one knock on Chris. But he’s been doing it since he got there. He’s always found a way to make plays.”

If Olave is indeed the apple of Gutekunst’s eye, the tricky part becomes moving up the draft board to land him.

While this draft has several first round talents, there isn’t a Calvin Johnson or Ja’Marr Chase-type of player likely to go in the first five picks. In fact, don’t be shocked if the draft gets to pick No. 10 before a receiver is selected.

But then the run on wideouts is expected to begin. And it could be wild.

The New York Jets hold pick No. 10 and need a wideout for young quarterback Zach Wilson. The same goes for Washington at No. 11, Houston at 13 and Baltimore at 14.

Philadelphia needs a receiver and holds picks No. 15 and 18. The New Orleans Saints need wideouts, too, and have picks No. 16 and 19.

Somewhere in that mess, Gutekunst must navigate the waters and find a trading partner if he wants Olave bad enough. That’s because if Gutekunst patiently waits during this game of musical chairs, he’ll wind up without a seat.

“If the Packers want one of those top three or four guys, they’ve got to be aggressive,” the scout said. “Those top guys aren’t falling to Green Bay at 22. Look at all those teams in the middle. They all need receivers.”

But probably not as badly as Green Bay does.

By bringing back quarterback Aaron Rodgers for an 18th season, the Packers are in a “win now” mode. But the current group of receivers doesn’t exactly scream championship.

The Packers’ top four wideouts rank among the worst in football. Sammy Watkins and Randall Cobb are past their prime. Allen Lazard is slow. And Amari Rodgers was awful as a rookie.

Add to it Aaron Rodgers turns 39 this season and has been the NFL’s biggest playoff flop since leading the Packers to a Super Bowl 12 seasons ago.

So the passing game needs help. Lots of it. And by the time the draft ends, Gutekunst could add as many as three new bodies to his wide receiver room.

The first one, though, should be Olave who has the potential to contribute immediately and eventually become the best player from this incredibly gifted group of receivers.

He has been. That’s what overachievers do.

Now, the Packers must be prepared to go and get Olave Thursday night.

If you’re superstitious, today is your day.That's because it's Friday the 13th (the only one of the year, in fact). It's a day when bad juju reigns … END_OF_DOCUMENT_TOKEN_TO_BE_REPLACED

CHARLOTTE, NORTH CAROLINA - OCTOBER 20: Chris Duarte #3 of the Indiana Pacers defends Gordon Hayward ... [+] #20 of the Charlotte Hornets during their … END_OF_DOCUMENT_TOKEN_TO_BE_REPLACED

Army vehicles were so decrepit that repair crews were stationed roughly every 15 miles. Some officers were so out of shape that the military budgeted … END_OF_DOCUMENT_TOKEN_TO_BE_REPLACED