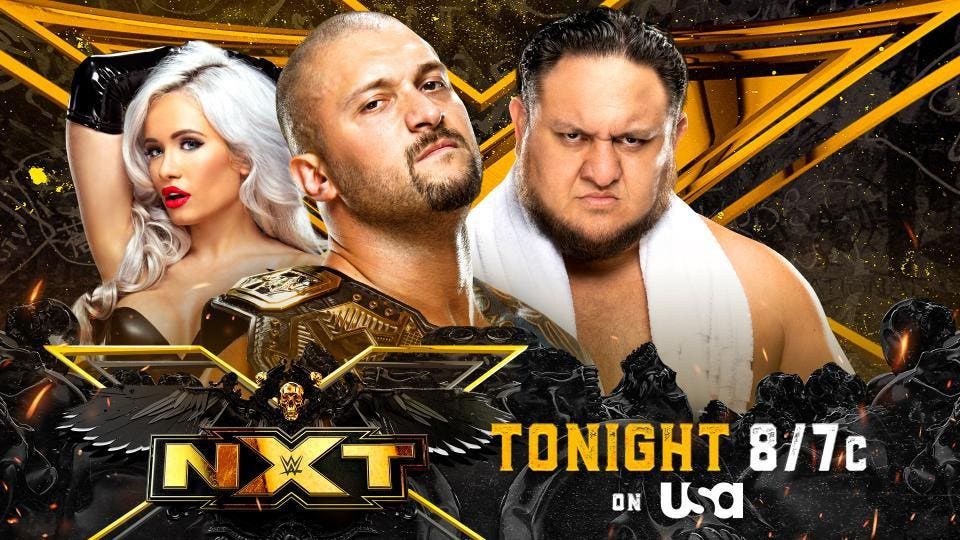 NXT also advertised MSK vs. Imperium, Carmelo Hayes vs. Duke Hudson in the semifinals of the NXT Breakout Tournament and Dexter Lumis and Indi Hartwell vs. Robert Stone and Jessi Kamea.

Last week’s broadcast of WWE NXT was up significantly after back-to-back historic lows due to being moved to SyFy. NXT’s viewership may have also been bolstered by interest coming out of last week’s shocking releases where WWE released 13 NXT talents including Bronson Reed and Mercedes Martinez. NXT’s ratings momentum is set to be stifled yet again as NXT episodes are set to be taped yet again next week, reportedly much to the chagrin of the USA Network.

After Ilja Dragunov’s loss last week and Kushida being unable to get medically cleared, this was nothing more than wrestlers wrestling for the sake of wrestling.

I don’t know if this rule applies in NXT, but Kushida is coming up on 30 days without defending the NXT Cruiserweight Championship.

Santos Escobar interrupted Swerve Scott just as he was about to explain to the NXT audience what “on sight” means.

Santos Escobar challenged Swerve Scott to a parking lot brawl and promised his goons wouldn’t be there. Miraculously, Hit Row believed this heel and let their man go to the parking lot all by himself, only for him to be jumped by Legado Del Fantasma.

For all these fans fearful that big men were going to overtake NXT, tonight was yet another show filled with smaller guys beating guys far bigger than them.

Ted DiBiase won $20,000 after betting L.A. Knight that Cameron Grimes would win, as if the Million-Dollar Man needed the money.

Robert Stone took accessorizing to the next level with a fake ponytail.

Indi Hartwell now wears gloves as part of her ring gear and even checked out Dexter Lumis’ butt during their stone-faced entrance.

I just realized Franky Monet’s relationship with Robert Stone is similar to that of John E. Bravo in IMPACT.

Though he’s much leaner than he was when he was Robbie E., but Robert Stone continues to maintain an impressive physique.

Indi Hartwell proposed to Dexter Lumis, and with NXT’s roster being gutted on its way to pre-tapes, a TV wedding can’t come fast enough.

After supplying Indi Hartwell with an eyeball engagement ring, Beth Phoenix has to be the favorite to be Indi Hartwell’s Maid of Honor.

Raquel Gonzalez brought up some great points about Dakota Kai’s history of turning on her best friends the way she did against Tegan Nox.

Fans surprisingly seemed to be behind Dakota Kai by the end of his backstage faceoff.

I was shocked Carmelo Haye beat Duke Hudson, and will now be on his way to a finals match against Odyssey Jones. I’m here for it.

Nash Carter took a very scary bump on his head in the corner but was thankfully okay.

Poor Ilja Dragunov jumped WALTER from behind twice and still got beat up by WALTER.

I would be flat-out shocked if Iljua Dragunov beats WALTER this Sunday, but at least they’ll get to chop the hell out of one another for my viewing pleasure.

There were “where is Scarlett” chants that seemed to throw off Karrion Kross a bit.

Karrion Kross owed to drop Samoa Joe, only to promptly get dropped by Samoa JOe, but the ensuing brawl was entertaining as they literally took down the plexiglass in the CWC.

The Mississippi River town of Ste. Genevieve, MO, might be the ideal spot for a buyer in search of a refreshing idea.This mixed-use structure on the … END_OF_DOCUMENT_TOKEN_TO_BE_REPLACED

More From ForbesJan 26, 2022,09:00am ESTCompany Named For Jetsons Son Unveils Autonomous Cargo EVTOL Drone Of The Near … END_OF_DOCUMENT_TOKEN_TO_BE_REPLACED

The prison in Hasaka where thousands of Islamic State fighters are held, in 2019.Credit...Ivor Prickett for The New York TimesThe prison at the center … END_OF_DOCUMENT_TOKEN_TO_BE_REPLACED