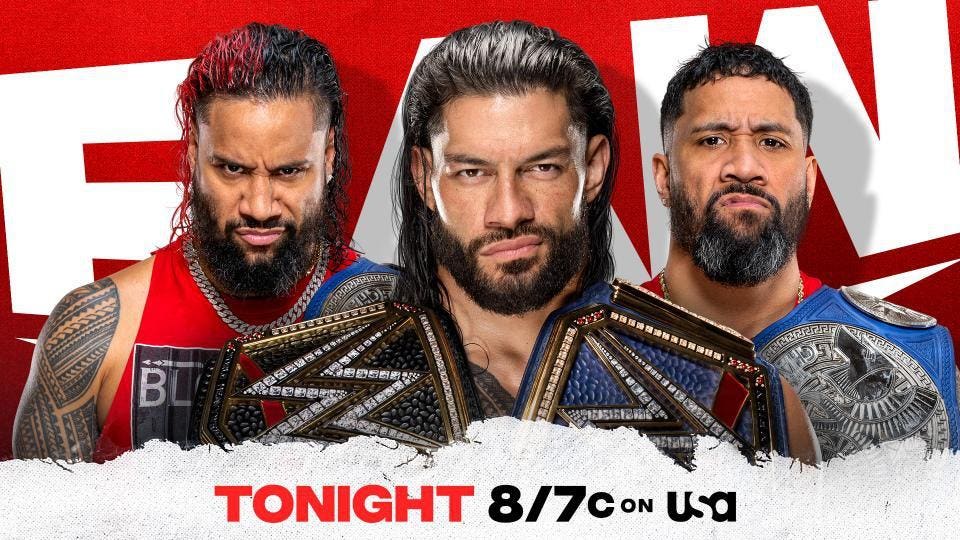 WWE Raw advertised the return of The Bloodline to Monday nights fresh off WWE’s controversial bait-and-switch for WrestleMania Backlash. This past Friday on SmackDown, WWE announced the tag team unification match between RK-Bro and The Usos will now become a six-man tag match pitting Drew McIntyre and RK-Bro against Roman Reigns and The Usos.

Fans were going wild for Roman Reigns, even chanting “Roman,” and, since Reigns is heel, Corey Graves described this as a mixed reaction.

When Roman Reigns and Drew McIntyre were alone in the ring, fans were really into it. Reigns vs. McIntyre really is a big match, I can see why they’re holding it off until a bigger show, but there were so many ways they could have avoided the bait-and-switch, including not teasing Reigns vs. McIntyre this close to WrestleMania Backlash.

The Street Profits continue to act like heels despite competing on the babyface team.

Ezekiel once again endeared himself to the crowd as a babyface. It’s looking more and more like this Ezekiel thing is going to work, and you love to see it.

Burt Hanson cut a fairly long promo (for an enhancement talent) before the Greensboro native was obliterated by Veer.

Veer matches should have the ambulance and EMT’s already parked outside of the ring. Not only would they make for a great aesthetic, but it could also save time.

Edge—who had to battle those pesky “what” chants—continued the cheap heat sports humor, which doesn’t fit this whole gothic vibe he’s going for. He recovered toward the end of his promo, however, whipping the crowd into a frenzy by challenging them to fight.

I’m not sure if wearing half of a corset makes Damian Priest come off as more threatening.

Priest, who is barred from ringside this Sunday, lost this match despite multiple interferences from Edge.

There was a big pop for Finn Balor and AJ Styles doing the “too sweet” gesture.

The Miz seemed thrown off by fans cheering loudly for Ali when he gave them the chance. It was emblematic of how much WWE overlooks Ali’s popularity.

Miz cut Mustafa Ali’s entrance and microphone short.He also called Mustafa Ali “Moost,” which could be in danger of developing into a chant.

Mustafa Ali cut a great babyface promo about leaving WWE, but it seems like the long-term plan is to feed him to Theory.

Theory permanently removed The Miz’s loss from the record

Mustafa Ali said Miz and Theory “talk too much,” which is certain to be in a Botchamania segment.

Theory had a reference to getting heat that flew way over this crowd’s head.

Mustafa Ali lost and was attacked by Ciampa. This doesn’t bode well for him after a promising start last week, but Ciampa is far more likely to win matches against Ciampa than Theory.

Nikki A.S.H. won the WWE 24/7 Championship in a backstage segment, only for Dana Brooke to beat her clean in a singles match.

The big news coming out of this segment was Dana Brooke saying she wants a divorce.

Seth Rollins was being petty with his appreciation night in response to Randy Orton’s 20-year Anniversary.

Fans showered Rollins with the chant from his theme song in honor of the occasion. Points of this promo made me think every Rollins promo needs to be under a spotlight because of how sharply they contrast with the dark.

Seth Rollins was great in this segment. This is the best his character has ever been, and it’s because this much-needed Cody Rhodes push is bringing out the best in everybody.

There was a storyline behind this match where Cedric Alexander requested this match in order to impress MVP.

Cedric Alexander got a surprising amount of offense on Bobby Lashley, which came violently crashing down after an errant dive.

This was technically Asuka’s return match, and she certainly deserved better than to have to share the spotlight with five other women.

There was a backstage segment that not only teased a Nikki A.S.H. tag team with Doudrop, but also the return of Nikki Cross.

Sonya Deville was stripped of her power after over a year of abusing it.

Despite entrances starting around 7:30 PST, these wrestlers only got about 15 minutes of ring time before Raw rushed off the air.

Liv Morgan got the pin and it was treated like a big deal, but unfortunately Liv is the farthest away from the WWE Raw Women’s Championship.

SEATTLE--(BUSINESS WIRE)--(NASDAQ: RDFN) —The housing market turned a corner in April as the inventory crunch showed signs of easing, according to a … END_OF_DOCUMENT_TOKEN_TO_BE_REPLACED

We present a chance to live like Rocky Mountain royalty right in the heart of Denver. “You don't see a lot of castles in the middle of Denver—and this … END_OF_DOCUMENT_TOKEN_TO_BE_REPLACED