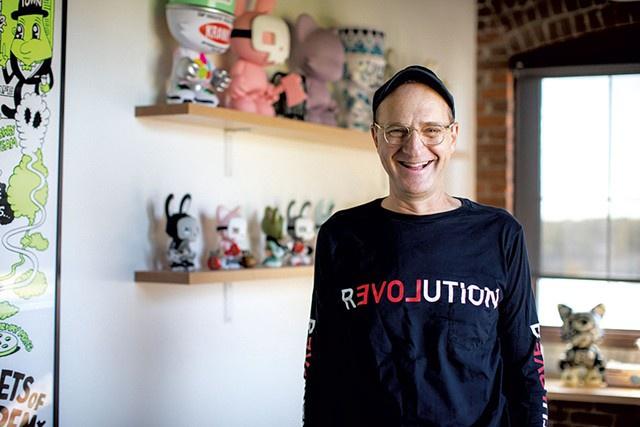 Superplastic is just one of several startups Kering has backed in the past year to explore disruptive business models without over-exposing luxury brands like Alexander McQueen and Yves Saint Laurent. Other recent investments include the second-hand fashion platform Vestiaire Collective, British luxury handbag subscription platform Cocoon.Club, and the shoppable streaming platform NTWRK. Gregory Boutté, Kering’s chief client and digital officer, says early experiments have shown there’s already a “huge appetite” for NFTs and that their exclusive and creative nature aligns with the characteristics of luxury goods.

“We see this trend coming up and potentially having multiple implications on our industry,” Boutté says. “We’re not quite sure exactly how, so we want to get situated in the house.”

A serial entrepreneur, Budnitz founded the toy and entertainment company KidRobot in 2002 before selling it in 2013. In 2014, he cofounded Ello—the ad-free social networking platform—and a decade ago began Budnitz Bicycles, a bike shop in Burlington that closed during the pandemic.

Next to his desk is a poster on a wall that reads “Death To Nostalgia,” a rallying cry that he carried with him from his KidRobot days. But that doesn’t mean he isn’t inspired by the past. His characters have been inspired by the past comics like Krazy Kat and Ignatz—which ran as a newspaper strip from 1913 to 1944. He also likes the Belgian comic duo Asterix and Tintin.

In some ways, Superplastic is a second act for Budnitz. Under his leadership for more than a decade, KidRobot did deals with a wide range of shows and brands alike. It made figurines for The Simpsons, Iron Man, South Park and Family Guy. They also collaborate with brands as varied as Volkswagen and Louis Vuitton along with shoes for Nike and snowboards for Burton. A dozen of Budnitz’s characters are still on display at the Museum of Modern Art in New York City.

Experiences with KidRobot also taught him a key lesson that’s now an anchor for Superplastic: To never give away intellectual property. He remembers creating new KidRobot characters that were optioned for future shows that were never made and shelved by some studio or another. Instead, he says he still gets royalty checks for a movie that was never made 12 years ago.

“If you look at how animated media is traditionally created,” he says. “An artist often has a great idea, they end up selling it to some big studio, and then the studio makes all the money, controls it, and generally often ruins it.”

Budnitz is also inspired by Walt Disney himself from the 1950s when Mickey’s maker controlled all of his own intellectual property. That control allowed Disney to “do his kind of weirdness and create a really transformed vision of a new world” across movies, TV shows, physical products and theme parks.

Digital celebrities and virtual characters have been increasingly popular. In March, former Disney CEO Bob Iger announced he’s investing in and joining the board of Genies–a startup with a $1 billion valuation that lets people create their own 3D avatars. Meanwhile, top Hollywood talent agencies are signing on to represent a range of digital characters born from popular NFTs like Bored Ape Yacht Club (BAYC), CryptoPunks and Meebits—each collection with its own network of brands, fans, content and commerce.

“This space we’ll look back on it like we look at social media,” says Sarah Early, a marketing executive at UTA. “Everyone will need to have a role in it and jumping in without a strategy isn’t enough.”

With Superplastic, the plan has always been about the characters—and all the movies, music, stories and sponsors that come with them. But growing interest in digital collectibles is perfect timing for Budnitz, who has a long history of creating and selling limited-edition physical items.

Bryan Rosenblatt, a partner at the San Francisco-based venture capital firm, invested back in 2019. When Superplastic announced its Series A round, Rosenblatt told Forbes that Budnitz is a “creative genius” with a track record of “building these cult-like brand followings and having a good eye for art and entertainment and business.”

“It was a totally different vibe from any tech company that I’ve ever been invested in or worked with or at,” said Moshe Lifschitz, managing partner at Shrug Capital, which also invested in Superplastic’s Series A round. “There was something about the way Paul was approaching building a company and taking a swing that was exhilarating.”

Real-world ambitions also help set Superplastic apart. It recently debuted a new vinyl art toy collaboration with BAYC. In June, it plans to open a store in New York City that will sell physical merchandise and have a secret room for NFT owners. It’s also working with a partner on opening a sushi restaurant and with another on an animated “comedy-hip hop-horror” movie starring Janky and Guggimon.

The big question will be whether Janky and Guggimon’s fans follow them to the box office, listen to their albums, buy their merch and travel deeper and deeper into their metaverse—wherever the rabbit hole might lead.

When the water slipped in, it was just a glimmer on the floor, a sign that it was time to go.It was Wednesday, around noon, and Darcy Bishop roused … END_OF_DOCUMENT_TOKEN_TO_BE_REPLACED

The union movement that kicked off across the country more than a year ago has continued its momentum in 2022, with workers in warehouses, coffee … END_OF_DOCUMENT_TOKEN_TO_BE_REPLACED